The personal advertisements of the RCH's 1% campaign would like to show conversion and the inner and outer change that comes with it. We have looked for real life stories with real flesh and blood people behind them, whose life, lifestyle and environment have completely turned around by receiving the gospel and through the service of the Reformed Church. During the ongoing 1% period, until the end of May, we would like to have introduced three stories of change like this. The first chapter of this series is about Zsolt, who lives a pure and hard life after quitting drugs. The motto of the reformed 1% campaign is: '1% support, 99% spirit.'

"I've lost control of my life."

Zsolt is 32 years old and has been sober for three years now, but before this he was using drugs for 14 years and homeless for nine months. After several rehabs and a conversion, he had to learn how to live his life again. Today he works, has a stable relationship and wants to lead a responsible life. We talked about fear, failure, acceptance and starting over with the people behind the faces of the Reformed Church in Hungary’s 1% campaign.

You gave your face and your story to the social campaign of the Reformed Church. Why were you willing to take part?

Out of gratitude. I’m so grateful to God for helping me face my addiction, and I’m also grateful to the co-workers of the Reformed Thrown Youth Rescue Mission (KIMM) and everyone along the way who helped me to be here now.

One can see it in your photos that you are on your way. Where did you come from?

I come from a Transdanubian family with four children. I have two older sisters, and I was ten years old when my brother was born. We already lived in the village by then, we had left town two years before. My parents worked day and night – my father even abroad after the transition – to provide everything for us, but in the end they didn’t have any time for us anymore.

Why did you start taking drugs?

I tried to draw the attention on me with bad behavior. I couldn’t fit in at school; I fought a lot to be left alone and not to be bullied. I started smoking just to impress the older boys. They accepted me, we played pool together, we drank, tried weed and other things as well. I felt that we were cool and we belonged together. The drugs suppressed my fears.

What were you afraid of?

I was afraid of loneliness. After a while my friends had left me, only the dope kept the group together. Eight sober months followed this and a love, but when we started having problems in our relationships I relapsed. We were on drugs for years. We only felt good when we were high. I left after four and a half years; I went to England to work, because I wanted to prove myself that I was able to quit.

I lived in really bad conditions; rather, I escaped. I was on the streets and stole. Indians and Pakistani took me in, and I was selling heroin on the streets at night. I was living in terror, scared to death. I wanted to quit, but they made me try heroin and I became addicted to it. In the end I was selling heroin to earn enough money to buy it for myself later, and took drugs not to be afraid at night in the dark allies.

Why did you come home?

I felt guilty because of my parents; I wanted to stop it once and for all. I was sick because of the withdrawal symptoms, was drinking to try to escape from my addiction, but it didn't help. I've been to psychiatrists, therapists and rehab. I finally realized at the KIMM drug rehabilitation home in Zsibrik that I am and addict. It was hard to accept, just as it was hard to accept the rules, but it was great to stay sober for a half year.

Why did you relapse?

Even though I've grown up, I remained a kid on the inside, who smoked the first cigarette because he wanted to prove something. It was hard to get back to real life again, when I had already gotten a pass. Everything was scary, I couldn’t handle the problems. I went back high, so they threw me out. My parents were giving me the chance until the end, but since I didn't stop taking drugs I had to leave home. I became homeless.

Was this the turning point?

I was living in a cellar for nine months among heating-pipes and rats. I had lost everything. There was nothing left to do but raise my hands and beg God. At that time a young Christian couple was taking care of me. They tried to appeal to my better self, helped me keep in touch with my parents, who arranged for me to go to the "Válaszút Misszió" in Budapest, and in December 2010 to the Drug Rehabilitation Home in Ráckeresztúr. The first night I felt that it might be over. I’ve been sober ever since, haven't even had a glass of beer. 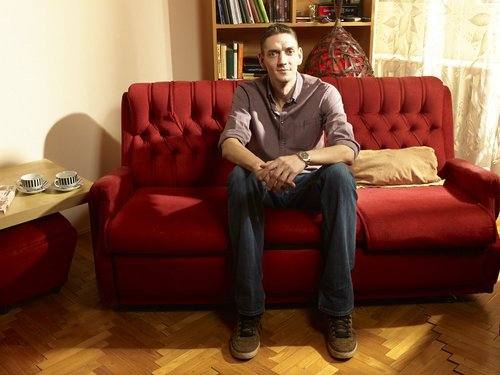 What happened in Ráckeresztúr, which made it possible?

I was in rehab for fifteen months; I was telling István Viktor, crying, about everything that had happened to me. I accepted that I had become a run-down homeless person and that it was not my parents' fault that I started taking drugs. I admitted that I had lost control over my life. I could lay down my burdens, and could forgive myself. At the end of rehab, I wrote letters to many people who had witnessed my addiction and whom I had hurt.

How was it to be out again?

Scary. I got the necessary help at KIMM for starting over but I had to come along on my own. After being homeless I had to learn to wash myself again, how to sleep in a bed, then how to build relationships, communicate at work and how to take responsibility for myself and others. The mission helped me to find a temporary flat and an internship place. I got to know a girl. I had a dog, my own place and a position at an advertising agency. I was afraid of what the people might think of me, but thanks to God, my partner and my colleagues know my past and accept me.

For the sake of the 1% campaign you went back to the cellar. How was it to face your past again?

Hard, but enlightening. I would make every drug addict do it after a few years, because it puts one off everyday life and makes you understand that even today my life is about one thing: struggle. My life isn't easier, I'm just afraid of other things. If my dog is ill, if I have too much stress at work or I fight with my girlfriend, I can’t help thinking that I could go back to drugs again. This reflex is like a thorn in my body.

What has changed then?

I’m not alone. This sentence is in the Bible often: 'Do not be afraid.' If God is with me, then what could happen?! I used to hate myself, but now I don't try to escape loneliness. I can feel well alone as well, and sober. I’ve experienced that one can get out of such depths, and it gives me the strength to keep on fighting. I have a reason to fight and I can learn from every hardship I have to face.

You have said you are on your way. Where exactly are you now?

At the very beginning of the journey. Sometimes I feel like a child who has to (re)start his life now. On the longer term I would like to get married, have children, a family house and dogs. I am much farther along than I was a year ago, and I hope a year from now I’ll be even farther ahead.

Each year, taxpayers have the ability to direct 1 percent of their income taxes to a church of their choice, and an additional 1 percent can be given to another recognized NGO. The church greatly relies on the taxpayer's 1 percent donations. Its core budget includes the operation of all church levels and ministries, excluding congregations, pension fund and the operation of church institutions.