The Hungarian Reformed Church Aid reflects on the first year of service for the Life Belt programme. Launched last Advent, it a project that strives to aid families devastated by the crash of foreign exchange loans in the form of housing assistance.

The Life Belt Programme, launched by the Hungarian Reformed Church and the Hungarian Reformed Church Aid in December 2011, is a financial support programme which was created for families who have both the desire and the will-power to make a change in their life. The programme was launched with the aim of offering external help to families who have lost their homes due to the crash foreign exchange loans. Along with a temporary solution for their accomodation, they receive help in the fields of mental hygiene and life management, which means the prevention of their social exclusion - a sad but natural consequence of losing their home. The programme also provides protection against the disintegration of families, assistance in restarting careers and help to establish a decent and maintainable financial status.

The practical implementation of the programme started with three families moving into their new temporary homes in December 2011. The number of families joining the programme is gradually growing: the foundation has so far given assistance to 25 families. In the course of this past year, over 190 applications were submitted, out of which 20 have been put onto an urgent list. The others, however, had to be informed that their needs could not be fulfilled in the near future.

During the first year of Life Belt, we observed with great expectation the families' efforts to establish their own independent life. We were curious to see the results of our practical help. Currently, we can say that families approaching the end of their support period have a great chance to continue their independent financial life, provided that they maintain the determination necessary for success. It is always our intention to attempt to "save" families at their own place of residence, as this puts the least possible burden on families and society itself. 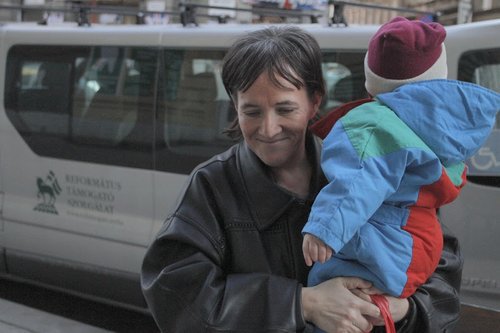 In order to share experiences and provide help more efficiently, from the summer of 2012 onward we have regularly cooperated with other civil organisations, such as the Hungarian Maltese Charity Service. We have also launched a charity campaign called "Adopt an evicted family." Fifteen sponsors have expressed their wish to support the programme, and several of them have already taken action.

From the start, the programme has been given significant media attention. Various articles have been published in the EuroDiaconia network as well. The foundation has regularly been approached via family support networks, which indicates that experts and specialists of the field are familiar with our activity. It is with humility that we acknowledge the fact that the Maltese Charity Service's own initiative, a much older and rather productive charity programme called Hitel-S was inspired by our foundation and our Church.

As a conclusion, let us recall two significant developments that followed the quick and efficient launching of Life Belt. The State Secretariat for Social, Family and Youth Affairs at the Ministry of Human Resources asked to consult our foundation regarding the operation of the new "settlement" currently being established in Ócsa for evicted families. Also, the Hungarian company in charge of purchasing the properties of families who lost their homes has turned to us with the request to launch a nationwide programme similar to Life Belt, in order to mentor these families. Our initiative has been very well received in Hungary, both in professional circles and by individuals in need. We hope to continue our efforts as we gather more and more experience in ways to provide practical help and encourage families undergoing trials and challenges in this era of financial difficulty.