Teachers have to gain experience at schools, medical residents at hospitals and theologians in congregations before they start their life-long professional careers. Hunor Attila Koncz - spending his fourth year at university, studying theology - decided to spend his internship in Geneva, the cradle of Calvinism. In the city of businessmen, babysitters, diplomats, and Hungarians that immigrated there in 1956, his mouth became parched during his first sermon but he stayed for another year. The Hungarian Protestant Church of Geneva’s resigning pastor spoke about the pastor’s role, the mission and the inspiring heritage.

Services in Hungarian have been held in Geneva since the Reformation. At first, students from the city and later, during the World Wars, refugees attended the service. Since 1956 the Hungarian Protestants of Geneva constantly gather together. For decades, mostly retired pastors served there, but since 2006 the scholars of Bethlen Gábor-Claparádé studying theology have been requested for the ministry. Thus, the Hungarian theologian scholar of Geneva becomes the city’s Hungarian congregation’s pastor.  The dual role requires aptitude, but it is not impossible to fulfill their commitments. The theology student in Budapest, Hunor Attila Koncz, not only decided to undertake the task before knowing what he will have to do, but after he completed his internship he stayed for another year. At his request, the seminary in Budapest, and the Danubian Reformed Church District contributed that he can spend his advanced sixth year internship in Calvin’s city, as the pastor of the Hungarian congregation.

He found himself dropped in deep water when he arrived in Geneva – Hunor Attila Koncz started his report en route to the congregation in Geneva, where the theology students of Budapest will serve.

- I was spending my fourth year at university, and I was in many ways immature and untested. My service started here, when I was preparing for the big ecumenical worship sermon on the 23rd of October, and my phone rang during the night. I had to go to the hospital because the former president of the Hungarian Association of Geneva was dying. First I had to realize that this was real. I was really confused: Who am I for this job? I remember the first sermon. I brought water for myself up to the pulpit. My mouth dried up, and I mumbled, that now I am going to drink. At first I was confused about my role because I was a student. I was accepted into the congregation, but I did not contribute to the offering, how could I possibly express my opinion? It was also a question of who was going to lead. The pastor’s position is not permanent. The elders make the decisions because they take long term responsibility. It was very embarrassing that Geneva is very diverse. There is CERN (European particle physics research center - ed.), diplomats, business people, babysitters, people from 1956 and respectable historical figures. Who are you? A student in his fourth year. Who are you to be at someone death bedside? A beginner in deep water. It became more and more obvious that “you are nothing”, but “I am the Lord”. My relationship with Him became evident – it helped me to lead, when I had to organize something or speak. I also had to realize, that the pastor’s role is very important here, because he represents the word of God, but no more. And from this point this would be his prestige. 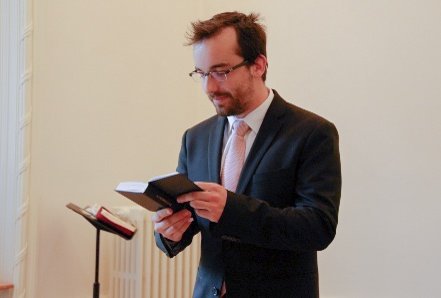 Statistics show that approximately 500 Hungarians live in Geneva, and about 200 people have Swiss citizenship. According to Hunor, the Hungarian Association of Geneva estimates the number of Hungarians there at about 2000, as there is a large flow of workers that are often on temporary commissions in Geneva. In 1956, Hungarian emigrants, babysitters, business people, researchers and prostitutes were among them. Here, CERN, the UN, biological researchers, and companies have settled for favorable taxation…A variety of people come to Geneva, and if it’s in their interest, they will be gone in four years. They got here, trying to find their places, and their means of living. There are people, who just say: “Let’s see whether I get a job”. In the uncertainty, they are counting on hearing Hungarian words, even if that Hungarian word is the word of God. The congregation has to be a shelter for them. Our community experiences this kind of flow, not only around us, which is why it is very important to realize who will form the core, and will presumably be here longer to accept the newcomers. Two people are enough for this, and they have already changed the atmosphere. After we started to talk about, this 12 people became 35-40 people, and when people come they say: “Thank you, that I have found my home among you!” The Hungarian Protestant Community of Geneva holds worships not monthly, but once every two weeks, and this says a lot about how the atmosphere became like we are family. At this time young and old gather together to talk and offer each other cakes. According to Hunor being an immigrant is a gift, because stronger friendships can develop far away from home.

The cultivation of relationships is essential for the mission. The young theologian plays basketball, has a beer sometimes with friends and became familiar with winter sports. Perhaps he mostly fell in love with folk dance.

- During the time I spent in Geneva, it became clear where I belong. Not because I like folk tales or folk music, but because I understand these.

He says, that dancing helped him find himself and to be more determined in church service.

- When you dance you have to hold the girl, and that is the task of a boy. Every time I went around the girl, I could not hold her against me. It was a great gift for me that during rehearsals I realized, that I was able to do these things, and I began to appreciate my sex, my role. Sometimes we only confess our sins over lunch, so in the same way I confess that sometimes I cannot lead my life as God would want it, and I do it by singing. I appreciate that in the Hungarian Protestant community in Geneva this can be done. If a pastor is to lead, it should be done this way. Why would anyone admit their mistakes, if the pastor cannot admit his own? By doing this, things get in their places, the heavy weight would not be on your shoulders, and you would not become lonely.

Be a student abroad and as serve as a pastor even though you are still studying theology – from these dual roles he felt more inclined with practice – said Hunor. He really liked the Genevan theology, because he could assert his own timetable, and as he said, the professors raised the students’ attention by motivating them. Still, he was waiting, that he could swim in the deep water of service.

- I spent most of my time at the congregation and with the Hungarian community in Geneva. I have not really learned the French language. We used to say that Geneva is a wonderful Hungarian village. It is obvious, that I have lived here in a shell, and these past two years went by so fast, and maybe it was not useless for the congregation either. There is a story that illustrates this well. A man walks on the beach, collecting shells, and throwing starfish back into the sea. While doing this, a person says: “Look, the sea ripples, these starfish are on the shores after you have gone five hundred meters. What you are doing is making no difference.” What did he reply? “It makes a difference for this one I am holding.”

Hunor said, that the ministry among adults is what he enjoyed the most.

- During my first year, five adults had a confirmation. Among them was one of the big company's marketing manager, who is responsible for European issues. Suddenly he said: "If that is what the gospel says, then I have to rethink my whole life." Then I also felt,  who am I to be a witness to all of this ...

The theologian honestly talks about that despite some spectacular results, something broke inside him. Today he is grateful for that – he says.

- The adult baptisms, confirmations, when people converted to faith, after all of these I said to myself: "That was beautiful, Hunor, no wonder you're welcomed to run for the scholarship again" But there was a turning point… With the theologians of Budapest I went on a study tour in Scotland, where someone threw in my face that I was snobbish. I think he was right. I had to think about it, that's all right, I began to learn something about leadership, now, but who is this coming from? Whose love helps me be able to serve? I do not have the kind of heart, that helps me do these all by myself. There was the temptation to attribute the results to myself, but I had to sit on the proper "pot", into which I would not fall into. For me, to be in the right place is more important that doing everything the best. Sins are only symptoms of the fact that I am not satisfied with myself as a creature made in the image of God; that I do not accept the gift of God, do not accept how He created me, but instead I want to be something else. I want to be something that I am not, something that hurts me. I owe a lot to the Professor of Theology in Budapest, John Brouwer, whom I could talk with honestly. I realized during the conflicts that I am here to love the congregation. God wants to use me in this, and its kind. He does not want to use nice words, but the way I can love, the way I can lead with my body weight during dancing, or my character in everyday life.

He made friends, became richer with a few recipes and gained a few pounds in Geneva, but it is just a striking difference compared to himself two years ago - Hunor smiles.

- I had to ask myself again whether I want to be a minister. My experiences here have strengthened my identity. It is good to be a Hungarian man who belongs to God. Despite all my mistakes, God has blessed me, and I got a lot of feedbacks from the congregation, which was also new to me. That is what makes this experimental service beautiful, because ultimately this time was an experiment.