2016 marks the 60th anniversary of Hungary’s 1956 Revolution. In memoriam of these events, the RCH Synod held a special session meeting, a Synod of Remembrance, which was attended by prominent leaders in the community. During the Synod meeting, the RCH approved a special memorandum to commemorate the Hungarian Revolution and Freedom Fight of 1956.

The 23rd of October is the anniversary of the 1956 uprising in Budapest against the Soviet regime in Hungary. It began as a student-led demonstration which marched through the streets of Budapest to the Parliament building. As they marched, students announced a list of 16 demands for the government. Violence broke out on the streets when demonstrators were fired upon by the State Security Police outside the radio building. A short lived revolution spread throughout the country that was ultimately unsuccessful when the Russians again stormed the country on 4 November. 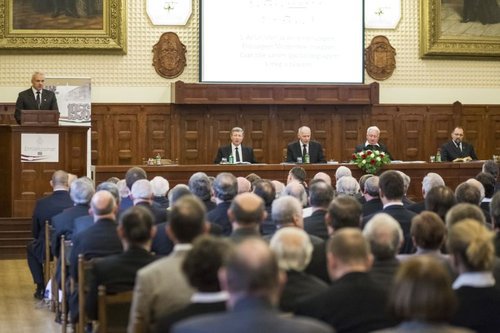 In commemoration of the 60th anniversary of these events, the RCH Synod held the fifth meeting of the 14th cycle in Budapest on October 14 dedicated to the remembrance of the revolution. Here, they accepted a memorandum highlighting what a profound impact the 1956 Revolution has had on Hungary. The special session of the RCH Synod was attended by prominent members in the community as well as by delegates and representatives of RCH congregations and institutions.

Prime Minister Viktor Orbán then gave a word of greetings to all who were assembled. His speech was followed by more lectures from expert historians about the experiences of churches during this time period. 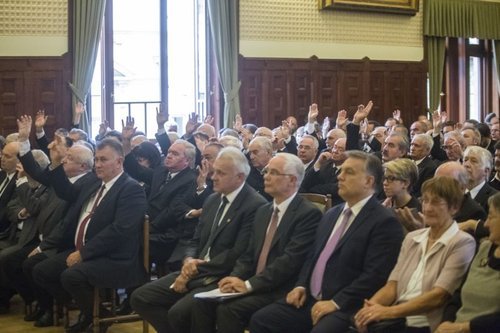 According to the RCH’s special memorandum of the Hungarian Revolution and Freedom Fight of 1956, the 1956 Revolution is testimony to Hungary’s love of freedom, the power of combined forces, and the notion that truth will prevail above all. The Hungarian citizens involved in the revolution provided an example of sacrifice and heroism to not just the free world, but to those countries that were also under the control of the Communist dictatorship. The freedom fighters involved in the revolution stood up for their principles in a firm and courageous manner.

It is this courage that has made the 1956 Revolution a crucial part of the Hungarian national identity, despite the fact that the revolution was eventually crushed.

The RCH hopes that this memorial year will provide Hungarians with the opportunity to express gratitude to those who gave their lives in the 1956 Revolution, appreciate and better understand Hungary’s past, as well as experience a sense of reconciliation for the events of the past. Nearly 30 years after the fall of Communism in Hungary, this event has become a part of common national celebration.

Following the Synod, there was also a wreath laying ceremony at the Memorial of the Martyrs of 1956 at the Reformed Budapest Seminary.

Several seminary students were wounded in the street fights in 1956. Ferenc Batka, student of the Theological Academy in Sárospatak, was killed in the fusillade at the Parliament on 25 October and two other martyrs, István Magócsi and Lajos Herczegh from the seminary in Budapest, were killed a short distance from the seminary gates. A memorial plaque in the courtyard of the Károli Gáspár Seminary in Budapest honors the two students' memories. According to witnesses, they were killed while out buying bread for the college's kitchen.

More than 3,000 people were killed in the revolution's fighting, among them 720 Soviets. Thousands were sentenced to prison in the reprisals, but the true long-term effect of the uprising was the resulting Hungarian emigration, considered a new "brain drain" – more than 200,000 people left the country, mainly young people.

Once the wreath laying ceremony was complete, the Synod meeting ended with a worship service celebrating communion at the Kálvin tér Reformed Church, led by Bishop Károly Fekete of the Transtibiscan Church District.

The church leadership of the RCH hopes that the events of 1956 will be an opportunity to unite Hungary in a deep way, giving citizens a way to join forces to preserve and pass on national treasures and stories to the next generation.

Through this special Synod session, the RCH encouraged church institutions, including congregations as well as diaconal and educational institutes, to create worthy manners of commemorating the 60th anniversary of the Revolution so that the memory of both the victims and the heroes will be preserved. The church seeks to support local commemorations and encourages surviving victims to share their personal stories of struggle and triumph during this time with those near to them. Sharing these stories with the next generation is a crucial way to keep the events memorialized in our collective consciousness.

You can read the full text of the Memorandum of the Hungarian Revolution and Freedom Fight of 1956 here.