The corridors of the primary school in Göncruszka are covered in lights. The teachers and the children are preparing for Christmas together, where even the sport hall is decorated with the text of the Lord’s Prayer.

The celebration lightning is taken down on January, but the light remains. The small town of Abaúj county was namely entirely renovated by the pastor couple serving there. Rev. Levente Sohajda inherited the apiary (bee farm) from his father, and from its revenue they renovated the school, the kindergarden, and the local church. He told us about the mindful holiday preparation, the ways leading to God and experiencing the Good News of Christmas in extreme poverty.

How many gingerbreads are prepared in Göncruszka during the Advent season?

It depends on how much time and energy we have, since there is no lack of honey. We are preparing for Advent, during which gingerbread plays a big role, but the most important thing is to recognize that Advent means quality time, it’s only once a year for a reason. At the end of the year we are getting stuck in „end-of-year” rush, like everybody else in this country, and it can very easily steal time from the Advent season. That’s why it’s important to bring mindfulness into holiday preparation. 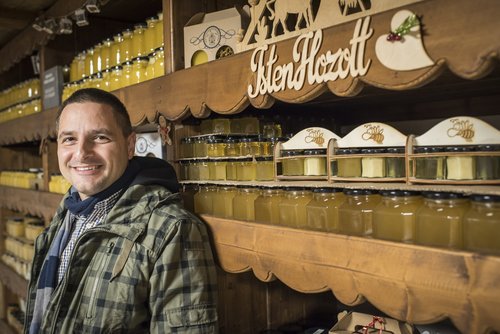 One would think that in a small village like here in Abaúj county it’s a bit easier to slow down.

Maybe it’s like that in many villages, although we don’t feel this way. Fifteen years ago we could experience that a busy farming season was followed by some more loose moths in winter. But our congregation has to hold on in many areas, thus we have time to relax only if we create for it some.

How can you create more time?

It’s a great advantage, that there are many institutions run by our congregation so many of the members are working together on a daily basis. We pay attention to each other. I think that most of the time if we want to do well, we overburden ourselves. We have to recognize that there is a time where we lose the point if we want to do everything “too well”. If we don’t experience the feeling of salvation over and over again because we are carrying with us conflict, misunderstanding, or some annoyance, then we become separated from each other. If we become strangers instead of sisters and brothers in our community, then something gets lost from the Kingdom of God.

Here in the primary school of Göncruszka, where we are speaking, There’s a lot of bustle even at 3 pm. How can you calm down your body and mind? Can the children be taught this?

If they have a place where they can experience the joyful and ecstatic moments, then they can also embrace the silence. During morning devotions, where almost two hundred children and teachers are are sitting together on the ground in a room, there is usually not a hiss - and not because we punish them when they speak, but because in that moment we can pay attention to what’s happening in that silence, hymn or sermon. 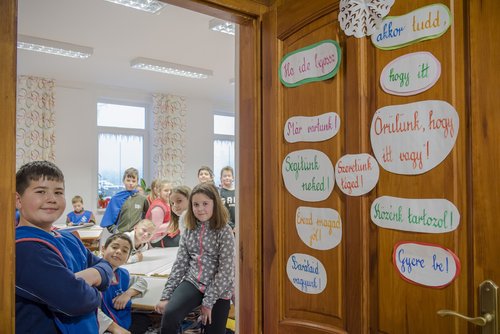 In this school the children get a message for Advent, for Christmas. Are they bringing that home?

We ask the children to pray at least three times for their parents at home, and to try doing it together. These kids are very serious messengers, little angels, because they go home and say: “mom, dad, I want to pray for you now”. Maybe not all of them could succeed, probably most of them couldn’t . But it’s enough if it begins in some families. If we teach the children to pray, then we accomplished everything indeed. Of course it matters too, which marks they have in Literature and Maths, but they’ve already made the biggest step to become a person, because they know that there’s a way to the living God.

Are there any examples that this way leads from the children to the families?

Many of them. Our congregation has eighty members and this year fifteen members had their confirmation. It didn’t happen here in Göncruszka since 1954. Out of the confirming fifteen, six or seven- being around ten years old- were baptized. They didn’t come from that type of family where they expect them to confirm in order to get the tablet they wanted. There is no such motivation in the background, but these young people decide for themselves to make a confirmation, which is not mandatory, not even easy, because here they need to learn the Heidelberg catechism by heart. For this they should be curious and open, by which it’s good that they are teenagers because it’s the period when they question everything. The majority of our confirming youth stay in the congregation and only a minority leave it. It was the opposite beforehand. But to reach them there needs to be openness and inclusiveness from the community too, if someone comes with dreadlocks or in torn jeans to church they need to be accepted and not judged. It’s also important for the youth to find their own role inside the congregation. For example here, where we are sitting now, we made the cladding with the youth in the summer. 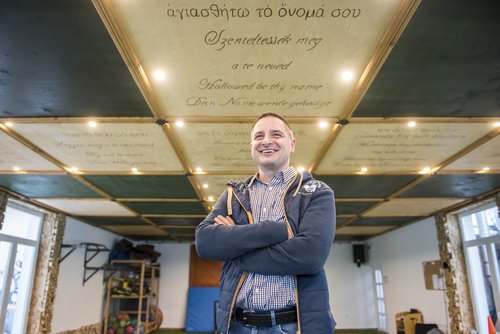 How do you prepare for Christmas?

We have a very nice program during the Advent that was started by a pastor colleague of mine, it’s called Turning the Other Cheek. It’s explicitly for men, and starts with Thai boxing training. When we get all tired and worn out, then a Bible study group follows. In this Advent season it’s a father-son program. It has a beautiful message about the generations living together, the responsibilities of the father role, the recognition of being a boy. Here we recognize something physically through an unexpected hit or psychologically through words of our sons.

And what about the girls? Is it their only job to roll the beigli dough?

No, they have their own circle too. But we have baked the Advent bread just now in our new furnace. The children kneaded, there are many in the congregation, who know exactly which flour to use that makes the bread tasty. All these programs mean that Advent is not a passive waiting. We cannot expect that somebody will do something for us. Advent is rather an inner preparation, as Jesus asks his followers to stay awake with prayerful souls in this waiting - through an activity in which you turn to God and also to each other. Out of this an enormous collective joy is born.

It’s said many times that the walls of the parish house are made of glass, and according to Rev Levente Sohajda being a Reformed pastor is a very peculiar lifestyle for which one can be either glad for and have a happy life, or if not, then shouldn’t do it, but it’s very joyous for those who are called for that. “I open the gates of the parish at 6 am. and then close them at 11 pm in case I forget it - he said - It’s a symbol that anyone can come in anytime and will find someone there whom they can talk and pray with.’” Like he says, he wouldn’t live in a parish house to where the members of the congregation cannot go in. They even have an “open day”, when one hundred and eighty children can go in and be “rambunctious”, because he would like them to know that “it’s not my house, I’m just living here with my family. It’s a place for the congregation, which was built to serve together the Kingdom of God.”

You have been serving in Göncruszka for fifteen years. Which is the Christmas memory you like thinking back to the most?

The occasions where we can experience the real meaning of Christmas, like a church service. These become unforgettable for me. I don’t think that every occasion we have in the church can be a true worship, because that requires many elements. The Lord certainly wants to arrive, but how we are as a congregation, how open we are is another question. The really memorable Christmas moments were when families found each other. When there is reconciliation between a mother-in-law and her daughter-in-law or between a teenager girl and her father. For me these small personal presents are important, not only if there are two hundred people taking part in church service. But I have bad examples too. We have a tradition that every child who comes to church gets a nice gift. In Göncruszka there are a lot of children in foster care so it’s a great responsibility of the Christian community to spread with every means the message that God has really sent his only child to the world, and everybody can be a part of this gift. Giving presents is a symbol of this. So, we have a lot of presents under a beautifully decorated tree, which we give the children after the service. We wanted to make it in the village of Vilmány too, where there is extreme poverty. We went there and when we started to take out the packages from the bus, suddenly a group of eighty people rushed at us, surrounded the microbus and almost overturned it. There I felt that something was finally lost. It has so deeply affected me, I could hardly come around at the celebration because there is a reason why we think anything we can get is ours. We make the world this way, so even Christmas won’t be Christmas. 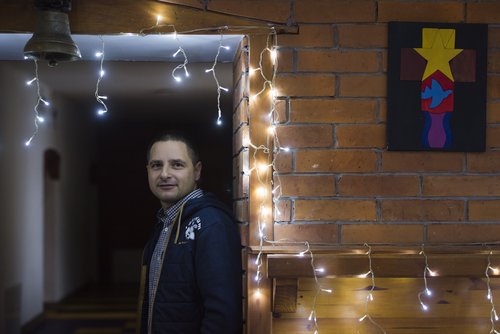 What is Christmas like in families living in extreme poverty?

Sometimes it’s more beautiful than for those who aren’t in a difficult situation. It always depends on the person, on the family, the extreme poverty in itself isn’t an obstacle of love. Moreover, we see that it’s not an obstacle to turn to each other and to God. Sometimes it can even help that feeling that “yes my Lord, maybe today we have only as much as bread as we eat, but it’s from you”. It’s very difficult for a wealthy family to admit. It’s easy for them to deal only with themselves, not expecting anything from anyone, and it describes their Advent season too. At the same time a celebration in extreme poverty can often come down to having alcohol, drugs or pills. And it poisons everything.

What can you do about it?

Most importantly, we preach the Word of God. I don’t believe that anybody else than the Son of God could bring change here. You could try different programs, but they are just like makeup. You can make the wrinkles disappear for a few hours, but essentially one’s life won’t change without the salvation of Christ. He brought change however, and we can rely on that. And if it makes teachers pay more attention to the children because they were called there by God, then there’s the Redeemer in their work, who brings the change. It’s the same by the pastors. Despite the fact that they overturn and rob the bus I still won’t give up, I won’t go to Budapest or the other side of the world as a pastor, but I stay and I try it over and over again in different ways. Because if the Redeemer who brings change wants to be here, so should I. I have confidence that He called me for this, wants to see me here, wants to bless me here, wants to pull me out of the abyss, wants to get me back on my feet, wants to see me laugh and cry here. And for me it’s fully enough.