This year marks not just the 500th anniversary of the Reformation, but also the 450th anniversary of the Debrecen Synod, where the influence of the Swiss Reformation prevailed in the city and played a crucial role in the stabilization of the Reformed Church. The RCH and wider Hungarian church have much to reflect on in the coming year, and ecumenical guests in attendance at the Debrecen Reformation celebrations helped to get the conversation rolling. 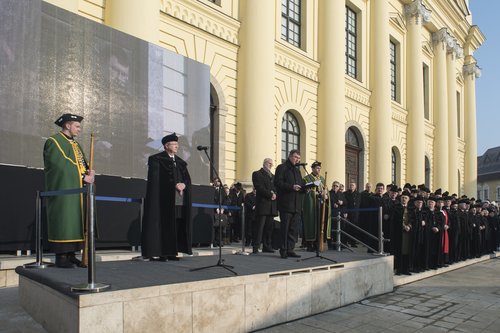 The morning of January 31st began with an opening ceremony outside of the Great Church in Debrecen where both Hungarian and international speakers gave words of greetings, prayers, and then officially opened the Jubilee year. At this time, the Reformation storymobile was opened and visitors were invited to explore the exhibit inside the truck, record videos about what Reformation meant to them, and also see the other Cities of Reformation that the storymobile would be traveling to over the coming year.

Debrecen is part of the City of Reformation Program, organized by the Community of Protestant Churches in Europe, and has been awarded the title, “European City of the Reformation”. The RCH, through Debrecen, is also taking part in the European Roadmap program, under the organization of the German Protestant Church (Evangelische Kirche in Deutschland), which captures the many voices of the Reformation through a cross-continental trip with stops across Europe that were vital to this transformational time. A waystation was located in Debrecen and a storymobile visited on 31 January, 2017 to take visitors on a Reformation journey. The truck will continue its route around Europe in the coming months and will eventually end in Wittenberg in May 2017, just in time for the World Reformation Exhibition titled, “Gates of Freedom.”

As Moderator Arends from the Church of Lippe said at the opening of the European Roadmap program, " With this celebration you express in a wonderful way what shall be emphasized with the European Roadmap according to my view. I believe that 500 years of Reformation means more than focusing on a person or a location, even though the release of Martin Luther’s Theses gave the reason for the celebrations of this special year."

Following the storymobile, guests entered the Agora – a place where people could gather to learn more about the RCH’s ministries and listen to personal testimonies about how being reformed influences our lives. Speakers from around the world reflected on the question, “What does Reformation mean for me and my community?” and shared a short personal testimony on how they see the spirit of the reformation shaping their personal lives and the ministry of their church today. Hungarian Reformed Bishops from Slovakia, Transylvania, and Transcarpathia shared their reflections along with six Ecumenical guests from Lithuania, Spain, Scotland, Taiwan, Germany, and Greece. 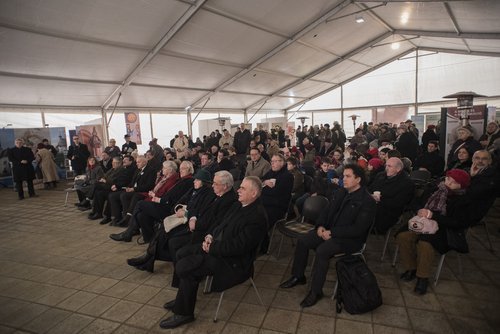 The highlight of the event was the Jubilee worship, held at the Great Church in Debrecen. The opening address was given by the Rev Károly Fekete, Bishop of the Transtibiscan Reformed Church District. Bishop Fekete spoke about the theological challenges that have arisen over time in the Hungarian context, saying that “Responsibility for the community, next to the search for the individual salvation, became a special characteristic of the Hungarian Reformed church. This kept the longing for the freedom of religion and for national independence alive in our hearts.” The Bishop stressed that a sharing stories was a sign of solidarity and that it is through this practice of deep listening that, “we can enter into genuine solidarity with each other and with the story of Christ.” 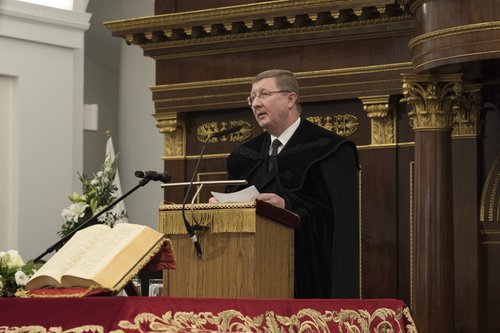 The sermon was given by Dr István Szabó, Presiding Bishop of the RCH, and centered on the question of whether it would it be easier or harder to have the Reformation now than when it happened 500 years ago? “It is in Christ that the matters of God encounter and become united with the matters of man, and vice versa – these two become one and inseparable,” said Szabó. In his reflection on Revelation chapter 22, the Bishop told those in attendance that Christ does not use a uniform template for all situations – he does not want everyone to be like the people in Ephesus or Smirna, rather, Christ wants everyone to be more like him. In the end, Bishop Szabó said that he did not have the answer as to when the Reformation would have been easier, in the past or in modern day, but instead he left churchgoers with this important message – “What we do know is that God does not give us wings to fly away. No, we have a purpose and a task here on earth and we need to hear it today. The Lord of the church says, ‘Here I am. I stand at the door.’ Our task is to say, here and now, in our own time, ‘Come, Lord Jesus.’” 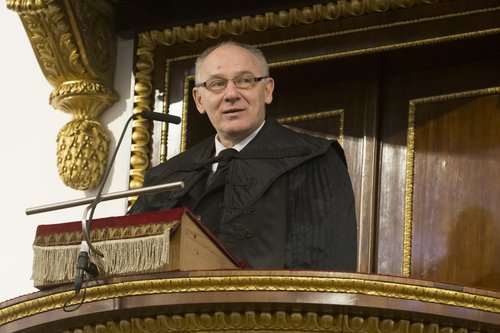 Following the service, Rev Bas Plaisier, Vice President of World Communion of Reformed Churches, gave greetings on behalf of the WCRC. He shared his delight in being a part of the ecumenical program and said that in celebrating with sisters and brothers from around the world, the RCH is truly an example of what Reformation looks like. “The catholicity of the Church - which for our common ancestor Calvin was such an important part of the confession, means that we always have to look to ourselves as a part of the worldwide body of Christ,” said Plaisier. He ended his speech with a call to churches around the world to, “acknowledge the longing of many young people, who are telling us that change – reformation – in our Reformed Churches still is necessary  and that we have to do what we are saying and praying. They ask us to take the Gospel and the Sola Scriptura, the Sola Fide and the Sola Gratia serious and really practice it. The German poet and philosopher Goethe ever said it very powerful: ‘It is not enough to know – we also must apply it; it is not enough to want, we also must act.’” 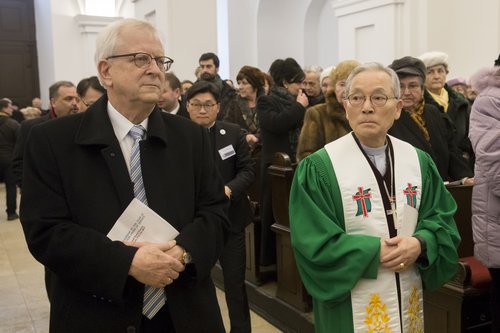 Beginning 2017 with such a show of Reformed fellowship truly sets the tone for the year to come. 2017 will be a year of great reflection as the RCH continues celebrating and discussing the important themes of the Reformation and the Debrecen Synod, two important historical events that contributed to the shaping of the church. The year of Reformation calls churches around the world to find refuge, strength, and hope in the Triune God and to take seriously the call to ecclesia reformanda.

A group of approximately forty Reformed brothers and sisters from around the world gathered in Debrecen to join in on the RCH’s Reformation celebrations. Ecumenical guests represented churches from Taiwan, Scotland, Germany, Italy, Greece, the Netherlands, Spain, Ireland, the United States, Poland, Canada, Lithuania, and Korea. Church organizations represented included the World Communion of Reformed Churches and the Community of Protestant Churches in Europe. See the full list of International Delegates in attendance. 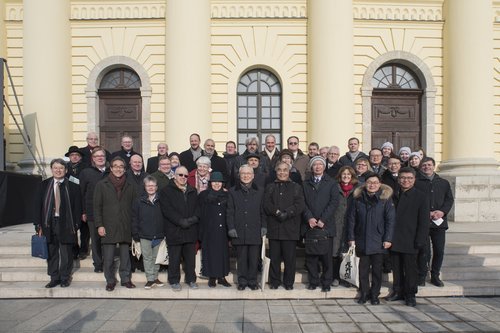