Visitors from around the Carpathian Basin and beyond gathered in Cluj-Napoca, Romania to celebrate the election and installation of Béla Kató as the 46th bishop of the Transylvanian district of the Reformed Church in Romania.

The ceremony was held on 1 February in the Farkas Street Reformed Church. It included a swearing-in of the new church board as well as a ceremonial laying-of-hands after the bishop recited his vows. Kató served most recently as the district's Deputy Bishop from 2000-2012.

Gusztáv Bölcskei, Bishop of the Reformed Church in Hungary, started the service. Bölcskei spoke on a passage about Gideon from Judges 6. He referenced that it is tradition in the Transylvanian Church to have a confession and assurance of pardon at the beginning of the liturgy, and in every confession, one must face his own sin – recognize his own responsibility – before blaming anyone else. He said in the Scripture, Israel tried to survive when they felt God had abandoned them, and in these situations people are inclined to turn toward their glorious past. According to Bölcskei, the people of Transylvania are masters of survival, but he questioned if it is enough to merely have this mentality of survival.

Later, he read an excerpt of a bishop's report from 1927 that outlined what was necessary from the Reformed Church. "What we need is a self-conscious Reformed Church," it said. Bölcskei concluded his sermon with a challenge to live in this way, saying, "We should dare to believe that we can be the means of liberation." 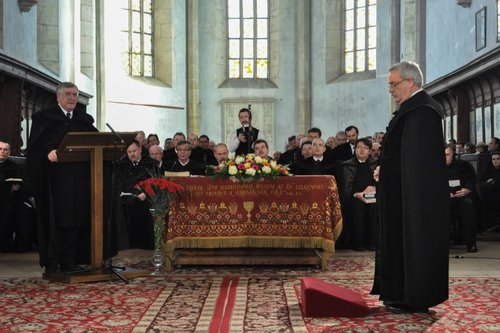 After taking his vows, Kató gave a message based on Luke 5:1-11. This passage tells of Peter's frustration after a fruitless night of fishing and Jesus' call to return to the water and continue fishing. He said that Peter's reactions are very human. "He's tired and desperate. He wants to accept Jesus' help," Kató said. This image he said, describes the situation in Transylvania. The churches are emptying and people are not seeking out the church. Pastors see this tendency and they feel there is no hope, but the life of the church is not only done within the church building, he said, it can be found in everyday places.

He continued that like Peter, the church also has doubts. It is working for the congregations but still people are disappearing. And in spite of everything that has been done in the last two decades, the church has lost one-third of its membership. But he said, with negatives come positives. There is no shortage of pastors wanting to learn and teach. There is support from mother Hungary and around the world. He concludes that in the passage, Jesus enters when they are without hope and the boat transforms into a pulpit. "Jesus appears when we face a time of nothing," Kató said. And the church must answer as Peter answered, "However" – "However, I will go out. If you say I can, I will follow you."

Leaders from Reformed communities throughout the Carpathian Basin as well as politicians and ecumenical partners participated in the event, offering words of greeting to the newly installed bishop. The delegates came from Transylvania, the Hungarian church districts, politicians from the Romanian and Hungarian governments as well as ecumenical partners in Romania. These Romanian partner churches were represented by IPS Andrei Andreicut, Metropolitan of the Orthodox Church and Exc. Msgr. György Jakubinyi, Cardinal of the Roman Catholic Church. International guests from Germany, the Netherlands and Switzerland were present. Among others, Gottfried Locher, president of the Federation of Swiss Protestant Churches, provided personal greetings referencing a long-standing friendship with the bishop who is well known and honored in ecumenical circles throughout Switzerland.

The former bishop of the Transylvanian church district, Géza Pap, who has worked with Kató for the past 12 years, gave him three pieces of advice in his greeting. First, he advised him not to get caught up in the stress. He encouraged him to take five minutes to simply be still and listen to God. Secondly, he reminded Kató that the church does not belong to the bishop. It belongs to God. And finally, he said do not be indebted to others, but have a clear mind and a clear heart for the important decisions.

Zoltán Balog, the Hungarian Minster of Human Resources and Reformed pastor said there have been struggles on both sides of the border. He questioned what will hold the Hungarians together in the future – history, money, citizenship? His answer was that spirituality alone can maintain the bond. "We face difficulties publicly and politically – struggles that kill your spirit – but I came to the same conclusion as the bishop, 'however.' We do not have a choice but to continue struggling in spirit and trust." In the end, he encouraged the bishop to see how Transylvania, out of its poverty, can help enrich Hungary.

Kató responded to all of the greetings at the end of the service. To the politicians, he said those who follow Jesus' order to help the poor will have the support of the Reformed Church, no matter which party they belong. He concluded, saying that we always have conflict, but community does not mean the bigger eats the smaller; it means we work together as equal parts.