The voting drama in the Reformed Christian Church in Serbia (RCCS) concerning the election of Béla Halász continues to persist well into 2013. The Voting Committee met again on 28 January, but there was still no official announcement made.
Voting results were tallied on 12 January, but the Church's statement was delayed and no official announcement was made. However, the results became public. The official argument for the delay referred to a 15-day appeal period. The Voting Committee's meeting on 28 January marked the end of this period. After a two-hour, closed meeting, members of the committee presented a report to a crowd of 40 people. "Who has the right to decide on appeals," was the question on everyone's minds.


Four of the six committee members constructed and signed a report that was shared with the people present. István Csete-Szemesi, former bishop of the RCCS and Voting Committee member, did not sign because he was not in attendance. It stated that two appeals were received, but they were sent to the Synod Council and because of this, the Voting Committee was not eligible to announce the final results until the appeals had been handled properly.

One appeal was from András Molnár the Church Legal Counsel and the other from Attila Orosz, Dean of Bacska Presbytery and the RCCS' other bishop candidate. Submissions were sent and addressed to the Synod Council, and according to the members of the committee, there is a Church regulation (48th paragraph) stating that appeals must be sent to the Bishop's Office and addressed to the Synod Council. The Voting Committee stated it was not able to announce the election results. 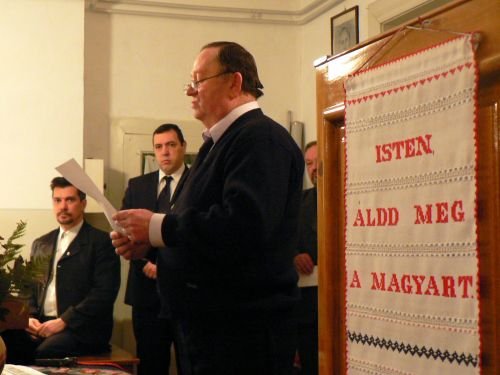 Nándor Kiss, a member of the committee, did not sign the report. He believes the committee should have announced the results because deciding upon appeals is not the responsibility of the Synod Council. He warned that the regulation they quoted was written regarding pastoral vacancies, not appeals concerning Church leadership.

Instead, he says that the task of the voting committee, which was set up at the Synod on 10 November 2012, is regulated by another section of the Church law. The 77th paragraph explains the proper election process for presbytery and the national church officials. From this paragraph, he feels the collection of appeals is the responsibility of the voting committee who received this task from the church governing body. Its task is to organize voting, which should include decisions about appeal submissions.

Kiss then called for a convening of an extraordinary Synod to settle the matter. "I think, following the church regulation, the result that was announced on 12 January should be the final result," he said, "If the Synod Council discusses the appeals, it will meddle in the voting process and work of the voting committee, which will cause legal consequences. I am asking the congregations and elders to stand next to the Church Law, to validate justice and the will of our community."

Béla Halász also urged the meeting of this extraordinary Synod. He said that the Synod should have the right to investigate the cause of this situation. There was a heated debate between the people present and the members of the committee. A number of the people asked the committee to return to a closed meeting and write a report reflecting that the results announced on 12 January were, in fact, the final and official decision.

Imre Hallgató, Lay President of RCCS and member of the Voting Committee, stood behind the report. He said that the mandate of the voting committee expired on the 12 January, and agreed that until the appeals are dealt with, a final result cannot be announced. Attila Orosz echoed this sentiment saying that everyone wants this process completed as soon as possible, but the deadlines and rules must be respected and followed.

The Church legal debate surrounding the election is coupled with the complicated political atmosphere within the Hungarian community in Serbia and by Hungary's interest in the Hungarian minorities living in neighboring countries.