The Assembly of the Királyhágómellék Church District in Romania recently held elections in  Nagyvárad (Oradea), reelecting a Bishop and filling other important positions. The district is a part of the Reformed Church in Romania, a member of the wider Hungarian Reformed Church.

István Csűry was recently re-elected as Bishop in the Királyhágómellék Church District. Out of the 97 participants in the recent Assembly meeting, 84 voted for Csűry. 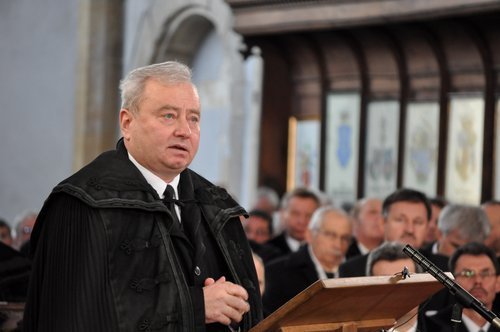 No other candidates ran for the office of Bishop in the district, so István Csűry was the clear choice. The Assembly also elected Lászlót Forró as Vice Bishop and Lajos István Bara as the Lay President. Bara is the Director of the Wesselényi Reformed Collegium in Zilah (Zalau), Romania. István Lukács Dénes, Dean of the Bihar Reformed Presbytery, was elected as the Director General for Mission in the Church District.

The re-elected István Csűry thanked the delegates for their confidence in him, and said that he is willing to fulfill this position for five years, until his retirement.