The Conference of European Churches (CEC) is counting down the days until its General Assembly, which will take place in Budapest on 3-8 July. Member churches will gather in Hungary's capitol to discuss CEC's role, mission and vision in a changing Europe. The Reformed Church in Hungary is honored to be a hosting church for the Assembly and excited to be a part of CEC's discussion as they look to the future.

The group responsible for planning the assembly consists of representatives with project planning experiences, and who are also representative of a variety of geographical areas and denominations. This Assembly Planning Committee (APC) began its charge to organize this event two and a half years ago, when it faced its most immediate challenges, mapping finances and fundraising. Now, its most important task is to establish a programme that allows attending delegations to focus on the future of CEC and work together to make decisions "in a democratic and transparent way." According to Beate Fagerli, an APC member from the Church of Sweden, "To ensure the active participation of member churches in the revision process, APC has chosen to prepare a very full and demanding business programme for the delegates." The APC is also working closely with a Local Planning Committee in Budapest, overseen by a local coordinator from the Ecumenical Council of Churches in Hungary, to iron out all the logistical details of the Assembly. 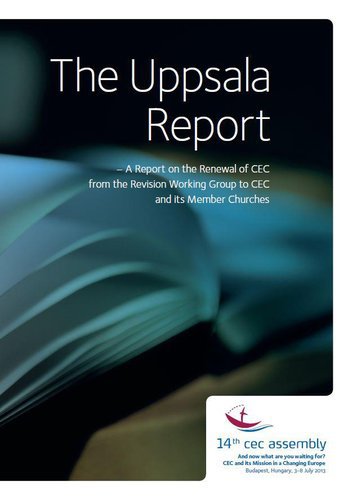 And while revision decisions still need to be made during the Assembly, the process started long ago. Following the 2009 CEC General Assembly in Lyon, a Revision Working Group (RWG) was created to reexamine and develop recommendations for an organization-wide reform. The group, which started working in the autumn of 2009, is made up of 15 people from different churches and denominations. The outcome of the group's task, a report titled The Uppsala Report, came after its 8th meeting, November 2012 in Uppsala, Sweden. According to Anders Lindberg, member of the RWG from the Church of Sweden, CEC had previously taken steps toward renewal, especially following the fall of the Iron Curtain, but none of these steps were completed. Therefore, the RWG's undertaking concerning CEC's vision, mission and strategic goals began "at a basic level." The beginning section of The Uppsala Report contains a statement of faith, historical narrative, vision for CEC and Europe, description of CEC's mission, proposal for core values and a number of strategic goals for the coming years.

Another aim of the group was to observe the current organizational structure and determine its effectiveness. Its findings suggested that a new, simplified structure was necessary. This proposal would see a smaller general assembly and governing board. In addition, the RWG advises that CEC dissolve all of its commissions, while protecting the commissions' work. The hope is to create a clearer system that functions better in a reduced budget framework. The Uppsala Report and its supplemental document, which includes several necessary constitutional changes reflecting the Report's proposals, will be a large part of the discussion in July.

To find out more information about the revision process or the 14th CEC General Assembly in Budapest, visit the Assembly website here.