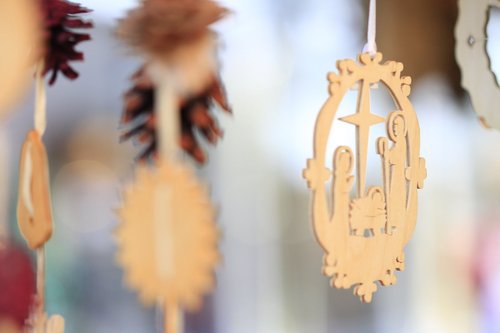 And then it all went wrong. It all fell apart. We drifted apart, far apart.

But then in an old fishing village at the Lake of Gennesaret a carpenter’s son starts talking to John. And at that moment, something new has begun in the life of John.

Later on, when he, through the Holy Spirit, describes the festivity known today as Christmas, forcing it into a cage of written words – the infinite into something finite, the whole into something incomplete – he knows that this is a new creation, a new beginning for him and for everyone who believes and lives what it means that in the beginning was the Word, the Word became flesh and without him nothing was made that has been made.

The new law of the new beginning: the laws of forgiving not seven, but seventy-seven times and of not letting your left hand know what your right hand is doing, which both serve God’s grace; the humility of repentance, the solemn silence of inner rooms, and the resounding confessions of communal worship. And he knows that this law requires not mere stone but the flesh of human hearts; the commandment of love is to be carved into man’s heart, so that we are able to love others as ourselves from the bottom of our hearts, with our fullest intellect and our strongest will.

Something new has begun, a new creation in Him, Jesus Christ, whose glory we ourselves can also witness. Beyond the light of candles, beyond the daily bread of the festive dinner, beyond the glittering eyes of our children, beyond a life full of grace, and even beyond death, which fulfils the reality of eternal life and resurrection.

We can also see this glory during Christmas in 2018, and although it is only a reflection as in a mirror, we can still express our gratitude, sing songs, lay the table and have a feast, exchange gifts and thank the Lord that we have received the ultimate gift in Christ. It is also with and through Him that something new has begun in our lives, culminating in our seeing His glory face to face one day.

Until then, let us hearten our own souls and each other with a hymn:

Crown Him with many crowns,

The Lamb upon His throne

Hark! How the heavenly anthem drowns

All music but its own

Awake, my soul, and sing

Of Him who died for thee

And hail Him as thy matchless king

We all wish you a blessed Christmas.

Presidium of the General Convent of the Hungarian Reformed Church

The Presidium of the General Convent of the Hungarian Reformed Church is the representative and consulting Body of the reformed Churches in the Carpathian Basin. Its members are the acting leaderships (Bishops and Lay Presidents) of all the church districts of the joined Churches. It is mandated to coordinate the cooperation and to promote the unity in worship, church life and witness. The General Convent represents around 2,5 Million members of 7 reformed Churches organized in 11 Church Districts and living in 7 different countries.