An ecumenical delegation composed of representatives from the Commission of the Bishops’ Conferences of the European Union (COMECE) and the Conference of European Churches (CEC) met in Zagreb on Monday, 20 January 2020 with Mr. Andrej Plenković, Prime Minister of Croatia to exchange on the priorities of the Croatian Presidency of the EU Council, which started on 1 January 2020. Péter Szenn, Bishop of the Reformed Christian Calvinist Church in Croatia, was among the participants on the invitation of CEC.

The delegation led by H. Em. Card. Jean-Claude Hollerich SJ, President of COMECE, and Rev. Christian Krieger, President of CEC, shared a contribution of Churches in Europe on key issues that the Croatian Presidency will address in the following six months. The meeting included the participation of representatives of the Croatian Catholic Bishops’ Conference and CEC Member Churches from Croatia.

An open and constructive discussion focused, particularly, on the Future of Europe, and the upcoming related conference initiated by the EU. Churches underlined the importance of the inclusiveness of this process, and expressed their willingness to actively contribute to its success for the benefit of European citizens.

Churches also articulated their support for Croatian Presidency’s efforts towards fostering the integration of countries of South-East Europe into the European Union. 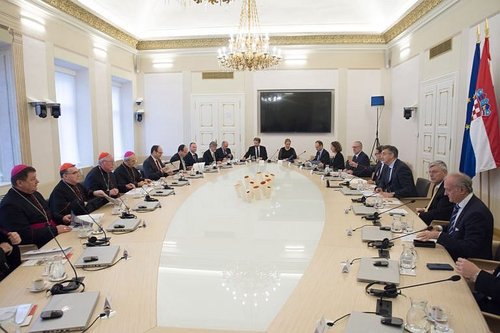 Moreover, the delegation exchanged views with Prime Minister Andrej Plenković –  accompanied by the President of the Croatian Parliament and several members of his government, including the Minister of Interior, Minister of Culture, and the State Secretary of Ministry of Foreign Affairs – on Churches’ engagement in a number of areas related to the priorities of the Croatian Presidency, including migration and refugee policies.

The President of COMECE referred to Churches’ concerns on existing divisions in Europe. He underlined the important mediating role of Croatia, stating that “dialogue and mutual respect are crucial values that need to be upheld in order to overcome divisions”.

COMECE and CEC welcomed the commitment of the Croatian Presidency of the EU Council to foster community-building through sport, culture and education. In this regard, the President of CEC also pointed out that “inter-religious and inter-cultural dialogue have important role in promoting social harmony and a spirit of encounter in Europe and beyond”.

The participants of the meeting stressed that supporting persons, families and communities facing digitalisation and demographic challenges in Europe is key to reinvigorate citizens’ trust in the EU.

Churches also encouraged the Croatian EU Presidency to work towards a just transition on the basis of the recently proposed European Green Deal, as well as to promote the fundamental right to religious freedom in Europe and worldwide.

Meetings with respective EU Council Presidencies are part of a long-standing tradition supported by Article 17 of the Treaty on the Functioning of the EU (TFEU), which foresees an open, transparent and regular dialogue between the EU institutions and Churches.

In the context of the Week of Prayer for Christian Unity, the COMECE-CEC delegation, together with local Christian communities, participated in an ecumenical celebration led by H. Em. Card. Josip Bozanić at the Cathedral of Zagreb.