In the primary school of Véménd, there are two groups of mostly Roma children, supported by HEKS (Swiss Interchurch Aid) for more than a year, where there has been an exemplary gifted children’s program for a long time. The teachers of the school in Baranya County not only devote their hard work to academics and art competitions, but also thanks to their work, there are no tensions between Roma, Swabian and Hungarian families. 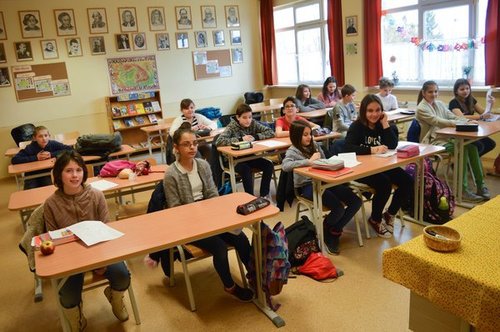 Silence surrounds the three-story building of the school. As we approach the door next to the signboard in Hungarian and German, we would think that there is summer break, but immediately refute the idea as March’s cold wind urges us to button our jackets and we see overhead soot-grey clouds. Just in the middle of lessons, I meet with the Director of the school, Anita Jakabné Galambos, and Deputy Director, Dénes Baracs, who, along with their colleagues, consider the pedagogical career as a vocation in the strictest sense of the word, something that the kids have also noticed which may be the reason behind the silence in the classrooms.

According to the latest data, despite the fact that this area in the town is inhabited by 1 341 people and the number of students from all four villages at the school is hardly more than 110, cultural life flourishes in the building. A good example of this is the rhyming project of Baracs and Krisztina Falusi, which has been running for more than three years, and the results speak for themselves. There is often a weekend program where enthusiastic students are invited to participate, for example in the near future there will be a national competition held in Szekszárd, and a conference will open in Pécs.

Véménd is not much different than an average Hungarian village: there are very few job opportunities, and even fewer young people year-to-year. However its history significantly determines its present appearance. In 1945, after the Second World War, the Swabian community in the largest part of the settlement was sent back to Germany, and their presence in Véménd was replaced by the Székelys. Some of the former inhabitants returned to Véménd and bought back their houses; their return led to a tug of war between the people, poisoning the lives of the local people for decades.

Of course, the question is how do people live today?

Twenty years ago, there was a cheese factory and two textile factories, however, today all are closed. There is practically nothing, it is just one of those places, which the municipality can ensure. Of course, big farmers live here, but they can only employ one or two people. However, this is not true just Véménd, this is also true for the entire Hungarian countryside.

The Deputy Director is very sad to see the situation in the Hungarian countryside. When he got here, there were two classes, each with 20 students, in a single grade, but now there is only one class in each grade, some of them with only 11 students. “These villages did not die out. There is a group of people from the city who bought buildings in bad condition in hopes that they can live there, but they cannot. That is why there are children coming from neighboring towns with whom we have lot of problems - this is not a way out for the Hungarian countryside,” he said. He added that the change in the ratios had a very positive result, as more and more talented Roma children came to the institution.

Baracs continued, “As there is no Swabian class to compete with, more attention is given to the Roma children. We are happy to have children with whom we can work with. No matter whether they are talented in history, language, or poetry, we are clinging to them like a thistle to motivate them!”

Thanks to this, the students at the primary school of Véménd go from competition to competition without consideration of whether they are Roma, Hungarian or Swabian. In the institution, every nationality has a chance to live their traditions, and we celebrate the bigger holidays together.  It is no secret that in certain parts of the country, parents are taking their children out of school if the school becomes too “diverse.” In Véménd, Roma make up 30%, but this does not cause a problem, even for a moment.

“The children feel good here, and the parents do not want to take them out of school. In fact, more and more people from other villages are coming here. For a long time they were asked, ‘Are you taking your children to be around Roma children?’ For us it is natural that we enroll everyone who applies to our institution,” said Baracs.

The unifying effect of the school is shown through the participation of the locals in each other's programs: the school building also functions as a community center, where a variety of programs take place.

But the school is open not only for cultural events, for example, while the sixth grade boys play football and the girls play handball, cardboard boxes filled with clothes sit behind the goal, waiting for interested customers too.

While we are walking through the school we look into the classrooms: there are messages on the door written by the students to themselves, and the messages on the wall are the thoughts of the children on what they find valuable in themselves and in their classmates. This was a part of the Happy School Program: we believe that it is important for the students to see the positive in everything, and in that way they can grow to be healthy adults. 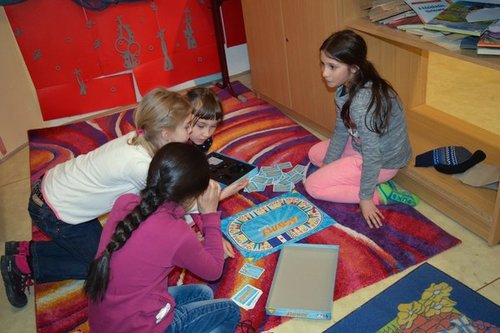 Also part of the program is conversation corners in the classrooms. “Here we talk about how our day was!” “And about what holidays are coming up!” – said the kids. In one of the classrooms, the students celebrate their 100th mathematics lesson by playing board games. When the students are not sitting in the classroom, they visit the school library that is also open to people in the village. “On a Saturday morning at 7:45AM, one of them was standing in front of the building,” tells the librarian lady, who opens the reading room for one hour on Saturdays for those who are interested.

Dénes Baracs, in addition to being the deputy director, teaches and helps students to prepare for competitions. He also works at the HEKS afterschool program started by the local Reformed pastor, Rev. Ildikó Szabó. Congregation members also volunteer at the afterschool program, and Baracs believes that every minute they spend with the children is important for their development and improvement in school. “I get them after a long school day, and those who come here have serious learning and behavior problems, but I have no issues with them,” figured Baracs.

As we learned, the biggest problem is that reading and writing is challenging for many of the students, but they are always excited if they can do something on the computer. Baracs said, “The fact that we do not write in an exercise book but in a Word program is especially motivating them because the program automatically underlines when they have made a mistake.”

But reading comprehension is another thing, for some it can take an hour to read a text, and he/she cannot remember any of what they have just read.  “These are the little, every day struggles, and in the afterschool program we take baby steps. These children spend their time in peace, and it is important to these children to know that they are being cared for. They love coming here knowing that after they work hard, they can play after,” stated the Deputy Director.

There is a special Roma family in Véménd. “I want to mention them as an example in front of non-Roma people. When they come home from working in the forest, and when the children come home from school, they sit together and play music. In their family, this is a regular evening program, while in our families, our children are sitting in front of the computer in another room,” continued Baracs.

Our visit came to an end. These stories seem unique at first sight, but if we think about it, it would not take so much effort to implement these examples elsewhere. Even if the situation in the countryside is concerning, many times the work of God becomes tangible in the places where the situation seems to be the most hopeless.

Based on article by Attila Dezső