Debrecen Reformed Theological University presented Rev. Dr. Jooseop Keum with an honorary doctorate for his ecumenical engagement in shaping the Reformed and ecumenical theological thinking of our time.

“I am truly honored and humbled to accept this Honorary Doctorate from the Debrecen Reformed Theological University. Indeed, it is my privilege to be invited here, the Great Church, the historic center of Reformation today to gratefully receive an honorary doctorate from this venerable institution of Reformed theological education,” began Rev. Keum in his acceptance speech. 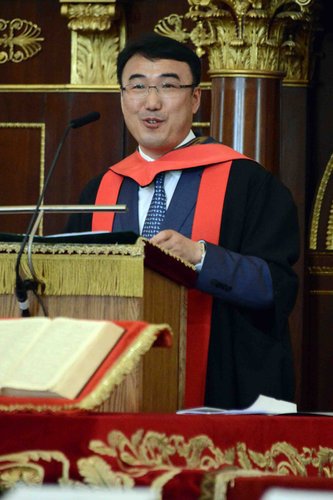 “Rev. Keum is an outstanding contemporary Korean Reformed theologian, who, through his ministry in the ecumenical movement, has been influential in shaping the Reformed and ecumenical theological thinking of our time,” said Rev. Károly Fekete, Bishop of the Transtibiscan Church District when introducing the laureate.

As an ordained minister of the Presbyterian Church Korea (PCK), Rev. Keum served as the general secretary of the National Youth Association of PCK, and soon after, became the PCK ecumenical officer. Based in London, UK, Rev. Keum was the executive secretary for the Mission Program of the Council for World Mission (CWM). In 2007, he began his service as the program executive, and in 2010 became the director of the Commission on World Mission and Evangelism (CWME) of the World Council of Churches based in Geneva, Switzerland. Additionally, Rev. Keum began building relationships with Hungarian Reformed theologians from Hungary, as well as those from Transylvania (Romania), during his studies in Edinburgh, UK, and has been an active participant in Hungarian-Korean theological dialogue since then. Rev. Keum serves as one of the initiators and co-chairs of the Hungarian-Korean Reformed Theological Forum. Currently, he is a professor at the Presbyterian University and Theological Seminary (PUTS) in Seoul, South Korea. 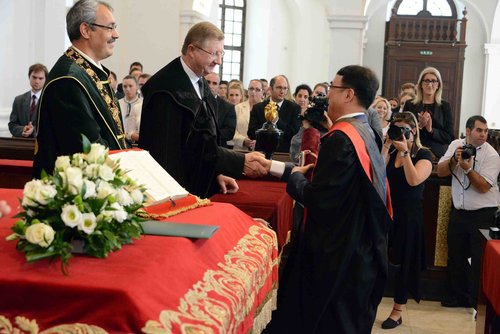 When accepting the honorary doctorate, Rev. Keum shared words of gratitude and of mission, “The incarnation of Jesus took place among people at the margins. […] God chose to inaugurate His Kingdom in the margins [of society]. God was and is encountered, not only among the privileged and powerful, but also among the powerless and in unexpected locations. Therefore, no one can understand the Good News of Jesus Christ without incarnating it in the context of those in the margins. Discussing mission only in a meeting room or at an ecumenical table is never enough.” He continued, “The way of Jesus is the only way to empower the church, mission, and ecumenical movement. We work with the empowerment of the Holy Spirit and rely on God and people, rather than institutional support and protection. Although we do not have “gold and silver,” we have joy and commitment to the Gospel and passion for justice. I believe that bringing this dynamic force to the heart of ecumenical mission thinking and action is the first step to rejuvenating our movement.” He concluded by inviting students and staff to reflect on ways to understand and express the power of God’s love in order to “defeat the culture of hatred and the politics of fear.” 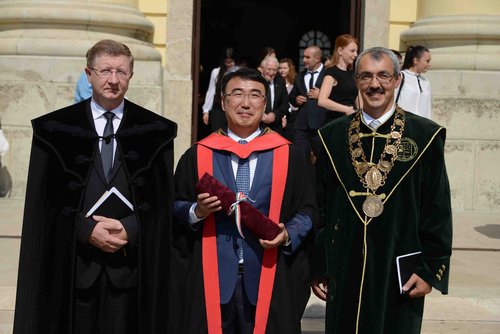 Debrecen Reformed Theological University and its Senate presented the Honorary Doctorate in recognition of Rev. Keum’s service in cooperation with the Christian churches all around the world. The Reformed Church in Hungary and PCK are long-time partners at the national, church district, and university-level. This partnership is also evident in the sisterhood of PUTS and Debrecen Reformed Theological University for many years, and was further strengthened this summer with the launch of a student exchange program. 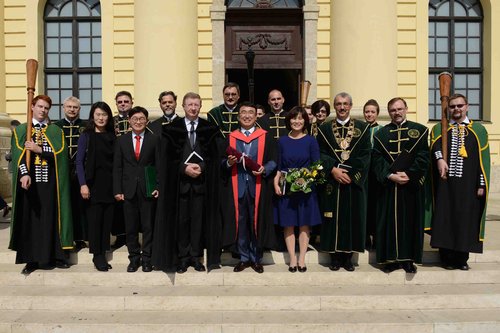