A book of Reformed doctrines accidentally caught in the hands of Mihai Androne completely changed his life. We spoke with the professor from the Theological Academy of Cluj-Napoca about the jubilee for the 450th anniversary of the Heidelberg Catechism and what Protestantism means for him.

How did you come to Calvin?

I was in my final year at the Orthodox Theological Academy of Bucharest in 1999. The previous year Timothy George, a Baptist theologian, published a book that was about the Reformed doctrines. The new Protestants of Oradea translated the book, and as a result of an absurd story just started to sell it in the building of the Orthodox Academy. This proved to be a fatal mistake, I not only bought the book, but I read it. I was deeply surprised, because everything I read was absolutely different what the professors taught about the Reformed theology. I began to delve into the topic better myself, and in an unguarded moment, I asked one of my teachers an uncomfortable question.  The response was the following:  “How do you afford something like that? Please!” I’m a level-headed man, so I asked more, but something inside me began to break.  A year later I won a three-month research fellowship at Geneva by the Swiss professor, Martin Hauser. I went as an Orthodox and I came back as a Reformed.  Because the first book that I borrowed from the library was Calvin’s Institutio.

It could not have been easy to read. What was your first encounter like with Calvin?

Shocking. I graduated as an Orthodox theologian and I lived with the conscience that I possessed the truth. After I read this work, it was uncomfortable for me. I realized I wasn’t on a good path, on the contrary, I had gone the wrong way.

In Transylvania the reformed religion is the "Religion of Hungarians." We feel Calvin’s doctrine is our own. Many people in the village think that Calvin was Hungarian. How do you feel in
this ninety-nine percent Hungarian community? 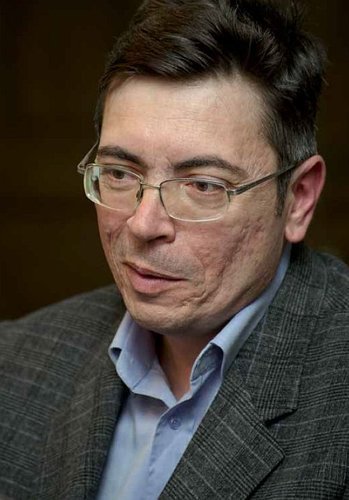 As a Romanian reformed, I began to feel what it’s like to be in a minority. In one day everything changed; I went from the majority to the minority. Strange situation: Romanians are my brothers ethnically, but from a religious point of view I’m closer to the Hungarians.

I think your attitude of tolerance is different.

Of course.  If every intolerant person would be in my situation, they would behave differently over time.

What happened after your return from Switzerland?

The first thing I did was find out if there was a Calvinist congregation at Galati, although I was convinced that I was looking for the impossible.  Amazingly, I found a small parish in the city. I went to the first worship service immediately. It was in early February 2001 when I walked into the courtyard of the parish and signed up with Rev. Imre Nagy. He was surprised, but I insistent because I was looking for a community where I could feel at home. I was lovingly adopted and went to church on Sundays, although I understood almost nothing of what happened there. I heard the words of God and Jesus Christ, and they meant a lot to me.

How did you get to the pulpit?

I went to church diligently for five years, but I was a member of the church without responsibility. Then the pastor said:  you’ve been in a trial period for five years. It would be great if you got confirmed. I agreed. Meanwhile, I wrote my doctoral dissertation on the philosophy of Calvin at the University of Ias, translated the Heidelberg Catechism into Romanian and at the end of 2005 I was also confirmed. Then the pastor asked if I wanted to preach when he was not in the congregation. Of course I accepted, although it meant an entirely new thing, and not just for me but the congregation also. Now I have led worship once a month for seven years:  the sermon is in Romanian, the liturgy is in Hungarian.

You became confirmed as an adult. How did the Catechism seem to you?

The pastor was strict, it was not easy.  I also had to learn the questions and answers by heart – fortunately not all of them. Of course, as an adult with a theological background, I saw things in a different light. The Catechism is very kind to me, because I translated it into Romanian from the English, German and French texts. I would like to thank the support of Professor Tamas Juhasz, who drew my attention to more things, which was a great help in the translation. The Heidelberg Catechism first attracted me with its purity: we understand Christian doctrine from the Catechism and not from a two thousand page dogmatic discourse. This is a document of faith in which the focus is not on the diversity of non-Christian religions.  If you want to deepen in faith, I suggest reading the Catechism, whatever religion you are.

What does it mean to be a Protestant?

To be a reformed believer means to be faithful to the teaching of the scripture. The reformed believe in Jesus Christ and that the Bible alone holds the source of Christian teaching, but there are some books that will help you navigate through our religion. We must read authors who are taught to navigate the scripture on a daily basis, like Luther or Calvin. 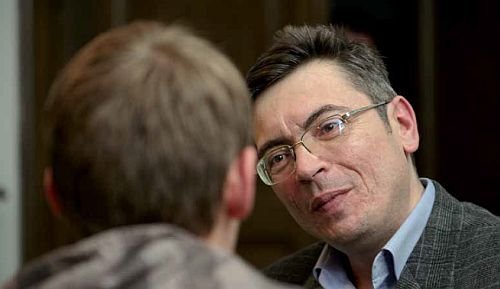 How did your life and your relationship to God change after your stay in Switzerland?

As a reformed person you are much closer to the Bible, which you can read for example when you are sitting on the train. You insist on the true Protestant traditions, but not the liberal line, which dominates western society now. I would describe myself as someone who follows the teachings of the scripture and pray that it can be applied in everyday life. However, I read the works of the great reformers because they do not fall away from the message of the gospel.

Do you know anyone else in your situation where you are?

Yes, one of my acquaintances, a manager of a private company in the capital, recently became a member of the reformed congregation in Bucharest.  As I know he would also like to pursue theological studies. So there are Romanians – I hope more and more – who wish to broaden their horizons to approach things differently on a spiritual level as well.

Have you ever considered forming a Romanian reformed congregation?

Yes, but I ask myself whether God has called me to this task or not.  Therefore, in this matter I am not sure.

How did the Orthodox Church respond to your step?

I do not know, because all connection was lost between us.  There are some people, acquaintances, whom I say hello to and sometimes talk with, but there is no formal connection between us on any level.

You are studying in the master’s program of the Theological Academy of Cluj-Napoca. What are your plans?

Among the long-term plans there is a doctorate in the Calvinist doctrine in Switzerland. I absolutely love dealing with reformed theology and I want to continue this path in the future.  I’m impressed by Calvin’s personality. I think he represents not only the past, but he’s a thinker whose doctrine and ideology is still relevant.

On 28 June 2013, the Reformed Church in Hungary held a festive Synod in Debrecen celebrating the 450th anniversary of the publication of the Heidelberg Catechism and the five-language special edition, which states in its recommendation: “For centuries, the Catechism has helped successive generations and the congregations which are geographically distant from each other – Hungarian or other native speakers – express the truths of the reformed Christian faith of the Church with unified terms. Taking this into account, the decision was made to prepare and publish the Heidelberg Catechism in the mother languages of the reformed in the Carpathian Basin. The Romanian and Slovakian translations were made in 2013, which in addition to German and English versions of the Catechism are now with the new Hungarian translation in this special deluxe edition. May this publication serve for peace between the reformed faith and the strengthening of our people!”

In this volume the Romanian version of the Catechism that can be read is translated by Mihai Androne.