László Gonda Ph.D. is an associate professor for Mission Studies at the Debrecen Theological University. He holds a PHD from the University in Utrecht with his field of research in the theology of Christian mission and international church relations. He also serves as the Deputy Head of the Planning Department, Ministry for Foreign Affairs in Hungary. He is married and the father of four children. 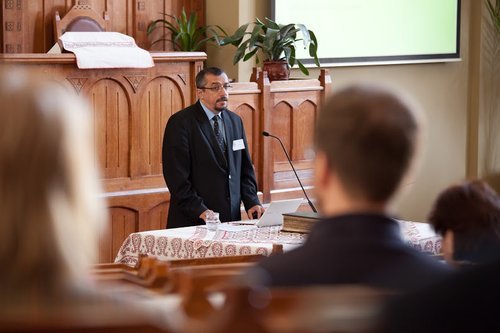 How did the commission go about writing this statement?

The last commission did a very important job in preparing this process, but they somehow didn't arrive to a conclusion. When this new commission came into office (2006), we set three priorities. One of them was mission and ecclesiology, so the question of church in mission. The other was evangelism, and the third was the question of spirituality. Actually, we didn't decide to have a new mission statement at that time, but we thought we would embark upon a journey together and we'll see whether it will develop into a mission statement. There were two important milestones inspiring this process. One of these was in 2010. That was the Edinburgh centennial celebration, the 100th anniversary of the first world missionary conference, which was held back in 1910. We had been very much inspired by working together with different partners in preparing discussion papers for Edinburgh 2010. Practically as we look back now, this process of preparing these topical discussion papers, they became the nucleus around which the mission statement developed.

There is also a Hungarian reference here. As a preparation of the Edinburgh process, we had an important meeting here in Hungary in 2009 and it played an important role in the development of the mission statement later. And that was on mission and ecclesiology. That was a historic moment because there was a working group of faith and order on ecclesiology, and us, the commission of world mission and evangelism and we decided to have a joint meeting. Practically that conference was the first preparatory meeting to formulate the section on mission and church. The results of the meeting were fed into Edinburgh and out of this huge celebration we continued working on these different topics, and out of this came the statement.

There were two other milestones. That was 2011, Ghana, when we remembered the integration of the International Missionary Council and the WCC in 1961. In 1961 the two councils merged and that was important because it also had ecclesiological consequences. It became very important that church and mission belong together; these are not two different entities but authentic mission needs to be rooted in the everyday life of the church. And also it should inspire the way that the church moves.

There was a very important third milestone. In 2012 we had a pre-assembly mission event in Manila, Philippines where we already had a first draft of our statement. Actually we invited 220 people – people from all over the world, all kinds of constituencies, not just WCC members. We had a week-long meeting in order to discuss and reflect on the first draft of the statement. Methodologically that was very important. It was for us very important that we don't think that we 25 commissioners are entitled to teach a lesson to the world church. In Manila we asked people – the churches – and it was not only church leaders or high ranking officials or theologians, but we tried to be very representative. And from chapter to chapter we went through the whole text. All then all the inputs and feedback were gathered and a drafting committee re-drafted the statement on the basis of these reflections.

How do you think it will be realized in the world church and local congregations?

There are all kinds of plans to use very creative methods of applying it to a local congregation, so to make it consumable to the local congregations. There is already a study guide in place, which is a kind of complementary material. It's more cognitive, but it is very helpful material for churches to use. But there are some ideas to have other kinds of materials, liturgies for example and also some materials more concentrated on different age groups. But, it is also important, of course, to have the text accessible in as many languages as possible.

There are three things how to impact the local churches. The one thing is directly, so we invite the local churches to have a look at this text and try to think about what this text says. It was also was not intended to be an academic text. The idea was to address the issues in an everyday language – high quality, but not in an abstract way.

The other is that we hope the issues that are raised by the text will be reflected in all kinds of theological trainings in the world church – seminaries, theological schools, mission training centers, mission preparatory courses and education for future pastors. We do hope that this will shape the mindset of the future leaders of the church – local leaders and other level leaders – and in this sense it will have a lasting impact.

The third is that the topics in the text, they are also quite thought provoking. I think that not the text itself but some the thoughts will be provoking discourse, discussions, dialogues. I very strongly believe that it will not be just another document.

What does it mean that you, or you as a representative of the RCH, were involved in this process?

Of course it was for me, personally, a fantastic experience. It was experiencing the reality of the ecumenical movement, a journey together with these very different people, the spirituality which was very inclusive, very accepting, very tender. I was very much enriched and inspired by this.

But, I think it is important to have a central European voice in the international ecumenical discourse, and it was a privilege for me to be that voice, and I tried to be that voice. There are two parts to this. One is that just to be normally a part of the process, and I say that intentionally because sometimes we experience that we Central Europeans are looked upon in international meetings sometimes as some exotic newcomers – coming from behind the Iron Curtain some people still think. We are put in a niche. And my intention was not to do this.

Practically I was trying just to be a normal part of the process – to share my views and the views shared, hopefully, by my church. I tried to be the voice of our context. I wouldn't say that I could always represent the Hungarian Reformed position, but also I tried to not only be aware of the Hungarian Reformed but also the other Hungarian churches as well, being the only central European representative, and also to think of the wider central European context. We have a special experience here in Europe, which is different than Western Europe, than Africa, Asia, Middle East or North America. I tried to find the places where we have a different experience or conviction or approach and I tried to voice it.

Now that this statement has been approved and presented at the General Assembly, what are the next steps that need to be taken?

The next step is to apply it, to use it, to disseminate it, to bring it into the flow of thoughts in the churches; the theological education in the local churches. I think that is the most important task to do. There are lots of issues to this task. The next commission will have lots of issues to address. And also the questions which are raised by the statement but are not a finished story, like mission from the margins, which is one of the strong characteristics of the statement and a novelty in this statement. It is something we need to learn a lot and speak a lot about – what does it practically mean? Also, the whole question of evangelism and ecumenical evangelism in relation to the question of proselytism. And there are issues like the whole concept of life which is in the center of this mission statement. The whole question of what does it mean to have this inclusive, transformative spirituality as you read it in the text. That is something that needs to be developed also in dialogue with other religions. I think the next commission needs to pay attention to the issue of interreligious dialogue.

My strong conviction out of this experience is that the ecumenical movement has a future. It is an important and strong part of Christianity to the contrary to other pessimistic views. I personally experienced many aspects of this and I would encourage everyone to take the ecumenical movement seriously and look at it in-depth because there are very important treasures, sources of spiritual inspiration, to be found there. That's my advice to everyone, and to myself.