Dr. István Szabó, Presiding Bishop of the RCH and Bishop of the Danubian Church District, spent the last week of September in South Korea visiting with partner churches in the region and attending their Synod meetings. 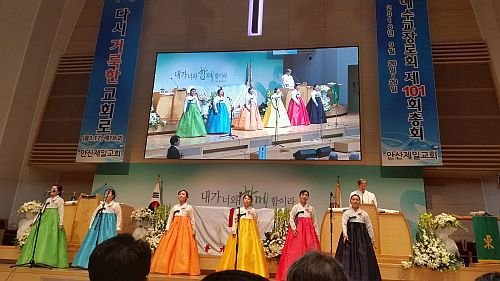 Chae Hwa Jeong has been in Hungary serving as a mission coworker with the RCH since 2003. He also serves as a pastor in the Budapest Korean Presbyterian Church, which is the official Korean-speaking congregation of RCH. Rev. Kim Seon Koo teaches at the Institute for East Asian Languages in the areas of Korean language and Korean church history at the RCH’s Károli Gáspár University. He also supports and participates in Roma ministry. The two mission coworkers were pleased to be able to show Bishop Szabó around during his time in their native country and aid in the local programming for his visit.

During his sermon at the Ecumenical Worship of the PCK GA, Bishop Szabó reflected on the historical similarities between Hungary and South Korea, saying that the historical paradigm of the Hungarians is, “similar in many respects to what the people of Korea have also experienced in the last centuries.” He continued, saying that, “We know that those who can have faith are tougher, stronger, they always have a prospect even in tragic life situations. And the other way round: where there is no faith, there life is darker, harder and there is less hope. Paul the Apostle does not speak about faith in general, but in specifics … Faith is confidence and hope in God.”

Bishop Szabó had a busy schedule during his time in South Korea, visiting the synod meetings for the PCK and the PROK, as well as meeting with various church affiliated groups. At the Synod of the PROK, Bishop Szabó expressed greetings and a message of solidarity on behalf of the European Reformed churches.

Not only did Bishop Szabó attend synod meetings, but he also met with groups such as the National Organization of the Korean Presbyterian Women and the Kyung Buk Synod, a part of the PROK which has a partnership with the Danubian Reformed Church District of which Dr. Szabó is the Bishop. He also visited the Hanshin University Campus, which has a strong partnership with the RCH’s Károli Gáspár University, and met with church leadership from both denominations.

During his sermon at the Lord Church in Seoul, Bishop Szabó reiterated the strong connections between the Korean churches and the RCH, saying that, “Although our culture, our language and our customs are different, we can be sisters and brothers because by Christ our lives face in the same direction: towards God. This is why Paul the Apostle wrote so boldly to an unknown congregation a long time ago, this is why he wanted to meet them, and this is why it is so nice for us to meet today: to be edified by each other’s faith.”

While in South Korea, Bishop Szabó also had the opportunity to give a lecture about program priorities in the RCH as well as participate in an ecumenical partnership workshop that discussed ways to strengthen partnerships. 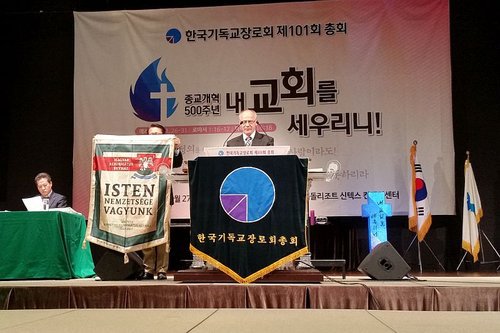 First of all, let me greet you all and thank you for the invitation and the great chance to participate at your Assembly. When I was preparing my visit, I thought and pondered a lot about gifts that I should bring with me. At the end I decided to bring a small flag and convey in this form the greetings and blessings of the Hungarian Reformed people. The images and inscriptions of this flag actually include everything that we would like to tell and share about us with you.

Let me first explain the meaning of the inscriptions. The first one says “Hungarian Reformed Church”, without the reference to an actual country (Hungary), cause this flag is the symbol of the community which was re-established and re-constituted some years ago. As you might know, members of the Hungarian reformed community live nowadays in several different countries of the region called “Carpathian Basin”. After the first World War large parts of the territory of Hungary were divided and attached to neighbouring countries, which affected the connection within the community badly. But, by God’s grace, in 2009 we were given the chance to re-unite. The reunification is the gift of God. Thus, today, I bring you greetings not only from Hungary, but on behalf of Hungarian reformed sisters and brothers living in countries like Romania, Slovakia, Ukraine, Serbia and Croatia.

The second inscription says in English: “We are God’s people” – this is a message from the Bible, a confession of the fact that we consider ourselves a community bound together by God’s love, Christ’s gospel and the fellowship of the Holy Spirit. God has granted us the mystery of salvation, and we follow Christ together, because he is our future.

The third inscription contains a number: 450. This figure refers to the year 1567 when 450 years ago our ancestors received and approved the Second Helvetic Confession, the articulation of the Reformed Christian faith which our church life is based upon and which offers itself as the basis for the community and fellowship we have with reformed communities of other nations around the globe. 450 years that has not been easy. Our life was threatened by wars, persecution, distress and misery – but our life has been kept and saved by God’s grace throughout the history. So that these 450 years are not a burden, but dear legacy and God’s gift.

And last, you can see an image on this flag. It depicts a pelican feeding its nestlings, the baby pelicans, with its own blood. This is a fine symbol of the Church. This mysterious bird represents all those who bring sacrifice for their children. This image refers to the self-sacrificing love of Jesus Christ and to the true vocation of Church at the same time. We should no longer live for ourselves, but for those who have been entrusted to us by God. Paul encourages us in the letter to the Philippians that we have the same mindset as Christ Jesus (Phil. 2,5), who became flesh for us, gave his life for us as a sacrifice, and was resurrected and exalted by God to the highest place, to His glory. Christ is the greatest gift of God – God gave Himself for us in Him (Christ).

In this sense, let me again express my gratitude for that I can be with you here and learn together with you to what we are obliged and called by this wonderful grace of God: gratitude, praise of God, sanctity of life, proclamation of the truth and true fraternal love."