The Fact-finding Historian Committee (TTB) is about to finish its assignment. István Szabadi, secretary of the committee and director of the Transtibiscan Reformed Church District’s archive gave an account of its results during the April Synod session.

We had to wait years for the report. What took so long?

Although the committee was already established in 2010, it took another year to set up the group of researchers. Their task was to collect the materials scattered in the state archives for the church history research, to save like a decade of work for the people dealing with this topic. If we put it this way, a few years were not so much.

How long does the TTB have this mandate?

When we set up the committee, we did not discuss the mandate, only the assignment. Since we have finished most of that, our work should be done by the end of the Synod cycle, by the end of this year. 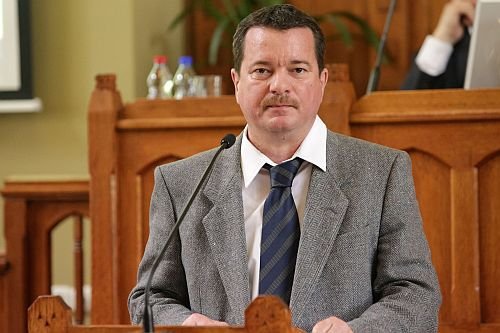 Can we hear names by the end of the year, then? Many people would be interested in the III/III department informers (Communist secret service).

Fact-finding does not only deal with the informers, since that is only one aspect of a complicated story. In order to get to know the Reformed Church’s history after 1948, the documents of the State Office of Church Affairs turned out to be more useful than the informers’ reports kept in the Historical Archive of State Security Services, because through them we can understand better the ways of running a party-state Church. That was the main goal of the TTB’s work on the first place. During collecting data of course the list of the informers came together as well, but while processing, we experienced that everyone’s case was different. If somebody had to write a report, this fact alone does not label that person because he could have been a victim as well. I read documents in which the officer wrote that his recruiter is useless because he could not understand his task. A failed attempt at enlistment like that can be a positive example for the Church of today. We could make case studies, but issuing lists is not only professionally pointless but ethically questionable as well.

Who can use the systematized and standardized database in the Synod Archive later?

We will have to wait a little with the research regulations. What we already know is that the agent profiles – due to their diversity- will be analysed by an independent committee.

What can visitors read on the webpage mentioned in the committee’s report?

We plan to publish the bibliography and databanks. One of them will handle the story of pastors who suffered discrimination. On the tabloid level it is always about the informers, but no one talks about the fact that among the pastors there were not only informers but confessors and martyrs as well. We also succeeded in identifying the officers running the informer network; there will be a database on them. We would also like to upload such inside materials used by the III/III department, which clearly show that controlling and ruining the Church happened according to a reasoned pattern rooted in the Soviet concepts at that time.

István Szabadi completed his studies in 1989 in the History-Latin faculty with a Latin philological specialisation at the Kossuth Lajos University. As the scholar of the MTA (Hungarian Academy of Sciences) he worked at the classical philology faculty of the university and later he became the archivist of the Reformed Collegium’s Library. In 1996 he attained the archivist certification and in the same year was promoted to the director of the Transtibiscan Reformed Church District’s Archive. The sate recognized his work last year with the Gyula Pauler award.