Focus on Pilgrimage of Justice and Peace. From 26 to 29 of May the General Secretaries of the National Councils of Churches in Europe will meet in Berlin and discuss the relationship between church and state as well as the situation of persecuted Christians.

From 26 to 29 of May the General Secretaries of the National Councils of Churches in Europe will meet in Berlin. Apart from the “Pilgrimage of Justice and Peace”, proclaimed by the World Council of Churches (WCC), the 25 participants from 15 nations will visit the German Bundestag and discuss the relationship between church and state as well as the situation of persecuted Christians.

From Norway to Italy, from Portugal to Poland, the General Secretaries of the National Councils of Churches of 15 European countries will come to Berlin for their annual meeting. They  will reflect on concrete steps for the “Pilgrimage of Justice and Peace”. The look forward to discussing  how European churches can cooperate on issues like life-affirming economies, the protection of creation, nonviolent peace-building and reconciliation and the protection of human dignity.

The General Secretaries will discuss the relationship between church and state in Europe with members of the German Bundestag and the office of the representative of the Evangelical Church in Germany to the Federal Republic of Germany. They will also gather information about measures are taken by European governments to protect persecuted and oppressed Christians and religious minorities. 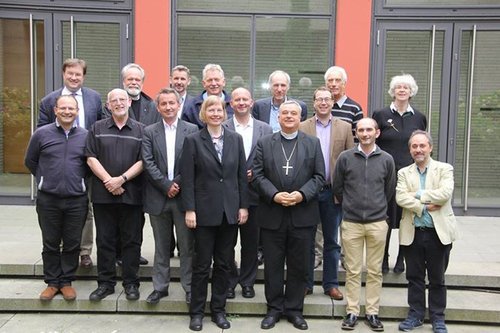 In many countries of the world organisations have been created to provide a reliable basis for multilateral cooperation among churches. They are usually called national or ecumenical councils.

The national councils of churches in Europe stay in continuous contact through these annual meetings held at the different locations of their General Secretaries. They focus on the sharing of experiences and on working together on a topic important to all.

In 2014 the meeting took place in the Netherlands and focussed on the global financial crisis. Representatives of the WCC and the Conference of European Churches (CEC), including CEC General Secretary Guy Liagre will also take part in the meeting.

Dr. Vilmos Fischl, Lutheran pastor, General Secretary of the Ecumenical Council of Churches in Hungary (ECCH) attended the meeting and gave an in-depth report about the manifold work the ECCH coordinates to deepen the cooperation and community of the 11 member churches and 22 church related organisations which hold an observer status. President of ECCH is József Steinbach, Bishop of the Reformed Church in Hungary.

Feel encouraged to read the summary of the report given by Dr. Vilmos Fischl during the Conference on the work in the Ecumenical Council of Churches in Hungary and its committees in 2014.