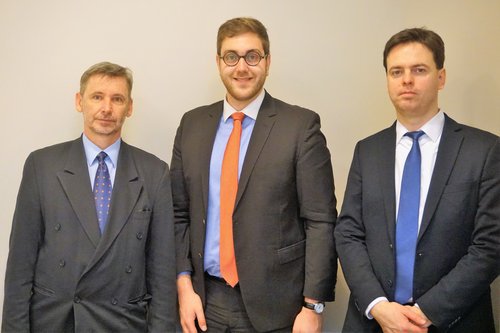 In their meeting with the CEC Study Secretary Rev. Dr Peter Pavlovic, they introduced Hungary Helps project, aimed at providing development assistance to the persecuted Christians and troubled communities in war-torn areas around the world.

In its work, CEC is also deeply engaged in promoting human right, and in particular fundamental right of religious freedom or belief, through various programmes.

It was discussed how partnerships between churches and government agencies can be further strengthened.

The participants were introduced to CEC’s upcoming 2018 Novi Sad Assembly that will be held in Serbia, from 31 May to 6 June, addressing the theme “You shall be my witness”. CEC’s consultation process Future of Europe, an important component of the Assembly, was also discussed and how it is highlighting the voices of churches in engaging with the European Union and the EU institutions.

"In the pursuit for more cooperation and unity in Europe we are not only confronted with challenges of our time, but also challenged by the differences which are there between North and South, West and East. Citizens of post-communist countries have different experiences and expectations about democracy, rule of law and globalisation than those who never lived under Soviet rule. In these countries churches survived in and through isolation, as sort of “islands”, and now they are facing the challenge that overcoming old patterns of isolation and engaging in trustful exchange with others and partnership is not a smooth process. In this regard, the question is not only how to integrate post-communist countries economically and regarding the infrastructure, or what the average speed of the two-speed Europe would be. The real issue is whether and how Western and Eastern European countries can foster mutual understanding and successful communication. It is our conviction that churches, based on their shared theological heritage and tradition, common spiritual and historical experiences, can play an important role in this dialogue, both as it regards the critical, sincere assessment that honours contextual realities, and the vision for the common future. Instead of an emotional and moralizing attitude an objective approach is required, and it is crucial to engage in analysing the actual situation honestly and professionally." - highlight Hungarian churches the importance of dialogue and the role of the upcoming Assembly of CEC in the official response of the Ecumenical Council of Churches in Hungary to CEC's open letter about the future of Europe.