In light of International Romani Day, Reformed Roma communities in the Carpathian Basin gathered to worship and pray for one another. This year, reconciliation is the focus of the event.

Káposztásmegyer became a real concept in the Roma mission. Every year in April, in association with International Romani Day, in the church of Böröndös Street, in the district of Újpest, Reformed Roma communities in the Carpathian Basin gather to speak to God with one soul and to pray for each other and for European Romas. This year, reconciliation, needed in all parts of our current lives, is the focus of the event.

Apostle Paul told the Corinthians that God was not only reconciling Himself with us through Jesus Christ, but also the world with itself; in fact, through Him, we also become ambassadors of peace (2 Corinthians 5:18-20). At reconciliation seminars, the importance of reconciliation has already been imprinted in dozens of hearts, so it is no coincidence that this is the most important pillar of the strategy of the National Reformed Roma Mission adopted by the Synod.

On Saturday, April 6, more than 350 Reformed Romas delighted in the joy of belonging - especially in view of the fact that five years ago, during the first prayer day, it seemed impossible to fill the Reformed Church of Káposztásmegyer on International Romani Day. 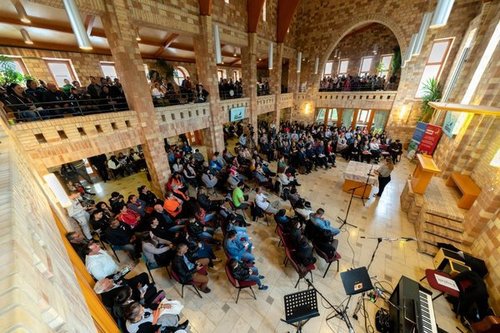 Just as impossible as the Romas of Hungary to make their voice heard as one. Anita Tóth, National Roma Mission coordinator, told us that it had a big influence on her when she first heard songs being performed in her Roma mother-tongue from a group of young people of Szatmár called Kalyi Jag (Black Fire). It was also a big influence on her that the Romas were able celebrate International Romani Day that began on April 8, 1990. “God likes these progresses, and He prepares people today, as well, to work with the Roma people,” Tóth said in her toast. She then called for prayers for Uncle Dani Szabó, who is like the “godfather” of countless congregations and currently in hospital.

“Twenty five year ago, at the site of this building, rabbits ran free,” recalled József Szakolczai, the janitor of the local congregation, affirming the grace that called people to Káposztásmegyer. Rev. Tibor Neuwirth, associate pastor of the congregation, compared the guests, who proudly wore the colorful cockades made by Romani Design on their chest, sitting in the crowded rows, to the redeemed army of the Apostle John. 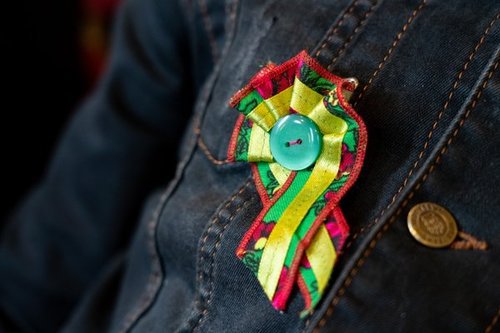 Guest speaker of the prayer day, Péter Bakay, Lutheran Roma Mission coordinator referent, expressed his satisfaction with the greeting, Blessings and Peace, and that reconciliation plays a central role to the Reformed people. Rev. Eszter Dani, head of RCH Roma Mission Office, read from the 139th Psalm, “Search me, God, and know my heart.”

At the beginning of the prayer day, Lilla Eszter Kalla, project coordinator of the Together and For Each Other Roma Mission project,  introduced herself, explained the rules of the competition, and announced the opportunities to apply, while participants wearing the program’s t-shirts were handing out brochures. Continuing the day, a group of reconciliation trainers organized within the project also held a special meeting.

Among them was Árpád Bandor, who has been participating in the events with his family since the beginning. He had shared his testimony and his musical talents, and now, for the first time, he shared the word of God based on the guiding of the prayer day. “Can we even understand, what does God’s peace mean?” asked the seminary student. 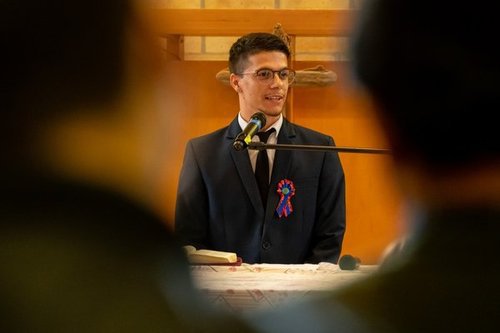 “He loves us because Jesus’ blood is covering us. In fact, we could also say that God is a God with glasses and those glasses are no other than Christ himself – he sees us through Him and deletes our sins,” said Bandor in his opening speech, who is also a resident at the Reformed Roma Collegium in Budapest.

The simple believer can only give thanks for this: on the prayer day, a group of congregation members from Olaszliszka and Bodaszőlő led us to glorification – the latter performed a song that they wrote at the reconciliation training, called The Hymn of Reconciliation, for the first time. “Stand in the gap, be an ambassador of peace, Jesus took all your pain…” – uplifting feeling, as three hundred and fifty people sing these lyrics together. 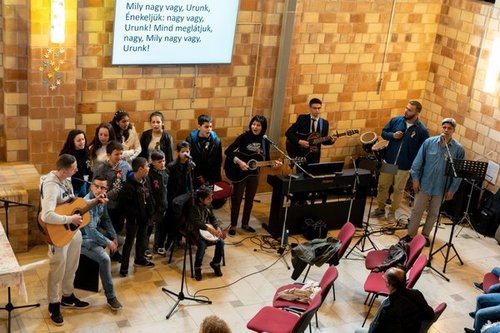 Everything good is given through Jesus

It was a special and joyous moment that Rev. József Steinbach, the bishop of the Transdanubian Reformed Church District, proclaimed the word of God among us again since 2015. The bishop, responsible for the mission of the Reformed Church, taught those attending prayer day about leaving the old and creating new (2 Corinthians 5:16-17).

“We used to know and wanted to know God in human form, and so we treated ourselves as well,” Rev. Steinbach said. He then exemplified his thoughts with a familiar situation: social media is focused on physical beauty, and the comments all reinforce it. “In this old one, we destroy, not only ourselves, but also each other. However, in Jesus, everything good is given to us. I give thanks for this prayer day, as it also helps to cleanse the old,” he added. 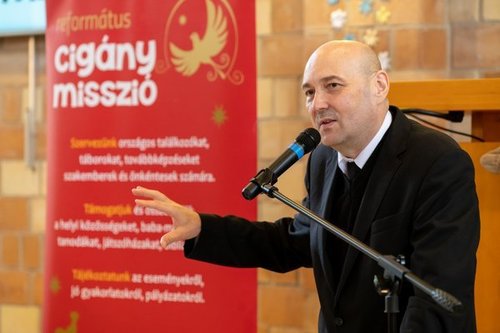 Prayers for the European Romas

Prayers, which are at the center of all our meetings in April, are indispensable for the Reformation. The prayer series for Romas, compiled by the female representatives of the Presbyterian World Mission and the United States Presbyterian Church, were translated by Rev. Lajos Békefy, a retired prison chaplain, at the beginning of this decade. The prayer series make us think about the situation of the Roma from year to year. 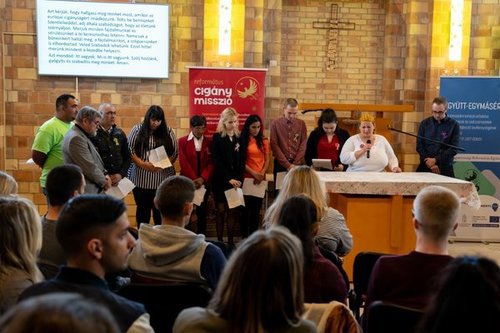 In addition to the time for prayer, the Roma Mission event cannot be complete without personal testimonies: we give thanks that the Holy Spirit is always compelling Roma brothers to share the difficulties and joys in their lives, how the Spirit works in and through them in recent years.

Ferenc Rupa has been in prison for a long time, and for 23 months he was a prisoner in a private cell. "Between the prisoners, the Bible is shared hand to hand, but in many cases, only to roll cigarettes out of its paper,” he recalled. 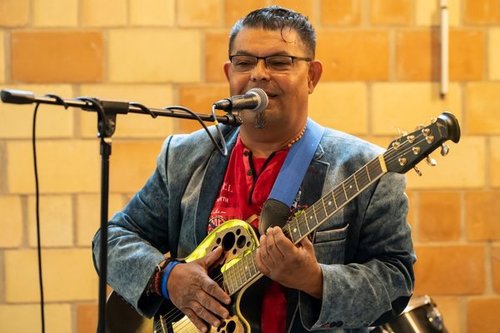 “One day I saw a scrap of paper and the Lord’s Prayer was written on it. I visited Rev. Jonathan Sándor Szénási, prison pastor at Baracska, and my life changed,” he said,  adding, “Jesus is constantly knocking on the door of our lives - sometimes it's time to ventilate!"

From Transcarpathia, Rev. Béla Horváth came to Budapest on Friday night due to the long journey, but his bag was stolen during dinner, together with his Bible, full of notes. "I believe that person will find a lot of treasure in it," he said smiling.

With the story of Jonah, Rev. Horváth spoke of the need for storms in our lives that shake us out of the dream world, "I was there in that ship, but I'm grateful to God for leading me like this!"

The beneficiaries of the Drug Rehabilitation Home in Ráckeresztúr regularly testify in the prayer days, now Béla Burai, awkwardly, but more confident, shares the story of becoming a dependent, making his family's life more difficult. “In the past 13 years, I haven’t had one clear moment - I am now working on regaining people's trust,” he shared of the greatest challenge of his life. 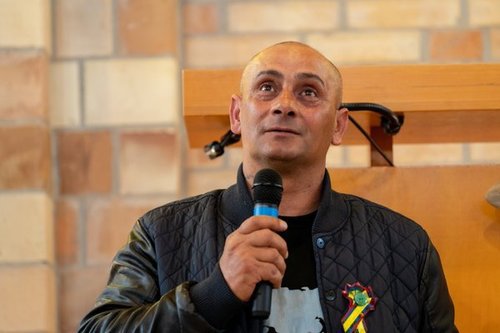 “I wasn’t an angel,” Sándor of Vajdácska began his testimony, “I was an alcoholic. And one day, I realized that I had sold all of the furniture in the house. My family was sleeping on a bed of bricks.”

In 2012, Sándor heard about the Korean Protestants doing missionary work in Bodrogköz, where he started to attend home bible lessons. He then visited the village church. In 2015, he and his wife were confirmed, and he has been serving as elder of the local Reformed Church for three years now.

Ransom victim in a moment

After the explanatory and exemplifying stories, Rev. Eszter Dani asked a few brothers to pray for the witnesses. What followed was not only a surprise for the participants, but also for the colleagues of the Roma Mission: the young people of Bodaszőlő took the microphone and thanked the team for their work in words, and then with a song and a gift. 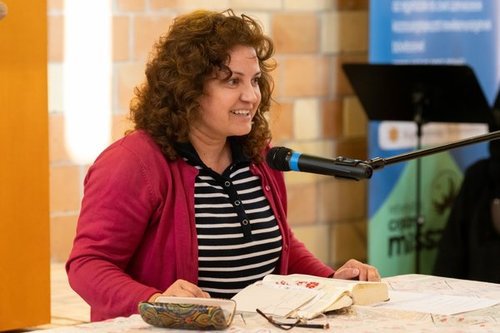 Rev. Irén Gregussné Buzás, the Roma Mission coordinator of the Transtibiscan Church District, in her speech, illustrated Christ as the ransom victim with a story, "Recently, I parked my car in an illegal place and I got the penalty, but, at that moment, I noticed that someone had paid it for me," she waved the ticket as an evidence, "Jesus did the same for us, so we have a duty to do good with others."

We are happy to know that we are free to do so. Looking at the faces of those present on prayer day, I saw 350 different lives, but there is something in common: they all received the gift of reconciliation with God, their fellow human beings, and themselves. A treasure that the Lord has handed over to us in Jesus Christ. It would be a mistake if we didn't use it.