Compared to other universities around the world, Károli Gáspár University of the Reformed Church in Hungary is still in its adolescence, but it is nevertheless a time of celebration in Budapest as the school and students celebrate its 20th anniversary.

Károli University is a church-run school that was instituted by the Synod of the Reformed Church in Hungary (RCH) in 1993. The university is commemorating this milestone anniversary with an international conference, entitled "Confessionality and University in the Modern World," that focuses on the role, challenges and opportunities of Christian universities in a contemporary landscape. 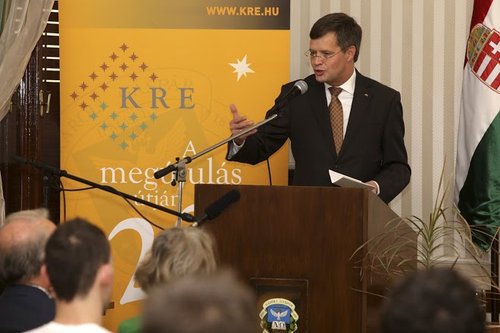 The celebration opened on 15 October with several words of congratulations from religious university representatives and church leaders, including a welcome letter from the RCH's presiding bishop, Gusztáv Bölcskei, read on his behalf by General Secretary Zoltán Tarr. The conference was broken up into three panels across three days, and throughout the event, conference participants and interested students crowded in to hear presentations from guest lecturers and academics from Hungary, Europe and North America.

Dr. Jeff Bouman from Calvin College in Grand Rapids, Michigan presented a lecture focused on the reality and challenges for Christian universities in an increasingly secular academic arena, citing his specific experience at the Christian, private Calvin College. He concluded that these universities are battling over the idea of leading with the head or the heart. However, while academia may be struggling with this fundamental question, it does not mean that there has been a decrease in the Christian presence within the schools, because the Christian representation of a school is not only found in its classrooms but within its professors and students.

This sentiment is evident at Károli University as well. The school established to continue the traditions and heritage of the RCH is open to all eligible students and faculty regardless of denomination, and stands proudly beside centuries-old Hungarian and Reformed higher education institutions.

Conference lectures are scheduled from 15 to 17 October in the Faculty of Humanities of Károli Gáspár University. More information on the event can be found here.

Belkenende began his lecture asking, "What does the world mean by the word 'Calvinist'?" He said, the first association, what first comes to mind, when dealing with Calvinism is: "Calvinists are hard-working people". The professor emphasised seven elements of his thought process on Calvinism: devotional inspiration, the direct relation between man and God, theology, freedom of religion, democratization of the church, organization of the society, and civil activity. According to him the Protestant values are not at all remnants of the past, but that these values might be presented as inspirations in politics and history of the 21st century.

"Here in the university we can also ask the following question: Is there any future for our children and grandchildren? The question of values is extremely important. Values are contributing sources of inspiration to find new ideas, solutions, and perspectives." – said Professor Belkenende, who thinks that Protestantism gives a moral compass not only in common life but also in the sphere of business and economy. Nowadays moral crisis is agitating, but the Christian values might guide the way: the principle of 'love thy neighbour as thyself', responsibility and ethics. When we analyse governments and business, our conclusion is, that these values are the bases of their operation. A Christian scale of values in turn can be strategy.

Belkenende concluded by discussing Protestant philosopher Abraham Kuyper, who firmly believed that within societal issues God's will must be perceived. In addition, Kuyper thought people must be free in the creation of their own relations, and that the state has to recognize these variations.