After a long period of anticipation, the RCH elections ended on 28th November.

All the four church districts announced the results of the Elections. In three of them the current leadership was re-elected. In Debrecen the outgoing Bishop Gusztáv Bölcskei will be succeeded by Károly Fekete, the current Rector of the Reformed University in Debrecen. The Presiding Bishop for the next six year period will be elected on 25th February 2015, at the first meeting of new General Synod.

After a long period of anticipation, the RCH elections ended on 28th November. This was to elect nominated candidates for the positions of Presbytery: Dean, Lay President and Their Deputies. Church District Positions: Bishop, Chief Elder, Deputies, Church Councillor of the District. Synod Members and Proxy Candidates. For more details, visit the election guide.

The outgoing bodies and officers will remain in office as interim officers until the new officers are installed and take up their new offices and new bodies are constituted and begin their work.

The elected candidates for Presbytery Positions will be inducted into their new positions before 31st December 2014. While those at Church District level will be inducted at the end of January 2015.

The new General Synod will be constituted on 25th of February 2015, where the Presiding Bishop (Ministerial President) and the Lay President (Chief Curator) of the Synod for the next six years will be elected from the following Bishops and Lay Presidents elected into Church district positions. 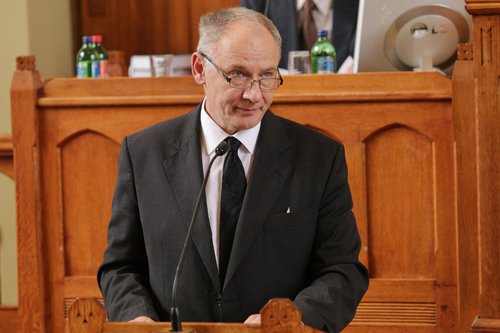 István Bogárdi was born in 1956 in Sárbogárd, in a pastor family with seven children. He is married, has three children and one grandchild. Rev. Bogárdi has been serving as the pastor of the Budahegyvidék Congregation since 1997. He received his master’s degree in 1983 in Chicago and his doctorate degree in 1994. He has been teaching theology in the Theological Academy in Pápa since 1998 and received habitation in 2002. He participated at several ecumenical discussions within WCRC and CEC CiD. He is member of the Collegium Doctororum and the Commission for Formation of Pastors in Hungary and appointed for Ecumenical Dialogue with the Roman Catholic Church. His special fields of research are the history of symbols and confessions of the different denominations and their Comparative study. Since 2003 he has been serving as a Bishop at the Danubian Reformed Church District and has been reelected twice. 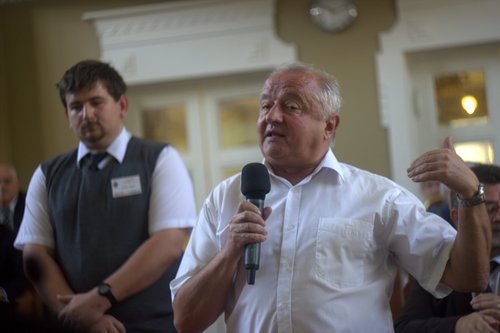 László Tőkéczki was born in Szikszó in 1951. He graduated as a teacher of History and German at the universities of Debrecen and Budapest in 1975 and has been working at the Faculty of Humanities at Eötvös Loránd Tudomány University (ELTE) since 1981. His field of expertise is the history of ideas, the history of press and education and the Protestant Church history in the period between 1890 and 1940. Since 1994 he has been the editor-in-chief of the journal “Valóság” and since 1990 he has been the columnist of the journal “Hitel”. He is the Dean of the congregation at Budahegyvidék. 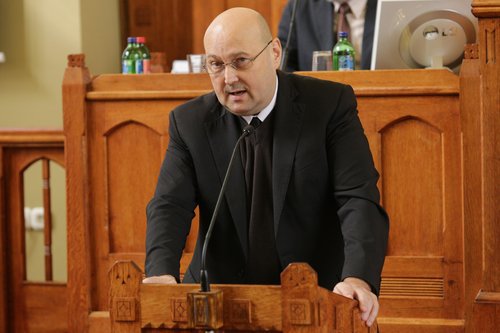 József Steinbach was born in 1964 in Veszprém. He is married with two children. He graduated at the Károli Gáspár University of the Reformed Church in Hungary in 1999 and then received a Degree in Anthropology, Ethics and Social Sciences at the Pannonia University in Veszprém in 2008. Since 2009 he has been the columnist of “Ige mellett” in the Reformátusok Lapja” (Reformed Journal). Besides serving the church, he began examining the field of homiletics. Since 1999 he has been a lecturer in the Practical Theology Department at the Reformed Theology Academy of Pápa.  He is the President of the Ecumenical Council of Churches in Hungary. He has been serving as the bishop of the Transdanubian Reformed Church District since 2009 and has been reelected. 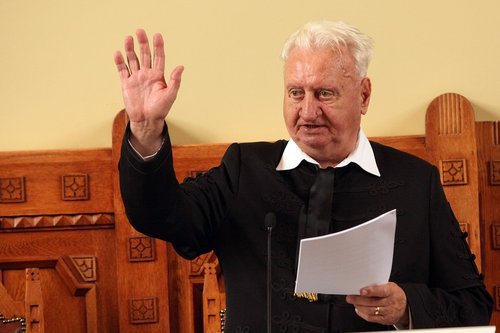 Pál Huszár was born in 1941 in Várpalota as the fifth child of the family. He studied Pedagogy at Eötvös Lóránd University (ELTE) and worked as a secondary school teacher for twenty-eight years. He has been the elder of the Reformed Congregation of Várpalota for twenty years. He translated several books from German for the John Calvin Publishing House. In 2008 he was elected as the Lay President of the Transdanubian Reformed Church District. He wrote a book about the life of John Calvin and the Life of Reformers for the announcement of the Calvin Memorial Commission in 2009. 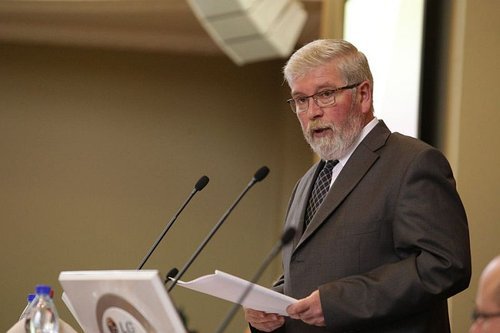 József Csomós  was born in 1956 in Eger. He is pastor in Gönc, and has served in 12 villages for 16 years together with his wife. They have four children and two grandchildren. Bishop Csomós studied in Debrecen between 1970 and 1980 at the Reformed High School and the Reformed Theological University, receiving his Ordination Exam Certificate in 1980. The congregation in Gönc invited him to be their pastor in 1994. In 2004 his wife was elected as the second pastor of the congregation. From 1991 he served as the Dean of the Abaúj Presbytery for two terms and has been the Bishop of the Cistibiscan Church District since 2002 and has been reelected twice. 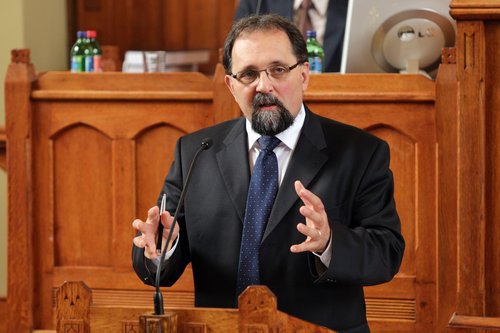 Tibor Ábrám was born in 1961 in Tasnádszántó in a pastor’s family and was brought up in the several congregations of the Partium. He received his diploma in physics and physics teaching at the Babes-Bolyai University in Kolozsvár (Cluj). Between 1986 and 1993 he worked as an assistant lecturer at the Physics Department of the University of Miskolc. He is married and has six children. The Cistibiscan Reformed Church District appointed him as the Director of Lévay József Reformed Grammar School on the  occasion of its re-opening in 1993. Mr. Ábrám has been elder of the Miskolc-Avas congregation since 1987. 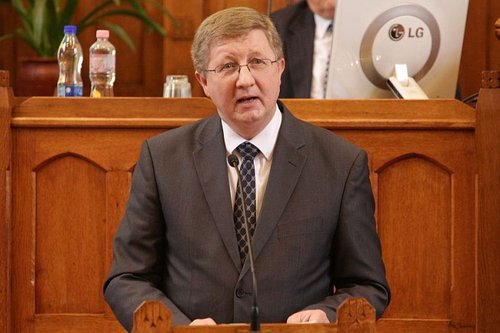 Károly Fekete was born in 1961 in Kisvárda as the son of a pastor and theology professor. He became a theologian in Debrecen. Between 1988 and 1992 he served as a pastor in Debrecen and taught at the Theological University. He has been the rector of the Debrecen Reformed Theological University since 2011. Since 2003 he has been the Vice-President of the Doctoral Collegium of RCH and between 2005 and 2014 he was the secretary general of the Regional Committee of the Hungarian Academy of Sciences in Debrecen. 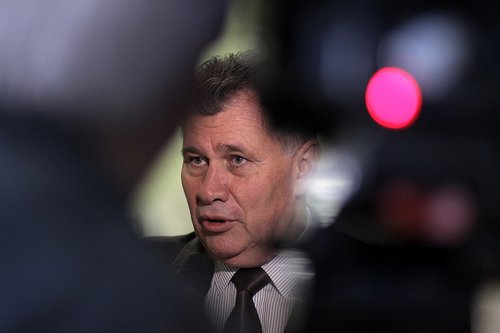 Gusztáv Adorján was born in 1954 in a small village in the county of Szatmár. His father was serving there as a Reformed pastor. In 1980 he graduated as a Medical Doctor from the University of Debrecen and since then he has been working as an Obstetrician Gynecologist in Nyíregyháza. He is married with 3 children and a grandchild. Since 2010 he has been member of the Local Government of Nyíregyháza with the support of the FIDESZ-KDNP party.