Rev. Dr. Jerry Pillay is the president of the World Communion of Reformed Churches, of which the RCH is a member church, and also the General Secretary of the Presbyterian Church in South Africa. He recently made a trip to Hungary where he received an honorary doctorate from the Debrecen Reformed Theological University. In his interview below, he discusses the importance of unity within the reformed family as well as the special meaning associated with receiving this honorary doctorate. 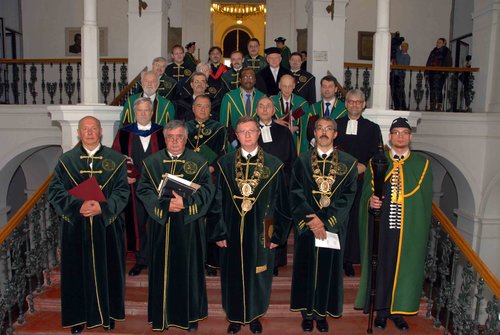 You just met with some of the leaders of the RCH. May I ask what you discussed? Was this a WCRC discussion or as the General Secretary of your church in South Africa?

Well I think it was both. Some of the things we discussed were really quite relevant to WCRC and the developments in terms of Reformed theology, understanding and work. We talked about partnerships in that. We talked about how this church can be of assistance particularly in terms of positive solutions – to understanding certain issues of conflicts within the Reformed family. We were talking about the fact that there are lots of diverse opinions about things within the Reformed family and how that can create conflicts and divisions, but how we could also be able to channel those things positively.

My invitation to this church is to contribute positively to that, because in a sense, you have things together within the reformed structure. In this country, Hungary, the reformed world is quite strong, and it's not similar in many other parts of the world where reformed churches are actually struggling to survive, experiencing divisions. But how can we actually create spaces in which we can bring people to talk together and learn from each other in a way that will be building and not destroying?

This idea of a "reformed family," this communion that you have, why is it so important today that these churches have these ties together?

Well I think identity is crucial in terms of who we are as Christians. We all certainly understand and accept that we are a part of a wider Christian family, and we don't want to play Christians off Christians, but just as you would have the Lutheran Federation/the Anglican Communion that tries to center and focus on perspectives that come from a particular reading or from a particular viewpoint and interpretation of Scripture, Reformed people need to do the same. And one of the things that reformed Christians have always done is try to interpret the context, try to analyze society, try to look at the issues of today and relevantly address the Gospel message by asking, what does the Bible have to say to us about what we're experiencing now? Issues of relevance, issues of identity, issues of deep theological research, the need for reformed Christians to say that we have a particular perspective on something, becomes crucial. So, identity and relevance becomes important, but not only issues of identity and relevance. The need to be together is also about strategy. How then do we actually strategize together to work with worldwide issues? How can we as a reformed family participate in God's mission in the world? But also knowing that we come from a particular focal point as being reformed Christians, it helps us then to engage with other Christians.

One of the big elements for us is the issue of ecumenical engagement. We realized quite solidly that we are not churches by ourselves. We as reformed Christians are churches with other churches. And especially if we are to claim God's mission in the world, then we cannot claim any exclusive rights. We've got to ask about God's mission. But again from a reformed perspective and a reformed understanding, we enter into a wider pool of Christian understanding and engagement. So it helps us come together as reformed Christians to think more analytically, to think more spiritually, to think more contextually about issues and to establish what we say about something. But that doesn't mean that we agree on everything, so that complicates things by itself.

How does this trip to Hungary for your honorary doctorate work to strengthen these communication lines and ideas from the reformed family.

Well, I think this opens the doors. It opens the doors of stronger connection with the World Communion by the virtue of the fact that its president has been honored in this way, but it has also strengthened the ties with member churches; just witnessing the number of people who have come and received doctorates here. It was quite interesting to see how they are connected, people within Europe itself, and identify different people from different experiences and different contributions, coming together. For me it was quite an amazing witness of how reformed people involved in different countries and even in different fields have been brought together and recognized in this way. That all really speaks about networking. It really speaks about the fact that we are not just lost in one location, but we are mindful of other people who are doing work as reformed Christians in other parts of the world. I think giving this doctorate is a marvelous indication of that sense of going worldwide, because with me goes the connection to the university, to the church. So, it opens the doors in terms of that kind of connection.

What did it mean for you personally to receive this award?

I must say it was very special. I was quite overwhelmed when I was approached, if I would consider accepting the doctorate. For me it's a recognition not just of the person, but it was more a recognition of the office that I carry. It was a recognition of the worldwide movement of reformed churches. It was a recognition of how one takes seriously reformed connections. So it said more things than the person. I think when I accepted this as well in a great sense it was me receiving this on behalf of a wider family of reformed Christians, leaders and contributors. It was a humbling experience from that point of view. One of the most outstanding things that happened as well was a surprise visit by the South African ambassador to Hungary. I've contributed immensely in a religious leader's perspective to issues in South Africa. Also in the days of apartheid I contributed enormously to developing South Africa, to dismantling South Africa in apartheid. That is what my Ph.D. thesis actually. So having the ambassador here was a culmination of emotions. Hey, South Africa even appreciates this. It was really special. I really felt it was not just the church here or the university here but it was my country also supporting me and honoring me in the role that I've played in terms of development.

You presented a paper at the ceremony as well. Can you tell me a little bit about what it is about?

As I said, one of my focuses as president of WCRC is concern about the future of the reformed tradition and theology and faith. And so I've been doing some research in this area to see what we need to do in order to assure that the reformed family will continue to grow stronger in the years to come. My title was: Revival in unity of reformed churches. Reformed churches are struggling to survive financially and in other ways as well. So the question is how do we revive it, but also the issue of unity because the issue of disunity becomes a very serious factor in terms of splitting churches, breaking churches, which is a tragedy of what it means for us today as reformed Christians because we could be so much stronger and better together, and yet we just seem to multiply that division.

I spoke about worship renewal, and I think that one particularly will strike a chord for young people, because we cannot think that reformed liturgy is steeped into a particular format and style. Calvin taught us about certain styles of worship and singing hymns in church but I'm certain that Calvin time it works, but in the 21st century we need to ask new questions about these things. We're not being un-reformed when we ask those questions and when we actually break into something new, because one of the important principles of being reformed is that we are continually reforming, and many people forget that.

They forget that reformed that reformed Christians are continually reforming. The reformed church is continually reforming. The world has changed. People have changed. People are asking for different things. There's no sense preaching to empty pews. The task is to get people in. I'm not saying we must use gimmicks and fads to attract crowds, but I'm saying let's realize the world has changed. Let's ask, how does this actually affect spiritual renewal, spirituality, and be able to meet people where they are and say, we meet you where you are, we want to offer you a spirituality of life that is relevant in the context from which you are coming.

The idea that we reformed people and the idea that we are continually reforming must be more deeply ingrained in our understanding of being reformed. I think it is not. I think especially in the area of worship, and what younger people look for today in worship is something we have to be cognizant of very seriously. Those are some of the ideas that I shared with regards to what we can do to change the environment in terms of reformed growth and development.