The Synod Building of the Reformed Church in Hungary is the central point for the Church. The Church celebrates the history of the building that has stood witness to the life and ministry of the RCH for more than a century.

In 1897, the General Convent of the Hungarian Reformed Church determined that a general meeting hall was required to house the assemblies, committees and offices necessary for the work of the Convent. As plans developed, it was decided that, because the HRC did not own an acceptable building to serve this purpose, a separate lot of land would be purchased for the erection of a new structure. A committee to oversee the construction was established, headed up by Convent president, Dezső Bánffy and Convent representative Ernő Dókus. 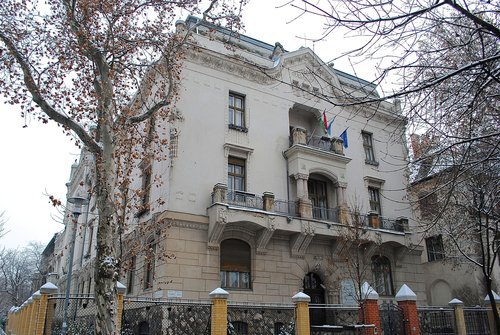 The Synod ultimately decided that this new building should include not only an assembly hall but the presidency conference room and central offices, as well as a residence for seminary students. The new features added function of the building, but forced the cost out of the proposed budget of 310,000 Hungarian crowns. Therefore, a bank loan was necessary to pay for the additional expenditures. Each church district agreed to pay for a portion of the loan to make the ambitious project possible.

The committee then started the process of finding the right piece of land, one with a convenient location near a tramline. A piece of property on the corner of Thököly Street and Szabó József Street was chosen, but unfortunately the land was sold before the bank loan was acquired. In the end, the Church found a suitable area on Szabó József Street. The only negative for this new location was it's distance from the tramline, however it made up for this with its peaceful environment. 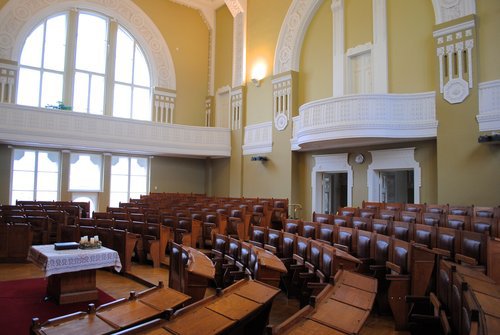 In 1907, the presidency of the Convent launched an architectural design contest. The winning design was awarded 1,000 Hungarian crowns and was entitled "Mighty Fortress." The Church also purchased the rights to the second place design "Light" and three other designs. It then commissioned Alfréd Hajós and János Villányi to compose a final version out of these works. According to the finalized construction plans, the Synod Building shows characteristics of historicism, which is a combination of historical styles with the implementation of current design. Construction began on 16 March 1908 and was finally completed on 5 April 1909. The first Synod session was held that April in memory of the 400th anniversary of Calvin's birth.

The Synod Building stood for several decades with no major renovations, and gradually the apartments within the building were converted into offices. Significant alterations were made to the building between 2003-2004. The Synod Hall was redecorated on several occasions, the last of which was in 2005. The church refurbished most of the furniture, installed modern audiovisual technology and restored the original colour of the Hall. Many offices still use the original furniture, and most of the rooms are lit by original chandeliers. 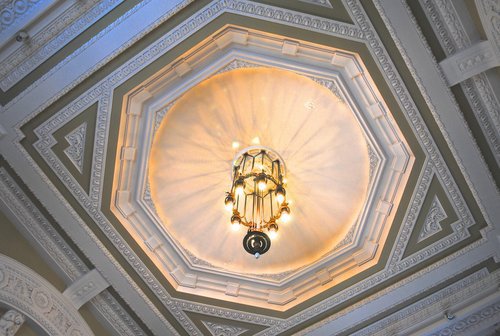 Currently, the Synod Building is home to the Synod Office, Synod Council, presidency of the Synod, and since 1966 the Budapest-Baross Square Reformed Church. To this day, it remains the meeting place for the Church's highest legislative body, the Synod.