As the United Nations Climate Change Conference (COP21) draws near, Christian people are planning a pilgrimage to express their solidarity with those directly affected by climate change, and their wish to unite in protecting the environment.

As our careless harnessing of the world’s energy around us is catching up with us, climate change is becoming an everyday problem around the world. The only way to prevent further damage and to heal the environment around us is if we all work together to reduce future damage to the environment. As the United Nations Climate Change Conference (COP21) draws near, Christian people are planning a pilgrimage to express their solidarity with those directly affected by climate change, and their wish to unite in protecting the environment.

The pilgrimage was organized by the World Council of Churches promoting the concept of “pilgrimage of justice and peace” including climate justice.  Its goal is to reach Paris by December, the start of the UN COP21 conference. The pilgrimage is going from North to South with Christian people expressing a united will to protect the environment. Pilgrims from Europe and Africa – on foot or on bicycles - will help to bring awareness to the environmental crisis, the fact that it’s happening today, right now, and that we have a responsibility to prevent even more escalation. 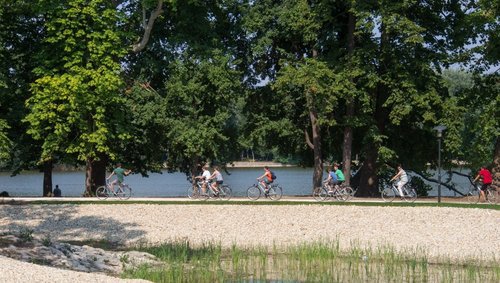 “Paris is a milestone in our pilgrimage of climate justice. Yet Paris is not a destination. As people of faith, who are expected to offer a moral compass to climate dialogue, we need to strategize for 2016 and beyond,” said Dr Guillermo Kerber, WCC programme executive for Care for Creation and Climate Justice. He also explained that the WCC is planning to bring strong voices from religious communities demanding a fair, ambitious, and legally binding treaty in Paris.

"Bicycling for your neighbour –
help them breathe
protect them from flood
help them eat
help them live
help to save our future!”

(Motto of the Hungarian campaign)

Bicycles and cycling have been symbols for many environmental protection projects, and for a good reason. Riding a bicycle emits 10 times less carbon dioxide than that of driving a car.  If all of us in Europe choose to cycle just 5 kilometres a day, we could reach half the goal of the Transport Sector’s carbon-dioxide reduction plan by 2050. And if we could reduce carbon-dioxide emission, the greenhouse effect would slow down, chances of extreme weather conditions would reduce, and the people most affected by climate change could live in a much safer environment.

Back at the end of July, during Starpoint, Hungarian believers have already made a small, “warm-up” cycling procession to express the values of this current pilgrimage. And this time, of course, they are joining the pilgrimage, again, in the form of “Bicycling for your neighbour!” a cycling relay. The cycling will take place during the Week of Creation* (an event focusing on different aspects of environmental changes itself) between 27th of September and the 4th of October. The route is going from East to West, starting from Beregovo (Beregszász) and ending in Sopron. On the 4th of October, our Austrian brothers and sisters will take over in Sopron, going to Germany, where pilgrimages are passing through.

Week of Creation is an event where Churches of Hungary think together about climate change and the part of churches in preventing further damage. It’s going to take place at the Lutheran Church of Sopron from September 27 to October 4. The theme is “A rich and a pauper – climate justice”.