Four politicians from four different political parties attended an event at the Károli Gáspár University of RHC on the evening of 14th March. They discussed their opinions about education, social inequalities and relationship issues in the midst of the political campaign.

The event called “Four People, Four Opinions?” was organized by theologians at the Károli Gáspár University on 14th March. “As we approach the elections, we ask what do the politicians think about the issues that determine our lives and about Christian values,” the previews promised, and indeed, the night before the National Holiday, György Gémesi (LMP-Új Kezdet-Politics Can Be Different -New Start), Gergely Gulyás (Fidesz-Hungarian Civic Alliance), István Hiller (MSZP-Hungarian Socialist Party) and Ádám Mirkóczki (Jobbik- Movement for a Better Hungary) engaged in a debate about family, faith and religious education. The occasion gathered great interest, and the room was fully crowded. 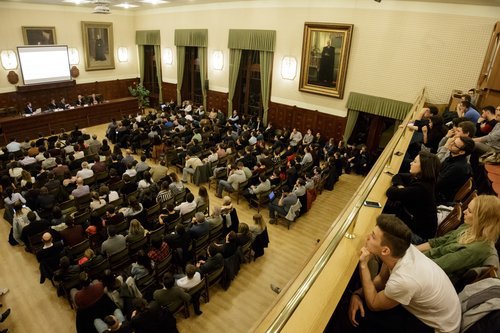 “Christ is not only the head of the Church, but he also governs the whole world. There is no area of our lives that would not fall under his rule,” said Tamás Márkus, the university chaplain, at the beginning of the evening on why they thought it was important to table four different political parties in a Reformed institution to discuss religious, public and political issues. “Throughout our whole lives, our decisions and even of our public involvement, we must testify Jesus,” emphasized the young pastor, who regularly organizes events on topics on which college students are the most interested in. What gave the actuality to this four-party conversation is that the leaders of the Reformed Church in Hungary have encouraged everyone in their most recent call to live up to their voting right, and before that, be properly informed for the sake of responsible decision-making. András Gér, the RCH general secretary, moderated the debate between the politicians. 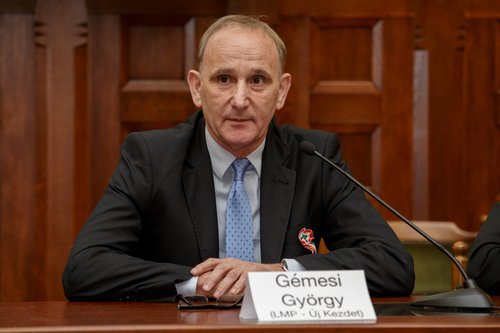 “I am a faithful Catholic; I am not a bigot, a hypocrite, nor a person of disguise.”

György Gémesi is a medical doctor, mayor of Gödöllő since 1990, and president of the Hungarian Association of Local Governments. He was also a member of the Parliament in the colors of MDF between 1998 and 2006. In 2017, he founded a new party called Új Kezdet, and for this year’s election, a joint list of potential candidates running with LMP and Új Kezdet was created. He says faith is a private matter, we shouldn’t mix faith with politics and state affairs.

The four politicians were first asked about marriage and family, topics on which all four politicians agree is a very important social institution. These are topics we need to protect, said István Hiller who is happily married for 30 years. Family is a decisive value to György Gémesi as he grew up with his seven siblings, while Ádám Mirkóczki who is raising three kids, calls marriage the most important form of community. According Ádám Mirkóczki, registered relationship status is an unnecessary legal category, whereas the representative from Fidesz, who also supports the institution of marriage, leaves the decision to the citizens to choose from the legal categories. The mayor of Gödöllő has similar opinions about the question. Gergely Gulyás and Ádám Mirkóczki are both against same sex marriage and adoption by same sex couples. Whereas left-wing politicians believe that the definition of marriage– a relationship between man and woman – can only change in the Fundamental Law of Hungary by referendum. 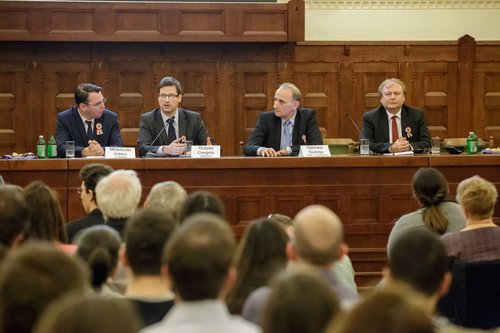 Gergely Gulyás (Fidesz) reminded attendees that thanks to the different forms of Family Support implemented after 2010 – as various family-friendly taxation rules – the fertility rate rose from 1.24 to 1.5. Görgy Gémesi (LMP-Új Kezdet) also supported the reducing of taxes for families, however, he believes this social protection should match the support system of the local governments rather than those of the centralized government. For example, the LMP candidate raised a concern that free books and school meals were not provided on the measure of indigence for families. Ádám Mirkóczki (Jobbik) was also very pleased with the tax benefits for families, but argued that the tax benefits were tailored to an idealized family model (mom, dad, three kids), and that they do not count for the sad reality of broken families. According to Gergely Gulyás, in setting the frameworks of the benefits, the government did not want the benefits to be seen as social support. “Every child is valuable,” no matter the financial circumstances in which he or she was born into. But he acknowledged that having a second child should be encouraged with a more significant tax relief than the present one. 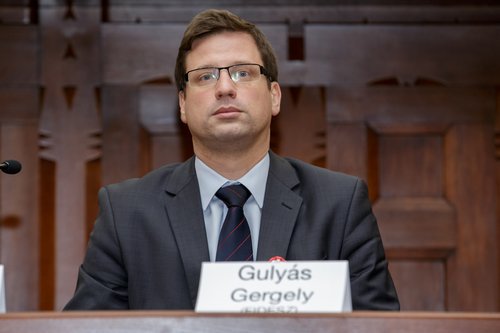 “I am Reformed; I believe in God.”

Gergely Gulyás graduated from the Reformed High School of Lónyai Street in Budapest. He is a lawyer, a member of the Parliament from 2010, Fidesz's Deputy Chief of Party and parliamentary group leader of Fidesz since 2017 October, and in the present cycle he is the Vice-President and Chairman of the Parliamentary Legislative Committee. 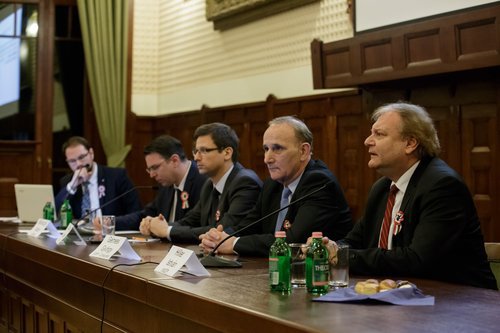 Among the various topics, politicians discussed the issue of jobs as well. According to the spokesman of Jobbik, Ádám Mirkóczi, in the light of social inequalities, we should not continue the last 28 years of politics. From this point of view, the government’s Public Employment Program is a forward-looking initiative in which 140,000 people are currently participating, said Ádám Mirkóczki, and he also warns about the misuses of it too. His party is planning to introduce the wage union, benefitting small businesses and its employees instead of multinational corporations. He says, the number of Hungarian people working abroad shows that it is difficult to live from the current salaries in Hungary; a drastic wage increase is necessary in the near future. Comparing wages to those in Western European states is a misguided idea, because we cannot live given the opportunities within our own region either (yet), said István Hiller (MSZP). “We have to play on this pitch first,” said Hiller, who was the second Gyurcsány-cabinet and the Bajnai-cabinet’s Minister of Education.

“At the center of my thoughts, there is a person who shows respect to others.”

István Hiller is a historian and a university professor. A member of the Parliament representing MSZP since 2002, between 2003 and 2005, Minister of National Cultural Heritage, and between 2006 and 2010, Minister of Education and Culture. In the present cycle, he serves as the Vice-President of Parliament. He does not consider himself a believer however he pursues peace in his private life, as well as his political life. 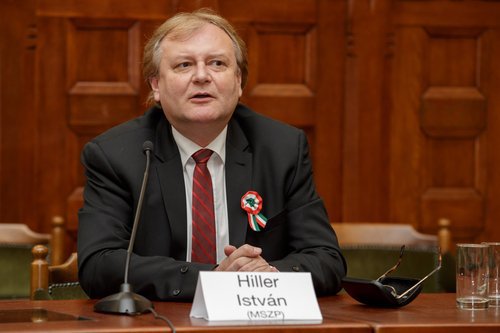 What do the four politicians think about religious schools, mandatory choice of faith and ethics, and the status of education? asked the RCH General Secretary András Gér. Gergely Gulyás, was one of the initiators of the amendment of legislation that allows for optional faith and ethics studies. According to his colleague from Jobbik, religious education should be a part of general literacy, and “youngsters have never needed it as much as they need it now, when the media throws so much garbage on them.” “Religious education strengthens their spiritual immune systems,” said Ádám Mirkóczki. He also emphasized that Church and school cannot replace, only complement, the complete presence and guidance of parents. 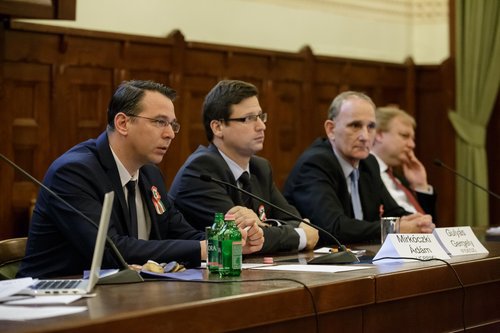 None of the politicians has a problem with kindergartens and schools maintained by the Church if it is a result of free decision; although some people have complained that schools should not be maintained by local governments. István Hiller and György Gémesi warned of the negative consequences of the education policy of the government, which they find over-centralized. The nationalization of local schools after 2010 did not put an end to the fallback of rural institutions; according to the former Minister of Education, István Hiller, the quality of the stronger schools has decreased. "According to every domestic and foreign survey, the Hungarian public education system is in deep flight, social mobility has been frozen. A change in the education system is required," said Gergely Gulyás, who had to take a stand against the politicians of the opposition. He admitted that at first the centralization was excessive, however, it was adjusted later. He thinks that the institutions in disadvantaged regions are pulling down the national average. Decentralization does not guarantee better functioning of the system, yet.

"I am a God-fearing Catholic, and I raise my children in this spirit."

Ádám Mirkóczki is a journalist, a member of Parliament since 2010, the Notary of the current Parliament, the press spokesman of Jobbik, and head of the Cabinet of Church Affairs. In his opinion, people cannot live without faith, the world would be a better place if everyone gets to the point of repentance and no one can insult or provoke any religious community without any consequences. 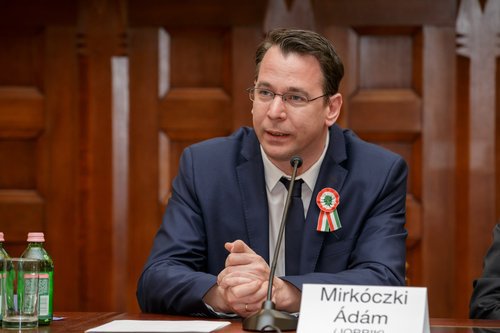 After the debate, the mostly-student audience asked their questions. The people in the audience were interested in various topics, including, how the government can better support small and medium-sized businesses, so they would not have to live on minimum wage for years? Would they allow euthanasia? What do they think about gay marriage and cohabitation? 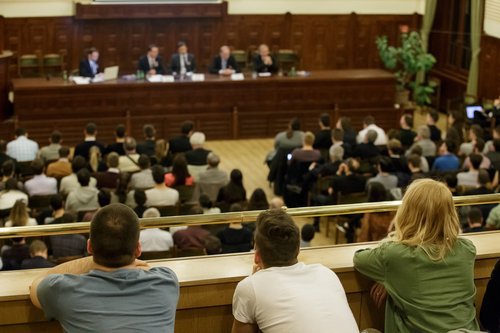 The politicians condemned unprincipled debates, and thanked the organizers and the audience for an evening of real dialogue and mutual listening, and not one of competition, because as they say, this is what brings the country forward.

Article based on article written by György Feke