God became man in order to share man's nature and destiny, and so that through the death and resurrection of the saviour He could start with us afresh. The question is: what have we made out of this?" says Bishop István Szabó.  We spoke with the ministerial president of the Synod about the meaning of Christmas, the image of the Messiah in the time of Jesus, as well as how God makes and fulfils promises.

According to our Christian faith, God became man on the first Christmas. To what degree was this a novel idea back in that time?

It depends on how we look at it. In and of itself, the idea of God – to use a subtle theological term – becoming incarnate would not have been a new idea in the ancient world, since the tales of the gods from Greek mythology are all about how the gods of Olympus could take whatever form they pleased, whenever they pleased, and involve themselves in human affairs. On top of that, the world at that time was full of pantheons, statues, images and depictions of gods. Therefore, the good news of the gospel that God had become flesh and walked amongst us would not have been surprising offhand. What was much more surprising is why He did this.

God became man in order to share man's destiny. This was not done for simple dramatic or demonstrative purposes, or out of some divine experiment, or some plan "to show what God is capable of", but because he was fully throwing in his lot with mankind, since he even "tasted" death for our sake (Hebrews 2:9). This is the novelty of the message of Christmas, or if I may say so, what made it baffling and revolutionary, since pagan gods that take corporal form were regarded as immortal, and in fact not even knowing suffering as such. In contrast with this, Christianity – nourished from roots in the Old Testament – proclaims that God the Creator, superior to all things for all eternity, has become part of the human world. As Paul the Apostle wrote to both the Romans and the Corinthians: Christ is the new Adam, the second Adam arriving amongst us. God is restarting His history with mankind, but not in the sense of stopping everything like a child who has received a toy for Christmas, removes a part from it, and then finding he doesn't like the results, takes the whole thing apart and puts it back together. Instead, God started a new history with humankind through the death and resurrection of the Saviour.

What can people get out of this new idea?

This new idea contains everything. We can make something out of the individual parts: with our birth, our personal growth, and everything that fits into 70, 80 or 100 years, and to some degree can even make something out of our death. But what are we to do with the everything? What do we do with the fact that in Christ, God took bodily form in order to free man's life from death for eternity through the resurrection? But let me ask the question another way: what does God want to do with us? This is the innermost core of the great message of Christianity: that when Christ took human form, God really was starting something new with mankind. But will people devote themselves to this divine work and entrust themselves to God? Will we reconcile with him and take up a holy and divine way of life or not? These are great questions that transcend simple ideas. 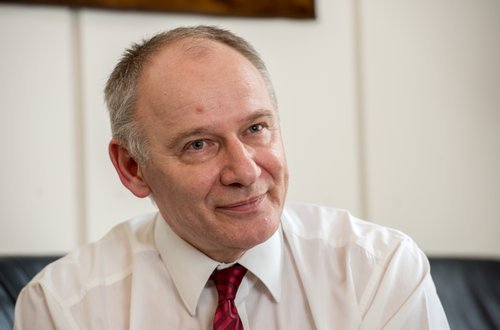 In that era and environment, how unexpected was the birth of Jesus?

Generally speaking, they didn't know how to react, because their expectations regarding the Messiah were different. They were expecting a Messiah; that's what we celebrate at Christmas and sing in our Christmas carols: what God had promised to the holy patriarchs, what he had prefigured in the rituals and in the life during the time of the Old Testament, what the prophets repeated again and again in many different ways: all of these God in the fullness of time made reality in the form of Jesus Christ.

What kind of Messiah were the Jews waiting for?

When the teachings of Jesus reached the imprisoned John the Baptist, along with news of the the miracles and acts of salvation performed by him, John sent Jesus a message asking him, “Are you the one who is to come, or should we expect someone else?" (Luke 7:19) The title "adventus" is Messianic in nature, pertaining to the one who must come. John the Baptist's question encompasses a great deal: everything from amazement to disappointment. John had been preaching that the one who would be coming would have a pitchfork in his hands to clean out the Lord's barnyard (Luke 3:17), thereby bringing order, the good and divine order: the fulfilment of the blessings that God promised to Abraham, which the entire world would inherit through him and his descendants. These expectations gave rise to mundane and earthly ideas that historical figures would bring the solution: there would come a Messiah-king, a liberator, a great lawmaker or a holy and perfect high priest, who would restore the rituals of worship and liberate his people, and in this way the entire world would be overflown by God's blessings. In contrast to this, John the Baptist saw that not only was Jesus not going to put his axe to the roots of the trees to cut down those that bore no fruit (Luke 3:9), he also dubbed him "the friend of sinners" (Luke 7:34). This was incomprehensible to him.

At the same time, the first Christians were born Jews.

We might think about the debate between Paul and the other apostles: how far does the good news of salvation extend? What way of life does it entail? Does anyone who turns to the Lord Jesus become a Jew, or do they cease to be Jews? Must the rituals of the Old Testament be observed? From the Acts of the Apostles, we know these issues were settled quite quickly, but behind the succinctness of the prose there lies a huge dilemma we must consider. The Apostle Paul writes about this very beautifully and profoundly in his letter to the Romans: has the Lord revoked the promises He had made to the patriarchs and abandoned His people? No. God has brought about the great message, hidden in history, that in Christ there is no barbarian, no Greek, no Jew, no man and no woman (Galicians 3:28). The salvation and redemption of Christ and the divine work transcend these human and historical attributes and definitions.

This is the message of Christmas? This is what God promised us with the birth of Jesus?

He not only promised it, he also fulfilled the promise, since through the resurrection and the work of salvation – which Paul describes as a work of "satisfaction" or "atonement", John the Apostle as a work of divine solidarity, one of paternal love, James as the absolute restoration of a divine and perfect way of life, the Apostle Peter as the overture to a great resolution of world history – all these things were endorsed by God in the resurrection. The reason Christ became human was in order to share man's mortal fate, and the reason He died was in order to be resurrected. And His resurrection, as Paul writes, is proof of his pledge that there is resurrection of the dead. Meaning that by fulfilling one promise, God also made another one. This is His way.

Read the second part of the interview with Bishop Istávn Szabó here.