On 18 and 19 November, members of RCH Synod met for the second ordianry session since the New Synod was constituted in April 2015. The new General Secretary was elected. Mission co-workers represented the RCH partner churches.

The Synod elected András László Gér as General Secretary. With this election, the Synod confirmed the decision of the Presidium according to which he has been acting as interim General Secretary as of 1st July; the directors of national institutions of the Synod have also been elected for the upcoming 6-year term.

András László Gér (28) holds a Bachelor’s degree in History and a Master’s degree in Theology from the Károli Gáspár University of the Reformed Church, and a History of Religion Master’s degree from the Pázmány Péter Catholic University where he has been a PhD Student from 2011 specializing in Hebrew and Judaic Studies. He has followed Postgraduate specialization program as Foreign Affairs Adviser since 2012 at the Facuty of Law of the Károli Gáspár University. Before his appointment Gér has been working as a senior political advisor to the Minister of Human Resources, Zoltán Balog in the field of church and civil society politics.

The opening worship at this year’s Synod was led by Very Rev. Ivan Patterson former Moderator of the Presbyterian Church in Ireland, who has been living and serving in Budapest over the last three months in order to strengthen the Northen-Irish-Hungarian connection and has served as a lecturer at the Theological Faculty of the Károli Gáspár Reformed University. 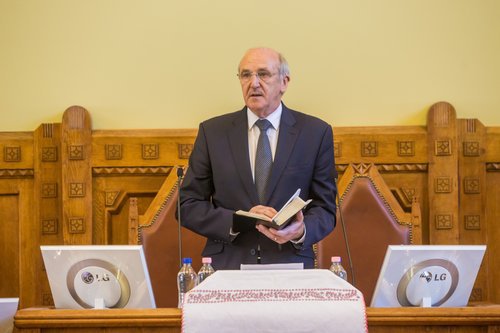 Very Rev. Patterson’s scriptural reflection revolved around the notion that Jesus is The Word made flesh, dwelling among us. ”All of this brings such implications for us as we minister in our day and place. The Word, God, becoming flesh again and again, in and through us,” mused Rev. Patterson. ”Today we are privileged to be called to be part of that continuing story of Incarnation, of Good News, of God’s love, of forgiveness and new life, of God’s purpose for humankind, even creation itself.”

In his opening Speech, Bishop István Szabó, Ministerial President of the Synod spoke of the current crisis by saying that we are experiencing hard times while setting out for our tasks – sometimes we even feel that we don’t live up to our responsibilities if we don’t deal with them exclusively. Today, we are surrounded by the migrant crisis, persecution of Christians, terrorist attacks and an almost warlike situation. Still, according to the Scripture, we have to care about our household as well. 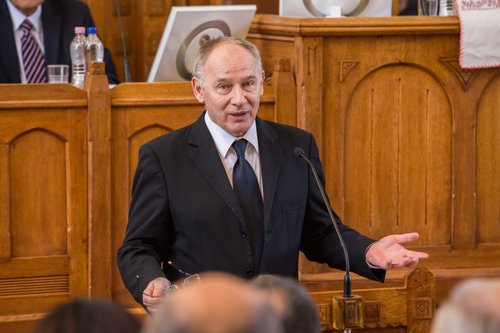 As for the migration crisis, the Presidium of the General Convent has published an unanimously approved statement – which preceded the urge and rightful demand that our Synod should give orientation– responding to the request of the bishops and chief elders outside the borders of Hungary. They also asked us to publish materials about the issue frequently, because if we only have the media as a source of information, we can easily go astray.

Bishop Szabó is thankful for those who stood on the gap in the summer during the summer influx. We have to be prepared for new kinds of ministries – the signs show that the traditional ministry refugee integration will be suspended for a while, and new dimensions should be opened.

The bishop also highlighted the importance of raising our voice against the persecution of Christians and remembering our own refugees in wartime Subcarpathia and in Transylvania, where restitution is obstructed. We still have to pray for the case of Székely Mikó High School. In Slovakia we are concerned about Hungarian language education and we have to take care of the Hungarian communities in the Diaspora.

Parts of the agenda were the upcoming Jubilees and the Memorial Year of Gulag, as well as the report on the Starpoint Reformed Youth Festival.

2016 is going to mark the 450th anniversary of the Second Helvetic Confession. The new translation of the Confession is going to be published for the Jubilee. Protestant churches around the world are also preparing to celebrate the 500th anniversary of the Reformation in 2017. Many things are in the works for this important celebration, especially the same year marks the 450th anniversary of the establishment of the Hungarian Reformed Church (HRC). Among other programs of the RCH, the city of Debrecen will take part in two international ecumenical programs that will offer various opportunities and activities to learn about the history of this important city, where the first General Synod of HRC took place in 1567.

Hungary, this year, commemorated the estimated 800,000 civilians and soldiers taken away 70 years ago to the Gulag, the forced-labor camps of the Soviet Union. The Hungarian Government set up a committee to coordinate the events related to the Memorial Year of Gulag in 2015. Joining this commemoration, as part of its 7 years Process on Reconciliation in Church and Society, the Synod plans to support research and organize thematic conferences on experiences of Hungarian Reformed people during this trying time under the coordination of the newly-appointed committee.

The Starpoint Reformed Youth Festival also took place this year, and the Synod heard a report on its great success. The international festival is organized by the RCH every second year to bring together the youth of the RCH, as well as a selection of Reformed youth from abroad, including those from partner churches. This year, Starpoint saw 2,500 Reformed Christian youth from all over the world gather in Tata, Hungary, the third week of July.

This year saw many important developments for the Reformed Church in Hungary come to pass. Not only was this Synod a way to celebrate all that has happened, but it was also a way to recognize the partnerships that the RCH has around that world. 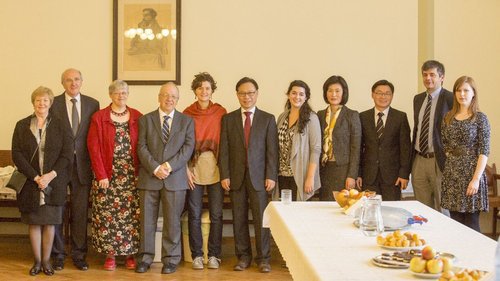