The meeting was organized for the initiative of the members of the Protestant Roma Mission Forum with the participation of the Reformed, Lutheran, Pentecostal, Baptist and Methodist Roma mission communities. The theme of the day was, “Therefore go and make disciples of all nations,”  which urged the Roma and non-Roma brothers and sisters to serve with. The day-long conference was filled with worship songs and testimonies. The Roma missions of the different churches were also introduced, which according to Ágnes Nyeső, National Roma mission coordinator of RCH, was a great opportunity for taking care of the relationships and for living out our unity.

God makes the first from the last

“Service requires sacrifice, but for us, the only way to be true followers of Jesus Christ is to make sacrifice,” said Péter Bakay, Lutheran pastor, Roma mission coordinator. He thinks that it is not a wasted time to serve the Lord, but rather it is the beginning of an adventurous game which makes our life complete. That is why Péter Bakay encouraged everyone to serve in order to not “let our life anymore be just idling” The Roma mission leader said that nowadays the Romas are not a front-running group in society, but God always transforms the last to the first, so he will put the Romas to the first place. He emphasized that, for the Hungarian and European society, the Roma community is a great investment because God has made a bet on them. 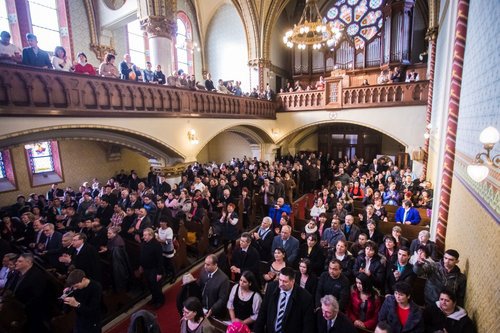 Confirming the worlds of Péter Bakay, Károly Czibere, the Minister of State for Social Affairs and Inclusion, added that, “Hungarian society needs fraternal communities, such as the Roma’s.” Czibere gave a prominent role to the Churches in the community-building and expressed his gratitude that different denominations take a stand for Romas. The Minister of State highlighted the importance of missionary service and also addressed a message to the people who work in this mission: firstly, he said, find an individual life-purpose, then find purpose in their mission and finally find purpose in the whole society. “The walls will be destroyed between the major society and the Romas when they have fallen down in every heart,” he added. The thickest walls are in the human hearts, and the missionaries who are able to destroy them are those who can shake up the people. 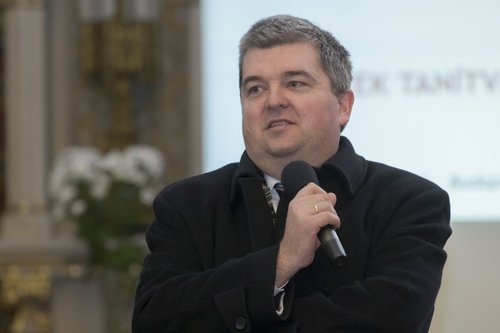 Light up Europe with the fire of God

“We are responsible for the society, for the Roma and non-Roma brothers and sisters,” said László Surman, pastor of the Roma Mission of the Hungarian Pentecostal Church. The pastor read the story of the burning bush from Exodus. God knows and calls everyone by their names, like he did with Moses. He sees what we do, what we think, the way we treat our brothers and sisters, and he is the one who never leaves his sons alone. According to László Surman, there are two types of fires: the first is the fire of the world, which symbolizes our wishes and desires, but this fire separates us from God. The second one is the fire which gives life; when the fire of God starts to burn in ourselves. This fills us with hope which helps us to burn brightly in other people’s lives. “Let us not search for excuses, do what God tells us: we make disciples of all nations. We are the ones who should effect on the world. Light up Europe with the flame/fire of God,” Surman says.

There is no ‘lone wolf’ Christianity

“We have to realize in our service who Christ is,” stressed Eszter Dani, the head of the RCH Mission Office . “Jesus comes to forgive us; he is the one who has a plan with us. We have  to be opened, like Peter, who let Jesus preach on his boat.  Let us be open as much as Peter was, because the Spirit of God gifts us, and our nets will become full too,” said Dani during her speech based on the story of the fishermen of Galilee. 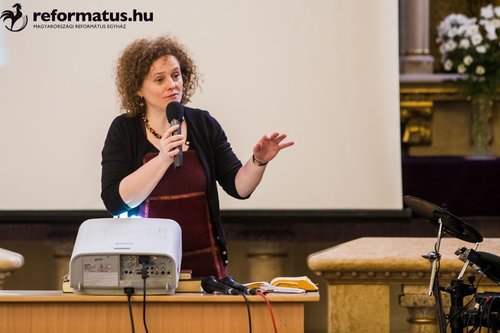 András Csepregi, Bible class teacher of the Lutheran-Evangelical High School of Budapest-Fasor, highlighted in his salutatory that, “For the Spirit God gave us does not make us timid, (2Tim 1,7).’ If someone is under the control of fear, they make bad decisions. For instance, Adam and Eve didn’t trust in God because of their fear. Peter denied Jesus through fear and fear produces negative fruits in the society. God gives us the spirit of self-discipline. In our service we have to turn with the spirit of self-discipline and love to the Romas, because they are loved by God too.”

“There is no “lone wolf” Christianity. We as human beings could be easily inflated in our service, however it is not an individual but a community interest. We only do our best in our service if we lean on God with studious godliness. We have to find ourselves in the service as living stones, leaving all the evilness, jealousy and hypocrisy behind,” added Eszter Dani.

Serve with a pure and reconciled heart

Salutations and sermons were followed by testimonies from people of the different churches. Eszter Koncz, a reformed religious education teacher, shared the story of her adoption. She wasn’t raised in a Roma family so she experienced the rejection ever since her younger years. She found herself after her conversion and she says that Jesus helped her to accept herself as she is. That was a turning point in her life, because she used to look upon Roma society with disfavour, but now she realized that her duty is to go back to serve among her people .She stressed, that we can serve just with a pure and reconciled heart. 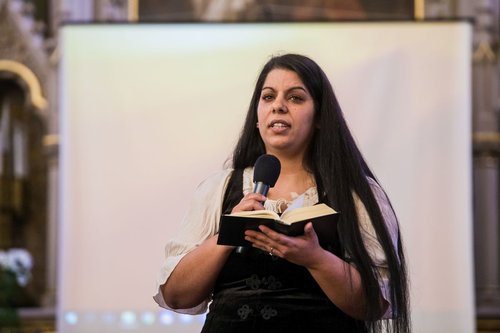 Among the people sharing their testimonies, many of them said no to drugs, alcohol or turned into a ‘good mother’ from a ‘bad mother’ because of God’s words. The Roma believer brothers and sisters gave special attention to the importance of praying. They think that we find ourselves the most during prayer, so it is a great opportunity for self-examination.

“Every person is equal in front of God, let us see our fellow human beings equally as well. We have to turn with the love of the Lord to our brothers and sisters, even to the Romas, because God sees the Romas as precious, accepts and raises them,” László Nagy Erdei, Methodist pastor, said in his closing speech. The meeting ended with a common prayer.  in the Hungarian and Roma languages in which they asked God’s blessing for each other and for their peaceful coexistence.

You can see more pictures of the meeting here.