On 15 February in Budapest, the 10th Tamás Dizsrei Church Aid award was presented. During the conference commemorating the Bethesda Children’s Hospital’s founding director, which was held in the Hold Street reformed church, the leader of the Good Samaritan Reformed Children’s Home, László Kató, was recognized.

The main goal of the award, along with the 700,000 Forint cash prize, is to recognize such people or communities who, with the nature of the Bethesda Hospital's director, set an example serving the ill and downtrodden, healing both their soul and body with love. The award was founded10 years ago by the Synod of the Reformed Church in Hungary, the Forum of the German-speaking Protestant Congregation, the Bethesda Hospital Foundation and the Danubian Reformed Church District in commemoration of Tamás Dizseri.

Zoltán Balog, the Minister of Human Resources and reformed theologian, said the following at the award ceremony: the work of church institutions in Hungary only makes sense if they reflect that little bit extra in humanity. The award would like to win recognition for such people or communities, who live according to the extra within them and pass it on. In the minister's opinion, when asked about the Sub-Carpathian reformed community: those people set an example for us in their service regarding Roma, abandoned children and education, who live among much harder circumstances than we do. He added: health care needs external and legal resources to continue functioning well. In the Church, external resources mean the Holy Spirit from which internal strength that enables us to achieve more even while facing hardships can come as well. 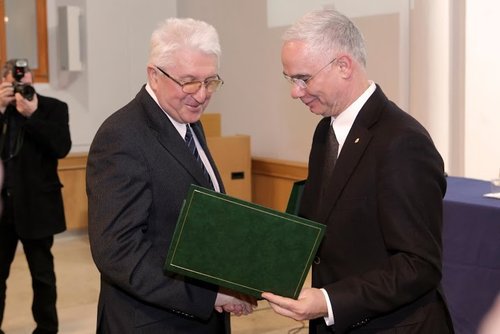 Not a triumph, but a gift

István Bogárdi Szabó, bishop of the Danubian Church District also spoke about this little bit extra during his devotion on the story of the Canaanite woman. The bishop explained the unusual, offensive dialogue by comparing two of Spurgeon's sermons. The first interpreted the passage as the woman's victory, while according to the second explanation written thirty years later, the woman could not prevail, only receive grace. "There is a huge drama in knowing God and knowing ourselves. When the Canaanite woman admits her own insignificance and begs for the grace of God, she understands it clearly: that is not excess, but extra – a gift," said István Bogárdi Szabó, adding finally: When Jesus answers her, "O woman, great is your faith," then he does not address it as a matter of quantity or achievement, but quality, which can only be seen through faith. If we would like to live as the children of God who received grace, multiply it and pass it on, then we must enshrine the deep message of grace in our hearts: if we receive it, it cannot be earned.

The invention of love

After the devotion, János Bencze the pastor of Bethesda Hospital, announced the 2014 winner László Katkó, head of the Good Samaritan Reformed Children's Home in Velyka Dobron, Ukraine, and presented him with a commemorative plaque depicting the Good Samaritan designed by Milkós Melocco. The prize-winner stated, "God puts everyone in the place where they have a mission to fulfil, but this can only be achieved through prayer and with the help of praying people." The home, led by Katkó, is being built up the same way. – Our work has not always been successful; we had to live through several hardships. I would like to thank everyone who helped us on our way – added László Katkó, outlining the name of a Dutchman, Peiter van Drielt, who with great devotion helped the work of the home from the very beginning, but who passed away at Christmastime last year. He visited psychiatric wards and homes for the handicapped to save those who had not been taken out to fresh air in 25 years, or those unfortunate ones who were born into families, which morally had gone down in the world. 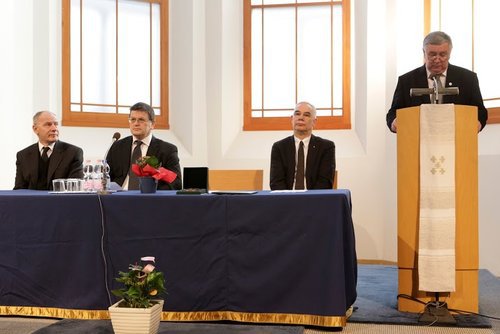 As the bishop of the Transtibiscan church district and presiding bishop of the Synod, Gusztáv Bölcskei put it into words, "The Tamás Dizsweri Church Aid Award is also capable of connecting worlds and areas, which seem to be different from one another. The award winners, both on this and the other side of the border, make up a community in the field of medicine, institutional diaconia, and moral courage. In this community, what they have in common is taking care of Christ's people, practicing devotion and preaching about it, which we can all experience through the grace of Christ.

László Katkó was born in the Soviet Union. In his military service spent in the chemical factory in Ungvár, he was always made to feel that he was not a reliable part of the system. During his work he met socially disadvantaged children, to whom he has felt a special commitment ever since. In 1982 he became an elder, later the chief elder, of the congregation in Szürte. He has been a member of the Synod and Lay President of Ung since 1991. In 1993 he helped start the high school in Nagyberg, then building the Good Samaritan Children's Home started in Velyka Dobron, where in 1995 he was put in charge of an institution lacking drinking water, electricity and heating and which, with Dutch support, wanted to help disabled, abandoned, orphaned girls. Under the guidance of László Katkó, a self-sufficient institution was born in the enthusiastic town with a population of 6,000 Hungarian inhabitants, and where today 70 girls are cared for with the invention of love. 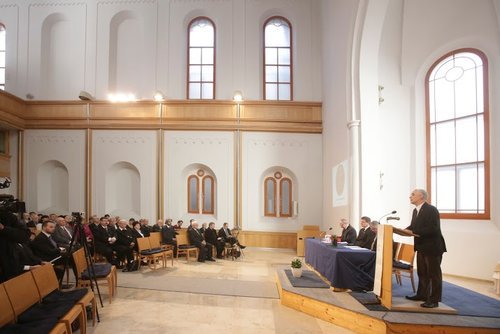 After the award ceremony, László Katkó gave an account of the history and running of the home, which has been functioning since 1996. Today the institution has 70 residents, of whom eight have multiple disabilities, and 39 workers treating them. A bakery, a dentist's office, a pig and cow farm, a bee yard and 10 acres of soil support the home in remaining self-sufficient. Tourists are able to stay in accommodations on the premises, plus events and conferences are held there as well. In August of last year, the House of Care was opened, where 16 adult patients can be placed until they marry – the engagements and weddings were celebrated there like the institute was one big family.

During the conference, Károly Czibere talked about Reformed Church in Hungary's work in child welfare, outlining the network of foster parents, where recently 537 parents brought up 793 children. Psychologist Zsuzsa Bogár, co-worker of the Ágacska Foundation, gave a lecture on the psychology of adoption in which she talked about the most common difficulties regarding adoption and emphasized the importance of giving basic information about it. Károly Czibere also mentioned this thought when he expressed that he finds it sad how few people know about the child welfare works beyond the Hungarian border, and that there has not been a study written examining how the Trianon Treaty affected the child welfare work.