If we cannot make any sacrifices for each other, our Christianity is worth nothing – emphasized Mrs. János Pásztor, who was the president of the Hungarian Reformed Women’s Association for nearly 20 years. Recently, she has resigned her post and is thinking back over the past years with gratitude.

“My grandmother had been very sick when my mother knew that she was pregnant with me. Then, to console her, she told her that she was pregnant. ‘Do you let me offer her to the Lord?’ my grandmother asked my mother. She answered, ‘Offer her, my mother, offer.’ Then, she started to pray for me,” said Mrs. Pásztor, Jutka, about how she first got in touch with the Lord. She says that the Lord leads and takes man. She has gotten in touch with lots of people in the recent decades and she sees today that it was no accident.

At the age of 6, her father – who was one of elders of the Kálvin Square Congregation – sent her to Sunday school. As she was already a schoolgirl, she felt it unjust that she had to study Sunday morning, too. That’s why, after walking around Kálvin Square, she went home. I told my father that the Sunday school was canceled that day. My father knew very well that it was a lie. Next Sunday, he took me there and introduced me to a charming lady. After that, I never missed Sunday school. Hundreds of children attended each week – she remembers, and she tells one more story: I did not have to go to Sunday school after confirmation. Two girls called me to take part in the girl’s club. I told them that I didn’t go because I had a lot to learn and do. They came back two weeks later, and I decided to go with them.

After the political change, four women pastors re-established the National Women’s Association that had been created in 1944. One day Mrs. József Farkas asked Jutka to be the president of Women’s Association. “‘How can I do it?’ I thought, and I accepted it two weeks later. In those times, our office was a shelf at the Kálvin Square church. We did the daily tasks from a kitchen situated in Budafok. I used my husband’s typewriter for work,” she remembers. 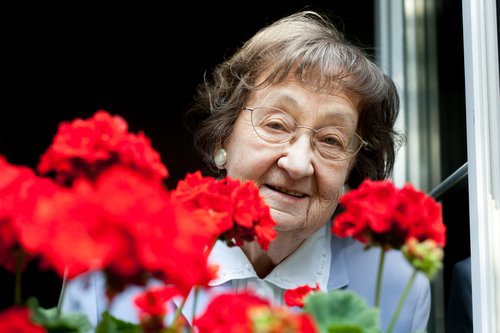 They started to visit the congregations. They organized bible schools and conferences. The presidency in the districts was established. However, they did not have a premise. Zsuzsanna Derencsényi gave them a furnished room in the Schweitzer home. Until now, that was their office. They have just been given a new office at Kálvin Square. “But what a good place! We have furnished it, there is also a carpet. We have found place for everything. I’m waiting for the new Presidency that it takes over the premises,” Jutka told with pleasure. One of her biggest gifts was when the National Girls’ conference was organized in Kálvin Square’s church. “There were only five girls at 9:45 a.m. and the women who helped us. I was at a point where I was ready to go home. However, the church was full at 10 a.m.”

The girls were listening to us in silence. We were happy.

In one of the congregations, Jutka says that following Jesus Christ is a privilege and gift. An old lady came to her and said: Klára Zsindely-Tüdős came to their place 60 years earlier and she had invited them to follow, and since then she has been following him. “I feel it was worth each path done and difficulty. Today, regrettably, I dare say that the Women’s Association has become old. The members are rather the older women in the congregations; really, only a few young women join the association. In general they cite the work and the education of children as reasons. I cherish the hope that the new direction will find the way leading to the youth. The pastors play an important role and they should not be afraid of women,” says Jutka. She thinks that she has been less active lately. I have resigned the director’s post. Nearly twenty years, it is not a short time. There are some young people who are happy to do it.

The Women’s Association is always joined to the congregation and they help where it is necessary. “In one of the congregations, they wanted to establish the women association,” remembers Jutka. The pastor phoned me and told me not to come because the organization of a women association is not necessary to make cakes, tidy the church or collect the offering. I had the opposite opinion. Finally, the women managed to establish the women’s association. They invited me and I talked to the pastor about the importance of a praying community next to him, a community whose members visit the sick people, the poor and they told the pastor where the help is necessary. For a pastor, it is important to be surrounded by people who are praying for him, for the church services, for the congregation.

The Women’s Association has initiated two Prayer days, too. One of them is held each year in December influenced by the Prayer Day of the Carpathian Basin of 5 December 2004, the other one is the World Day of Prayer in Hungarian organization. “Warm thanks for the Reformátusok Lapja for writing articles about these events. When we started to hold the World Day of Prayer, the program had been made by an Asian country. Once, I was giving a lecture for the women when one of them stood up and asked me why we were not praying for the Hungarians. I answered her that we must pray for the Hungarians every day, but we can pray for Christians living in other countries once a year. After that, there was silence.” 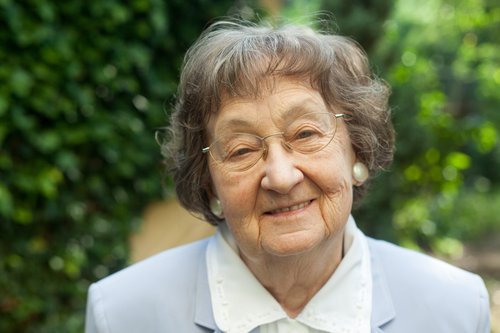 “The most important thing for me, that I know the Lord loves me. I believe that he is with me, when I am healthy or sick. The last time when I was sick, I felt that the better medication is love. My children were looking after me continually, my neighbour and my whole family were praying for me, too. The members in the Women’s Association were also very kind. They have a lot of tenderness in them,” Jutka said, thinking back to the past weeks. She is member in the Gazdagrét’s congregation, going there to attend the church services. On Pentecost Monday afternoon, the pastor visited her and he brought me Communion, too. “He sat down next to me, took my hand and he prayed. This was an enormous gift for me.”

Diacona is realized at the congregational level. In the past years, they have organized district women’s conferences, too. They talked about how to help sick people, the elderly and the mothers in the congregations. In 2010, Klára Zsindelyn-Tüdős Prize was created and it is given for those, who accomplished their service in the congregation seriously. “Following Christ doesn’t mean that some people have to be canonized, but that there are lot of people who set a good example for us. I am so glad that there were and are many women who live seriously in love of Christ,” emphasized Jutka. She finds it important that the women’s association of the congregations visit and know each other.

What does she give the most thanks for in the past twenty years? “I could act. The Lord let me serve him,” says Mrs. János Pásztor, Jutka.

Mrs. János Pásztor was awarded the Klára Zsindely-Tüdős Prize in 2013.

Mrs. János-Pásztor lived in Szentendre with her pastor husband from 1952 to 1970. Then, she served in Kenya until 1976. She was in service at Debrecen from 1976 and in Budafok from 1988. “We experienced lots of things and we had many difficulties. We had such a rich life, although we often had financial problems, too,” she remembers. She has participated in the girl's conferences in Tahiti since 1947. Then, she became a member of the Hungarian Reformed Women’s Association in 1991 and president in 1996. She resigned her post this year. She has two books published: Kenya’s diary and the other one about Mrs. Miklós Matolcsy.