The Ecumenical Council of Churches in Hungary (ECCH) welcomed the General Secretary of the World Council of Churches (WCC), Rev. Dr. Olav Tveit, to Budapest this week where he met with several church and political leaders, including Prime Minister Viktor Orbán.

The General Secretary was in Hungary from 8 to 10 April, where he met with a number of state officials, Zoltán Balog, minister for Human Resources, Zsolt Semjén, deputy prime minister, Zsolt Németh, state secretary for Parliamentary Affairs of the Ministry of Foreign Affairs, György Hölvényi, state secretary for the Church, Civil Society and Nationality Affairs of the Ministry of Human Resources, János Latorcai, vice president of the Parliament, and Péter Harrach, a leader of the Christian Democratic Party, among others.

During his visit he was also greeted by several church leaders, including Péter Gáncs presiding bishop of the Hungarian Lutheran Church, János Papp president of the Hungarian Baptist Church, István Csernák superintendent of the United Methodist Church in Hungary, Gusztáv Bölcskei presiding bishop of the Reformed Church in Hungary and Cardinal Peter Erdő, Roman Catholic primate of Hungary and archbishop of Esztergom-Budapest. 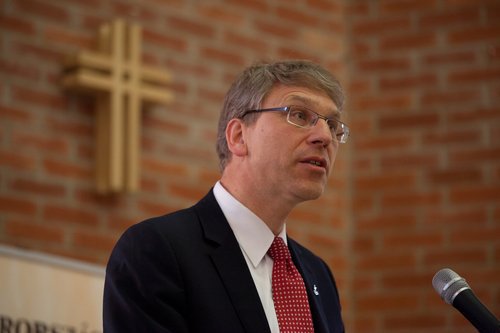 On Tuesday, Rev. Tveit presented a lecture at the ECCH's Ecumenical Center in Budapest on the challenges and opportunities of the ecumenical movement today as well as the struggle for, unity and solidarity among churches in a changing European and global setting. He began by describing changes in the last few decades that affected not only Hungary but the entirety of Europe. Throughout history, he said, no matter how desolate the circumstances, remembering the one who came to save the world on the cross continually strengthened Christians' hope. Now, Christians are called to be witnesses of this hope, and the church as a community of believers serves as an inspiration to overcome trying times. "...no church can fully be church alone. Churches need to make themselves accountable to other churches in one multilateral fellowship that anticipates the unity in the one body of Christ," Tveit said.

He discussed the theme of the 2013 WCC Assembly in Busan, South Korea, which will define the fabric of the next eight years for the WCC: God of life, lead us to justice and peace. "It calls us to discern in the midst of our changing contexts and histories the God who gives and sustains life, the God of life who wants justice and peace to reign so that all may have life in fullness," he said. 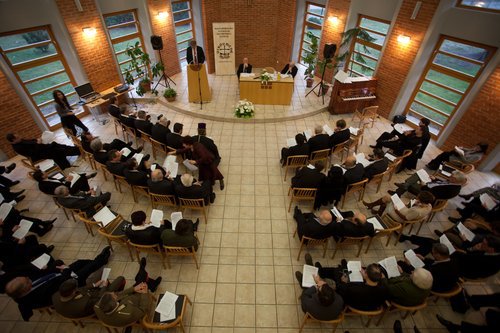 The main focus of Tveit's lecture, however, focused on geopolitical and economic challenges, changing interreligious and ecclesial landscapes and the role of information technologies and modern media. In the first area, he discussed the reality of a globalized world for international organizations like the WCC. It is a setting "which is in dire needs of common values and priorities which flow from the combined emphasis on human rights, solidarity with the poor and marginalized, and mutual accountability as state and non-state actors."

The second challenge of changing interreligious relations showed that the increased globalization has often provoked tensions between religious groups. Because of this, the WCC has been changing the way it approaches interreligious communication. "I want you to know that I am committed to strengthen the interreligious profile and capacity of the WCC and I count on your cooperation and support to achieve this goal," Tveit said. As for the shifting ecclesial landscape, he explained that the WCC and Global Christian Forum (GCF) are working together in a complementary capacity, exploring new ecumenical approaches. The GCF, which was initiated by the WCC in 1998, serves as a gathering-place to cultivate new relationships between Orthodox, Catholics, Anglicans, Protestants, Evangelicals and Pentecostals. 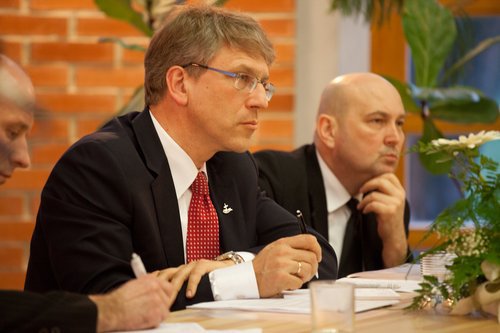 Finally, he commented on the opportunities opening up due to the increased use of information technologies and mainly focused on the current challenge for the WCC in harnessing and utilizing these advantages to further the ecumenical fellowship between member churches.

Tveit concluded that although we face several challenges in an evolving society, the journey is not over and we will continue to journey together following Jesus as His disciples. He ended with these words, "I hear all these expectations and the hope that they will be heard and responded to by the fellowship of churches that gathers as the WCC. Despite all difficulties and challenges, this is what shows me that the WCC is needed also today and has a mission for the future."