“There is the goodness in the deep of everyone’s value system, but the circumstances determine one’s actions. “ - believes Csaba Burai, who went through hell so that a decade later he can help young people through what he went through. The social worker and case manager of the Drug Rehabilitation Ministry called Reformed Thrown Youth Rescue Mission (KIMM) of the Reformed Church in Hungary speaks of his wasted years, the tangible reality of conversion and the everydays of Ráckeresztúr.

Ten years can be a brutally long period of time, especially when one realizes later, how many pointless things were wasted. Csaba Burai agrees with this statement too, from the beginning of his teenage years, he spent exactly one decade under the influence of drugs. He didn’t know his father and his mother died when he was six, so he was raised by his grandfather and his aunt. “I was a good student in the elementary school, but when I became a teenager the troubles followed immediately - in the lack of positive role model, my downfall, was almost inevitable.” - remembered Csaba.

Csaba’s life quickly went downhill with him trying harder and harder drugs. In the last years of his drug addiction, he lived as a polytoxicomane, or in his words “omnivorous”, and constantly engaged in conflict with the police. “My teenage years fell at the end of the nineties. Then there was great freedom in the country - and I very much got the taste for it.” - he said. “All of this mixed with the “good” quality drugs and my broken childhood created a very dangerous mixture, many times we were stoned on gaming machines for days at a time. I did a lot to make the devil smile. And those who were speaking about God to me, I chased away from me with rude words. I was staggering with 55 kilograms to the pharmacy for needle. I had no more place in my arm to inject the stuff, so I stuck it in my neck.” - evoked the most bitter moments of his life. 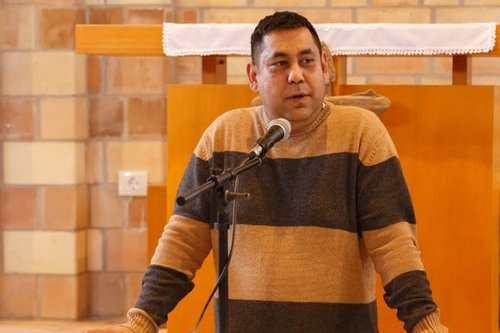 The boy, who once played also with the idea of being a lawyer, arrived to his nadir, when he attempted to commit suicide twice, as day came after day when he had nothing to eat. All of this was after he spent forints of hundred thousands for gaming machines, then was beaten half-dead by the security guards of the nightclub. Despite all of this, Csaba still feels that he needed to live through these in order to find God’s way, on which he made the first steps with the help of a social worker.

“We met in the streets of Budaörs, and she told me she was dreaming of me. I was standing in the middle of a highway, and I was screaming for help.” - recalled the meeting. “Because of my condition I didn’t know whether I was awake, asleep, or hallucinating, so I was going to leave, but she approached me again: “Come with me, I’ll be your mother” - she said. She suffered with me for half a year, gave me food and drink, but one day she came to me and said: » I haven’t asked from you anything yet, but now I’d like you to go to rehab.«” 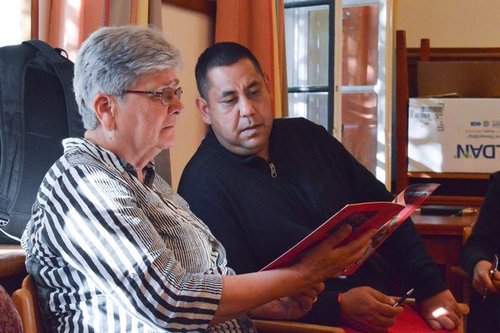 The woman knew well the work in Ráckeresztúr, which started in 1986: The Drug Rehabilitation Ministry called the Reformed Thrown Youth Rescue Mission of RCH started to help drug-addicted young people in a farmhouse, with the leadership of Rev. Eszter Erdős Victorné. But during this bit more than a thirty year long period it has gone through significant changes regarding the infrastructure, and as well as in relation to professional program - today pastors, social workers, psychologists, addictologists, doctors, teachers and art therapists work together in a place that meets all the needs, on biblical foundation in order to make the arrivals experience real salvation.

But for Csaba it was no more than a great opportunity for recreation in Ráckeresztúr: “Since that woman helped me, in her respect I decided to go, have a rest and sleep myself out, then continue. On the 22th of August, 2005, when I stepped through the building’s doorstep, I became immediately suspicious, I thought I was part of an experiment.” Although Csaba described his ten years prior to that as hellish, in the first month the symptoms of withdrawal knocked him down, and only then he started to feel better - at least physically.

“I’ve silently sat through the church services, I didn’t care at all what faith meant, I wanted them to stop bothering me with Jesus.” - he explained. “Of course we have already got a Bible right in the beginning, but I haven’t opened it once, it was laying in the commode next to my bed. However one day I realised: I don’t have parents, I am a low-life criminal, a miserable homeless, since I arrived only with a bag. Everything hit me at once. I started shaking and crying, and looking at the Bible the only thing I could tell was, “If you exist, then help me!” 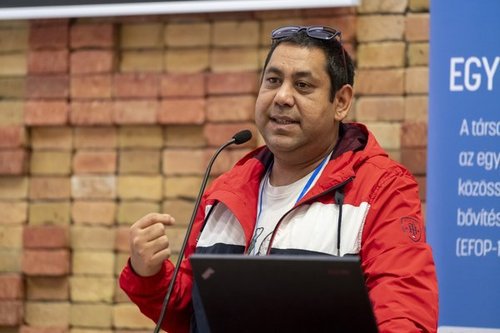 “As I had said it, the window slammed open, and the pages of the Bible started spinning, and stopped by the following part: “Can a mother forget the baby at her breast and have no compassion on the child she has borne? Though she may forget, I will not forget you! See, I have engraved you on the palms of my hands; your walls are ever before me.” (Isaiah 49:15-16). That huge pressure that weighed on me before suddenly disappeared, and my heart was filled with peace - I felt that something happened, and God spoke to me. I believe, that the Lord freed me from my bondages.

Csaba realized then, that God has a plan with his life: “I feel, He was there with me through my whole life, and for me to be here, I had to go through those terrible things. It wasn’t by accident either that that women approached me then on the street. There is the goodness in the deep of everyone’s value system, but the circumstances determine what we’re doing. That’s why we make things sometimes, which are rationally incomprehensible.”

Physically-spiritually strengthened Csaba went through the therapy, finished a two-year-long social worker and nurse training, started to work in the Schweitzer Albert Reformed Rest Home, then joined even the congregational life. “I got many gifts from God, for example I could go volunteering to the Netherlands for a week - later of course it turned out it was not the best idea just coming out from the rehab. But back home I met Emese Závodi, the leader of the Voluntary Diaconal Year Program Office, who offered me to go to Nagydobrony, Subcarpathia, (Ukriane). It was wonderful to get to know Jesus in the rehab, but I got into a real, intimate relationship with him there, where I woke up and went to bed with him every single day.” 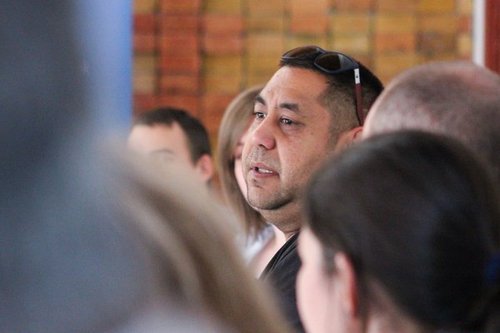 After this Csaba’s next aim was targeted towards Berlin where he worked by a Roma organisation helping homeless people. “While in Subcarpathia I developed in faith, in Berlin rather in culture.” - explained, but after the end of his volunteering year, in 2010, his life reached a turning point. “Without any education I didn’t know what to do with my life. Because of my intolerable behavior I was kicked out of high school after one year, so practically I was standing there with an eighth grade graduation, with my open arms. By all means I wanted to have a helping profession, so I continued high school to graduate, and also I could look into the fields of social care in different places: I worked with autistics, handicapped and disabled people too. While working I could finish a degree as a social worker in the Budapest University of Jewish Studies.” - he said.

Not so long after his graduation opened the Tinirehab (“Teenrehab”), that is the Youth Home of Drug Therapy, and Zoltán Zénó Orsolics, the professional leader, didn’t hesitate to encourage Csaba to send in his CV - he himself got clean in Ráckeresztúr, and for drug users, you couldn’t find better role models than those who have gone through the path to recovery themselves. Csaba has been helping the young people who are coming to the rehab for four years by now, and during this time he became more confident about being alone, without God’s help, the gained knowledge wouldn’t be any worth. 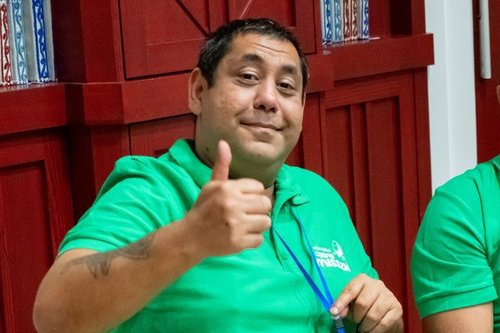 “In the course of the therapy such situations can appear, where the people are already helpless - but God can never be that.” - he says. “Where the professionalism ends, then the liberating grace works on, when the colleagues had yet nothing more to say by themselves, God gives the words into their mouths. Our job is, that representing Him we give a framework to the therapy with the correct value system. The Lord sheds the seeds in the soul of the ones in the rehab too, and it depends on Him when do they hatch?”

In Csaba’s opinion the milieu in Rákoskeresztúr is a bit like a miniature society, where things are shown to the residents, that are completely regular for normal people. “We go to the theatre, to the cinema, to hike, and so on. Through these they realize that life is more than waking up, getting stoned, or just sitting in front of the computer the whole day, or maybe going out. When they come in, it's a bit like their eyes were foggy, so they couldn't see details of life. This can be removed by God during the therapy: first He makes them realize what they’ve done, then He presents everyone with a new life.” 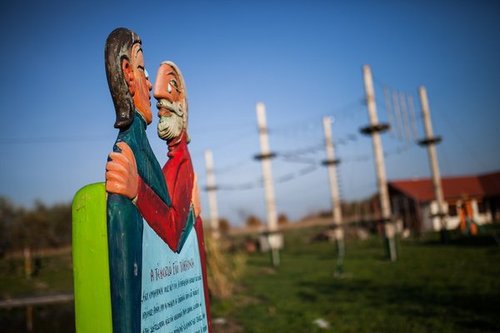 Although he could tackle the obstacles successfully after the therapy, there are young people who start using drugs after the rehab again. “There are setbacks, but for them just having started on this path is already a huge step.” - thinks Csaba. “Then, when I was there and saw a man who used heroin for ten years came in with his family I thought: if he succeeded, then I will too. As coworkers, we have to lead with the same example, showing hope to these guys, because when there is no hope, the whole thing will lose its meaning. We can only represent what Jesus has taught us: You’ve made a mistake? It’s alright. Let’s have a fresh start! It is hopeful for us. The point is not that we fall, but that we can stand up again with God’s Words.”