A woman stabbed in the back by her own husband. Another who asked for an EKG exam just to have something happen to her. A third who has had more than 40 abortions. A little boy whose eye was shot, but who tells lies about it claiming it was an accident. In only a few minutes, volunteers of the “A way toward life” program – doctors and nurses of the Bethesda Hospital and co-workers of the Reformed Mission Centre – experienced these fragments of lives during their mission, when they examined more than 1,000 people in 14 disadvantaged towns within the framework of a free check-up program.

Will I still find him alive?

Rita Jakus, a neurologist from Bethesda Hospital, lists shocking stories when asked about the experience she has gained from the program. During medical examinations, the doctor has seen people in life situations that are simply unimaginable for a middle class city dweller.

- I always ask the women about the number of children and pregnancies separately, because most of the time the two numbers do not match. A woman around the age of 45 had more than 40 abortions, and this is not uncommon here. Many visit the medical check-ups just to have somebody listen to them. This was the case with that middle-aged, obviously alcoholic, woman who brought her 80-year-old mother with her in addition to an epileptic daughter. She is worn away between them, alone, and cannot bear her life other than drinking, but she denies that. She was so grateful to have someone listen to her, and after a short while she came back carrying a kilogram of walnuts. I simply could not refuse, even though I know what a sacrifice it meant her. She wanted to give us something as well. I will never forget about that thirty-year old man either, who must have head a serious muscular disorder but he was still walking around actively. We could not make him undress himself, because he felt so ashamed of being dirty. If I return there a year from now, I don’t know if I will still find him alive. I will also remember that one-eyed little boy, who claims that his accident happened while playing in the reeds. Later I found out from another child that his own brother shot him in the eye, and the story with the reeds is nothing but a lie. 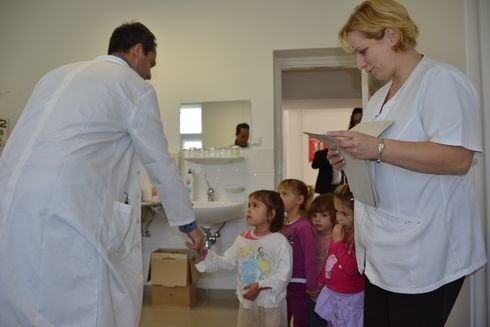 Rita Jakus shares with us, that one day is not much in somebody’s life, but she is motivated through hope to return to these poor villages every year.

- I hope that by being here we can one day start something in them, might change their lives, and give them faith to continue. I believe that this nice and slow progress can be started.

We would be lying to encourage them with a promising future

We learned from Sándor Németh, clinical pastoral care instructor at Bethesda Hospital, that most of the time people do not need to be warned about their high blood-pressure or about smoking and drinking, because they know this well enough themselves. They merely need to have a word with somebody.

- We cannot help them financially, and provide them with a great future, because that would only be an illusion and a lie. But during the 10-15 minutes of the examinations we support a person in a hard situation; we hold his hand and convince him, that he is no less valuable than we are. For a few minutes they are not despised or a person receiving contempt but somebody of worth. Everyone wants to be loved and recognized for being valuable and beloved. We would like to carry this message ourselves. While measuring high blood-pressure, we do not only ask where it hurts or what medicine one takes, we get to know why this person is so anxious and what bothers him. Sometimes we get shocking answers to these questions. One time a woman was telling us the story of the scar on her back, and in the end with the most natural tone she added, that it was her own husband who stabbed her and that is why she had to have an operation. Hearing these stories, we can be even more grateful to God for our lives and really think over if we have any reason to complain. 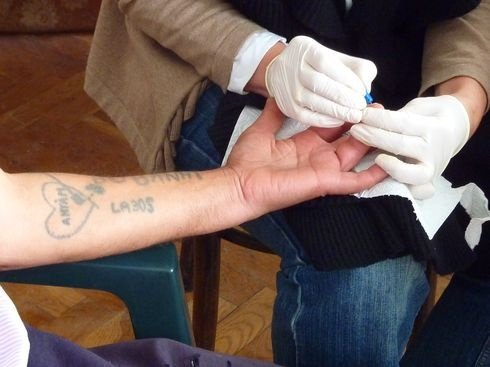 They just wanted to talk to somebody

The Bethesda Hospital’s head nurse confirmed the words of her colleague. According to Horváth Jánosné as well, people really crave a few nice words.

- For me the saddest episode of this year was when an overweight 40-year-old woman came to us, who was so lonely she simply wanted to talk. She was paralyzed from a stroke she had earlier. She asked us to do an EKG for her in order to have something happen to her.

Horváth Józsefné gave us an account of villages where everything was dirty and run-down except a few bigger, richer houses which turned out to belong to the money lenders in the village. It also happened, that some tried to exchange the food and body care packages given by the Mission Centre for cigarettes and alcohol. But at most places the help was warmly welcomed and the packages were used for the purpose in which they were donated. The head nurse also visited villages, which despite being poor were in good condition.

Poverty is not the only problem

Lezákné Enikő Hajdú, pastor of the Ózd congregation told us that when the word about the missionary central check-up was spread more and more people arrived to the temporary doctor’s office set up in the sanctuary.

- By noon we had to stop giving numbers, because there were so many patients waiting for examinations. There is such huge poverty in the Roma settlement next to the church that many of them do not see a doctor at all.

- After the check-ups I talked to many people and encouraged them to undergo further examinations besides following the doctor’s instructions that were given. Sadly, in this area houses without any amenities and poverty are not the only problems. Indeed there are many who appreciate the few thousand forints they earn with public work.  The real problem is rooted in the lifestyle of the majority, because they cannot manage to use sparingly the little they have. These people have to learn and listen to the ones who try to help them – added the pastor in the end. 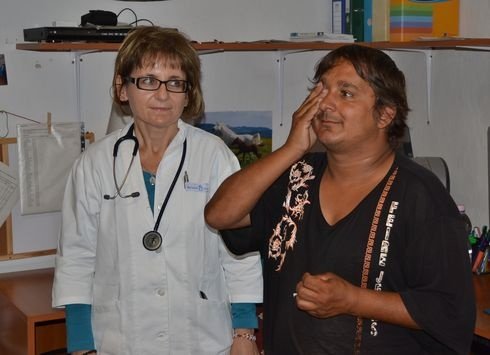 An important result of this year’s "A way toward life" program is that it could reach its real target group, namely those who cannot see a doctor because the nearest one is 50-60 kilometres away – Szabolcs Vida, pastor co-worker of the Reformed Mission Centre informed us.

- For many their health bears no importance, but still they visit our free check-ups. We bring them donations put together from useful items: we distribute food and cleaning supplies among the participants. It’s possible, that for some this is the real motivation to take part, but still the check-ups might save their lives. The case of the 12-year old girl will remain an everlasting lesson for me. She was standing in line for the fourth time, so we wanted to send her away because we thought she is only there for the package. In the end the examination showed a severe heart condition.

This year’s "A way toward life" program in numbers: 1150 people examined in 14 locations, the youngest being 6-weeks, the eldest 87-years-old. The volunteer nurses and doctors examined 60-100 participants a day.

- The check-up can be a kind of exclamation mark for those in decision-making positions in these villages, because it has been proved that these people live deprived of healthcare opportunities, which could mean their survival. At the same time, we can set a good example, because the doctor, assistant or district nurse encouraged by the program can organize similar events too with the help of an enthusiastic congregation. 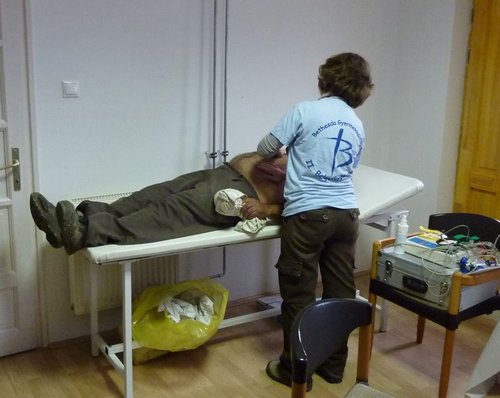 Taking care of themselves

The way to live is more than a check-up program, and it can only be successful through widespread collaboration – the initiator of the program Magyarné Erzsébet Balogh summarized. Regarding the experiences this year, the Mission Centre’s pastor-director has told us: the appearance of children and homeless people was new at the check-ups.

- We look and wait for the guidance of God to see where to go and how to further improve. We have noticed that at the places we visit regularly, many people have started taking care of their health and they inform our doctors about what happened to them in the past year.

And something more: this year’s program could only be achieved through the help of a donation of two million Forints transferred to the Mission Centre’s bank account. The giver did not want to reveal his identity, not even to the co-workers of the centre. Just simply wanted to give.