After nine full days of worship, listening and learning, the 2018 Novi Sad General Assembly of the Conference of European Churches has drawn to a close. Ms. Zsuzsanna Répás of the Hungarian Reformed Church was elected  to the Governing Board of CEC. 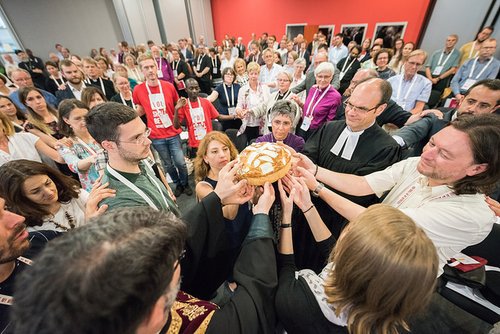 After nine full days of worship, listening and learning, the 2018 Novi Sad General Assembly of the Conference of European Churches has drawn to a close. Those gathered joined in a final sending service, which emphasized the role of Christian hope in the future of Europe.

"By the banks of the Danube in Novi Sad, where bridges were destroyed in conflict and rebuilt in peace, we united in prayer. We brought our thirst for justice; our deep concern for people, our continent and our world. We came to share the Gospel of our Lord Jesus Christ the bringer of healing and peace."- written in the Message of the CEC Assembly in Novi Sad.

Remaining business plenaries approved reports from the finance, strategy and policy, message, and public issues committee. The Assembly also finalised the constitution to bring it into accordance with Belgian law.

Strategic points for the period 2018 to 2023 include developing more regional work, strengthening and expanding partnerships and networks, raising awareness of CEC’s work among its constituency and the wider world, and taking sustainability seriously. Issues for broader, public engagement include economic and climate justice, youth involvement, peacebuilding, human rights, refugees and migration, freedom of religion or belief, populism, and family. Reports from the committees will be made available as they are finalised and translated.

The Assembly elected a new Governing Board and presidency. Rev. Christian Krieger of the Reformed Protestant Church of Alsace and Lorraine was elected president, and as vice-presidents the Rt Rev. Dr Gulnar Francis-Dehqani (Church of England) and Metropolitan Cleopas Strongylis (Ecumenical Patriarchate).Ms Zsuzsanna Répás of the Hungarian Reformed Church was also elected to the Governing Board of CEC.

Ms Zsuzsanna Répás has been member of the Synod of the Reformed Church in Hungary since 2003. She is member of the Ecumenical and Foreign Affairs Committee of the RCH Synod.

Since March 2015 she has been working as the Head of the Department of International and Transborder Hungarian Relation of the Hungarian Academy of Arts.