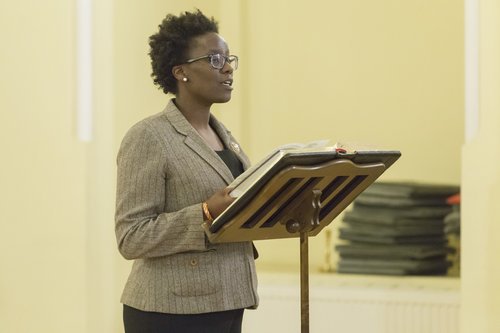 In celebration of the 175th Anniversary of the Scottish Mission in Budapest, the RCH is interviewing various ministers, past and present, to hear the stories about their service at the mission. Today, we chat with Rev. Njeri Wagana Hughes, current Associate Minister at the Mission since 2015, to discuss how the Mission strives to be inclusive, it’s main focus during her ten years of involvement, and what it’s like being a part of an international family of faith.

The Scottish Mission sees itself as “Aiming to follow Jesus and provide a Christian home to the English-speaking community in Budapest by praying, studying and serving.”

Being a church Faith of course is the core of the Mission, but insuring that Christ crucified, died and buried is preached the one who welcomed all, the one who included all, especially the marginalised, the one who was engaged in social justice despite race, and creed.

In this stride, inclusiveness in love is important, through what we do intentionally. Reaching out to the community we are in, i.e. the foreigners in Budapest.

I think love in outreach as something that we can see as part and parcel of the Scottish Mission not only now but in the course of its history.

To begin with it began as a place of faith, reaching out to the Scots for worship and to the Jewish community. We later see how the church contributed to the Bethesda Children’s hospital, building of the Lutheran Church on Castle Hill, starting of the German Speaking Reformed Church, as part of its acts of love. And off course we cannot forget the role the Mission played in teaching girls, and later in protecting Jews.

I do not know much about the communist times, but after the fall of the Berlin wall, we see that the Mission grew from strength to strength, and now the focus of its Mission of love is revolving around migrants, emigrants or immigrants. The mission is not only providing a faith community for these people, but a place where they feel part of a community.

In the past 10 years with the increase of asylum seekers in Hungary, the Mission has seen its outreach change both in kind and monetarily.

I feel inclusion as Christ does, is the main focus, the statement we have on Facebook, (From Elder Ordination, Baptismal and Confirmation Liturgy) summarises it well.

With its long history of reaching out to “the other” and those on the fringes of society, how do you experience the Scottish Mission providing refuge to people during your service?

From July 2013 to August 2014 I was a Ministerial Volunteer with the Transylvanian Reformed Congregation in Budapest and then I began working again as the Associate Minister at the Mission in September 2014 to date.

As mentioned above, in the past 10 years with the increase of asylum seekers in Hungary, the Mission has seen its outreach change both in kind and monetarily.

I have also seen it as a place where many have found a home away from home in their stay in Budapest, despite nationality, race, gender or creed.

Given that St. Columba’s is in a unique position, simultaneously being a part of both the Church of Scotland as well as the Reformed Church in Hungary, how do you view the connection between the Scottish Mission and the RCH? Do you see the congregation influencing the Hungarian church? Or vice versa?

The connection is quite strong, let’s begin with the fact that the church has two Ministers, one from the Church of Scotland and the other from the Reformed Church in Hungary is a statement that both churches recognise that the congregation belongs to both churches, and thus a clear connection.

In everyday life, we operate as an English speaking church with Reformed liturgy and teaching whose foundation is Christ Centred and Biblical based, that both churches follow.

Having been brought up Presbyterian (Presbyterian Church of East Africa, a child of the Church of Scotland) I feel at home in the church. Having been trained by the Reformed Church in Hungary, and now as an ordained Minister of the Reformed Church in Hungary, I see how the churches have interacted with each other from upholding services for the Scots during communism, to hosting the church now, and acknowledging it as a congregations in and of itself, and not to forget how the CofS has trained many ministers in Scotland, and how they have influenced the youth General Assembly of the RCH.

In the everyday life of the church as a congregation and the RCH both need to continually ask ourselves, “How do we affect the each other?” And hopefully influence each other in our mission to our congregation(s), community(ies), and church(es).

Serving at St. Columba’s began right after I joined the church. I first began leading a Sunday afternoon Bible study in September 2006, then became an elder of the church in September 2007, and then I joined as ministerial staff in 2011.

I think the various ways I served the church in different periods has influenced my ministry today.

As one serving here, because we are all the family of God, this has taught me that I need to be what Paul told to Timothy in I Timothy 5:1-2 “Do not speak harshly to an older man,[a] but speak to him as to a father, to younger men as brothers, to older women as mothers, to younger women as sisters—with absolute purity.” (NRSV Anglicised) Despite who they are or where they are from.