The Presidium of the General Convent (GC) held its regular meeting in Berehove as part of the solidarity shown to the local reformed church. Almost all the Bishops and Lay Presidents from Hungarian speaking reformed churches from Hungary and the neighboring countries were present.

The Reformed Church in Transcarpathia hosted the business session of the consultative body of the Hungarian Reformed Church (HRC) on March 22nd – 23rd  close to the Hungarian border. Acting leaders of the Hungarian speaking reformed churches from six countries around the Carpathian Basin discussed among others joint plans for the Reformation Jubilee, the common publication of the new Hungarian translation of the Second Helvetic Confession, issues around the preparation of the Starpoint Youth Festival and the joint social project called Bridge of Love where the number of registered participants has already exceeded 5000. Churches shared concerns and challenges that they face in their respective counties. Reports on the preparation of the court process in Strasbourg regarding the re-nationalization Székely Mikó High School and threats to the churches’ unity and integrity in both Croatia and Serbia were on the agenda.

The GC mandated Bishop István Szabó, Ministerial President of the Synod of the Reformed Church in Hungary, to prepare statements on behalf of the member-churches concerning their position about the lawful representation of the Christian Reformed Churches in Serbia and Croatia. The assembly received the activity report of the Alliance of Hungarian Speaking Protestant Congregations in Germany and approved the transfer of the financial support of around 10,000 EUR budgeted for this year. 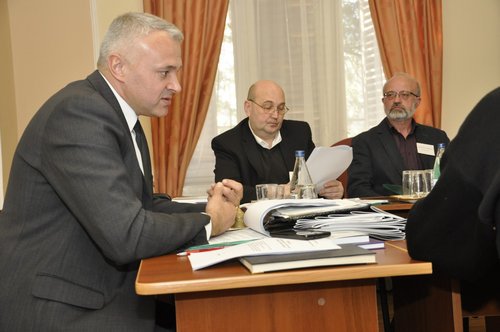 The meeting was twofold, to cover the agenda and also to express solidarity with the reformed community in Transcarpathia and the people of Ukraine. Bishop Sándor Zán Fábián and Lay President Béla Nagy informed members of the Convent about the recent political developments, the consequences of the mobilization and the deteriorating economic situation. They also expressed their gratitude for the manifold support coming from individual congregations and Church Districts of the member churches of HRC and the Hungarian Reformed Church Aid. The Bishop called for special support of active and retired pastors’ families who have been badly hit by the financial hardships, especially those who have more than 3 children. Due to the inflation and situation in general some congregations are not in a position to pay and or increase the payment of the local pastors. Others who are struggling are retired pastors, who out of historic reasons have no social security and whose main income was their pension from the church that has reduced as well. 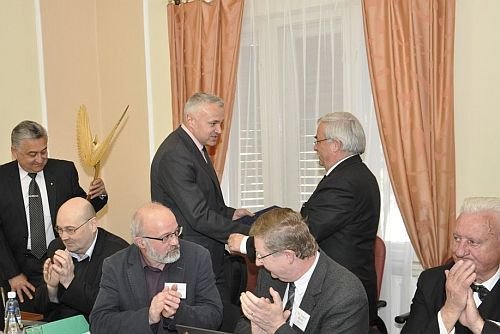 Béla Kató, Bishop of the Transsylvanian Reformed Church District (right), was honored by the Presidium of the RCT for the support of his Church for Sub-Carpathia in 2014

Church leaderships of the Districts decided to call their pastors for a renewed commitment to the Pastors’ Aid Fund which was set up by the General Convent, that was inspired by the German “Partnerhilfe”, encouraging pastors in the Carpathian Basin to support their colleagues in need. Individual pastors are invited to offer part of their income towards this aim. The participants also decided to launch a new donation campaign for RCT. At the end of the session, János Héder, Deputy Bishop of the RCT reported about the solidarity visit organized by WCC in Kiev on 18th of March.