In celebration of the 175th Anniversary of the Scottish Mission in Budapest, the RCH talks with Rev Dr. Ottó Pecsuk, former Associate Minister at the Mission, to hear about his time in the congregation. Rev Dr. Pecsuk was the Associate Minister at the Mission from 2005 until 2009, a time when reaching out to those on the fringes of society was vital.

In celebration of the 175th Anniversary of the Scottish Mission in Budapest, the RCH is interviewing various ministers, past and present, to hear the stories about their service at the mission. Today, we talk with Rev Dr. Ottó Pecsuk, former Associate Minister at the Mission from 2005 to 2009, to discuss how the church does outreach work, what radical love to refugees looks like, and the importance of pushing the boundaries of church to build God’s kingdom on Earth. 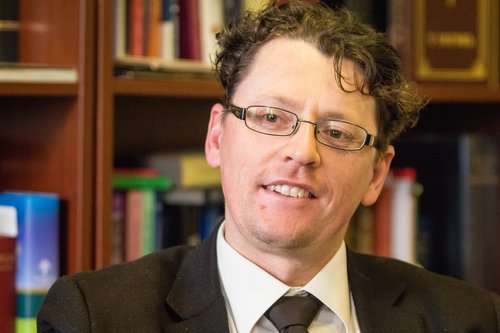 The Scottish Mission is a unique place in many ways. Its history shows the self-dedication of a series of great servants of the Lord. They offered their life, energy and time as a living sacrifice to God while they lived here in Budapest. In this company there were exceptional characters like Jane Haining or George Knight, but even we, the smaller characters, always felt this sacred heritage while serving at the Scottish Mission. This has always been a place where “the small ones” of Jesus Christ, the marginalized or persecuted found a shelter and a welcoming community. I do not know the exact answer how this worked. You just feel it when you are part of the Scottish Mission.

We inherited the refugee work as an integral part of the congregation. Of course, we also had a “normal” congregation, and often it was difficult to harmonize the two communities into one body of Christ. I guess, if we ever succeeded, it was the work of the Holy Spirit. Just one example. My wife who had difficulty with English, often led the Sunday School, where one third of the kids spoke only Hungarian, one third only English and one third both. In spite of this “Tower of Babylon” feeling, those were always wonderful and spiritually blessed Sunday Schools.

Refugees came to Sunday service and stayed over for lunch. Often they cooked, we only helped them in the kitchen or did the dishes after lunch. These “agape” meals were the highlight of the week not only for the refugees but also for many of our middle class congregants. It also happened that some of our refugee members had to leave their temporary apartments with short notice, so they actually lived in the church hall for weeks. This was absolutely illegal and not without problems. Still, we managed to help them through a difficult time. You could hardly imagine this elsewhere in the Reformed Church in Hungary or in the Church of Scotland.

I felt it both positively and negatively. In my time the Ecumenical Office of the RCH was very supportive. People who worked there actually understood what Scottish Mission was all about. Also the ministers at Fasor congregation were highly appreciative of what we were doing there at the Mission. As for the rest of the Reformed  Church in Hungary, I do not think we managed to be an integral part of the everyday life of church presbyteries or districts. The church can be very self-focused  sometimes and I think we were always serving and building God’s kingdom on the margins of the institutional church.

How does your time spent serving at St. Columba’s affect your work today?

It has become part of who I am. I have made friends with dozens of people from all around the world, many from Scotland. And in some ways I am still working for the Scottish Mission. I am responsible for Bible Mission at the Hungarian Bible Society, a work that was at the heart of the Scottish Mission in the 19th and 20th centuries. I am also teaching the Bible at the theological Faculty of Károli University, a modest attempt to walk in the footsteps of George A. F. Knight.