On the last Sunday of October, Reformed congregations collect offerings for a seeded cause following the decision of the Synod. The selected congregation for 2018 is the Reformed Congregation in Kesznyéten, where the church has been in a non-usable condition for ten years. The offerings will go towards restoring the church so that the congregation may celebrate Sunday worship there again. 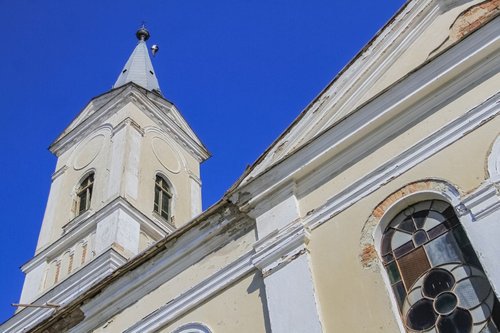 We visit the small, counting only 1800 souls, parish on a warm, sunny day in October in Borsod-Abaúj-Zemplén County. Nearby, Sajó Bridge is being renewed, so we use a raft bridge to get to Kesznyéten. Tents and several other temporary buildings belonging to the National Army surround the crossing point making it look as though we are in wartime. We are later informed that the use of raft bridges must be supervised by the army; it is uncommon however that such a small town is only accessible through a “military zone.”

The building has become life-threatening

The wartime metaphor did not prove to be wrong after a first glance at the church. The most significant building of the settlement offered a sad sight: thin, grey plastic film covered the roof, plaster was falling off the walls, the once colorful glass was now fixed with white glass, quarries were cracking, and the paint on doors had faded. In the year of its consecration, 110 years ago, the building would have been an uplifting beauty. Still, crumbling and falling apart, the building is fascinating, shouting for a makeover. Ten years has passed since the architect responsible for measurements stated that the condition of the main joist and the attic structure were life-threatening and the building should no longer be used. Now the building is in need of a full restoration: internal and external repairs, a water retention system, and replacement of the windows and doors, and of the flooring and the electrical wire system. 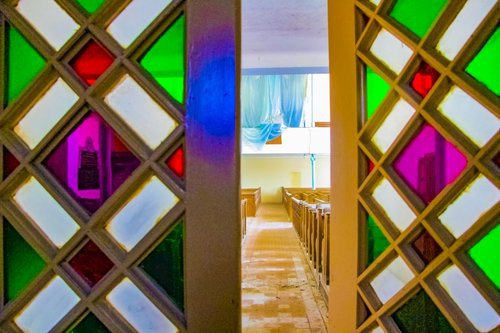 They are looking awaiting help

In the first part of the past century, Kesznyéten was a strong and rich agricultural region. The hard-working and self-conscious Reformed people built the big church in 1907 which was consecrated a year later in 1908. The current chief elder’s wife found, among family documents, the invitation of the thanksgiving celebration in 1908, in which was written information about celebrating communion, and also baptism. 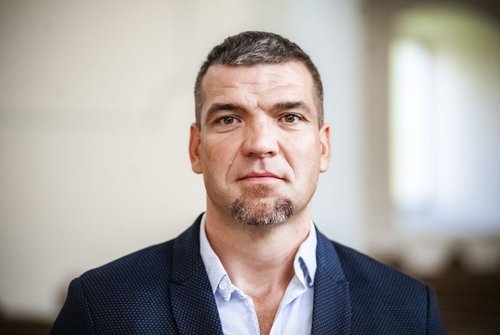 After the government took land for itself, the local farmers went away for work, many going to the chemical generating unit in Tiszaújváros. As a result, the population of the town ebbed away, and now, the majority of the town people are elderly. Today, half of the population of Kesznyéten is Roma, and Hungarians send their children to schools in Tiszaújváros. “In Kesznyéten, we do not have Religious Education (RE) class in the school. I also go to teach in Tiszaújváros, where we have one Reformed RE a week for only four groups in kindergarten. Because of this, unfortunately, the congregation lacks children since they spend the majority of their time in the neighboring town. People here in Kesznyéten are mostly elderly people who live on a pension. They cannot donate millions, however, they offer their time and energy, gladly, for the community and the church,” emphasized the pastor, Rev. István Károly Nagy. 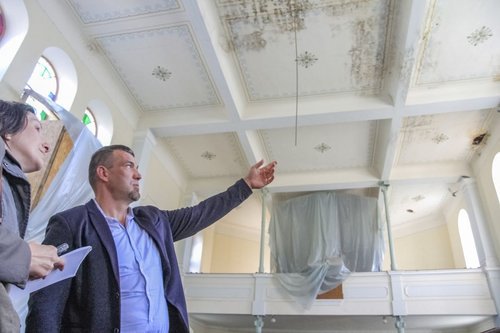 The members of the small Reformed congregation are solidary and dedicated; they want to keep the community alive and to help the church be restored. They proved their dedication by collecting millions in this underprivileged town. The renovation of the church costs two hundred million forints, and the congregation has already received the bigger part of this amount (as we were informed by the pastor), but they still need approximately eighteen million forints to start the works. Therefore, they are looking forward to the generous donations from Reformed congregations at the end of October.

Leaving the parish, we headed to the community house while the pastor talked about the disastrous condition of the fence, but now, even more urgent is the renovation of the church building. The condition of the tower has not changed, the ridge-piece was renewed twelve years ago, and an electric bell calls the people for worship, which is now being held in the community house. According to a recent census, the congregation is made up of 190 members of which 25-30 people gather regularly for Sunday worship. 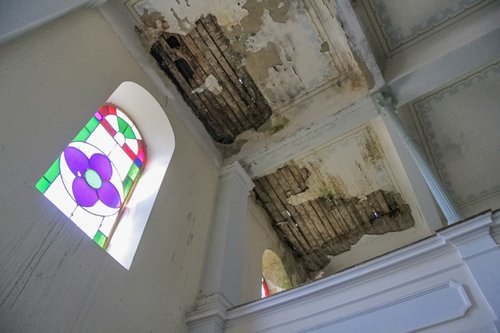 Murvai Barnáné Irmuska, the bell ringer, Firtko Barnáné Ilonka, an elder, Turóczi József, the booking clerk and elder for 50 years and chief elder since 2012, Katica, his wife, and elders Kádár Bertalanné Kati and Kókai Dezsőné Esztike, a total of six people from the congregation were waiting in the congregation house to talk to us. During conversations about the everyday life in the community, they expressed their hope that the restored church would one day be filled with people, but, for now, they were happy that on holidays more people would come to worship. They also told us that they organized programs where they could reach out to those who were not regular visitors. 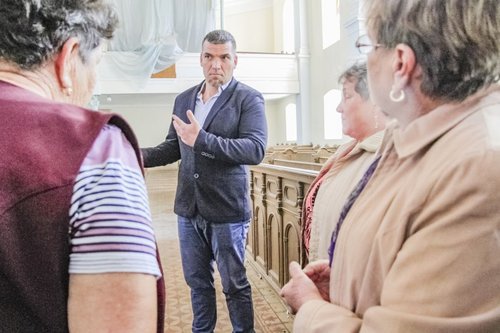 “A lot of people say they will come to church when the renovations are finished, but we feel the same here [in the congregation house] as in church,” said Auntie Katica about the current place of worship that was once a school, which the government had given the back to the congregation during a period of compensations. Six years ago, with the help of state funds, they were able to renovate it.

Hope under the foil

Our hosts lead us to see the church building where memories evoke. The tradition here was like that in many other places: men and women did not sit on same section of pews; moreover, in older times, the rich farmers, the young, and the confirmands would sit in different places of the church, the elders told us. Auntie Irmuska, the bell ringer, says that before the time of the farmer’s cooperatives, in the communist era, the bell tower was also used as a watchtower during the harvest season. Girls would keep guard during the daytime and men after the sun set, watching for signs of fire among the houses where they would do the threshing. Today, the only visitors of the tower are the birds as the decaying stairs are no longer safe. 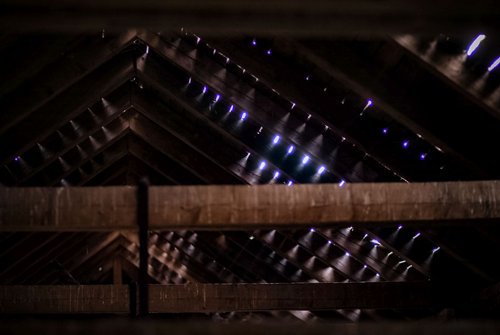 Unfortunately, we could not see the view from the bell tower the organ and the pulpit as they were covered with foil to protect them from the rain, falling pieces of the wall, and pigeons flying inside the building. The cover of the roof was replaced 22 years ago, but the tar-based coverslip could not resist the weather so it soon started to fall apart. Now top of the building is covered with a plastic foil to shelter the roofing, but only a full renovation can resolve the flooding and the great holes in the ceiling.

Congregation members help to clean up the church several times a year, trying to preserve the benches which they really want to keep there. The community truly cares for the church, people with different religious backgrounds, and even non-believers, are joining the renovation project. Three years ago, the Reformed people in Kesznyéten first thought about renovating the old church. Since then, much help has been given from the locals and those living nearby. “God is not working in one place; He is opening the hearts of people living in the neighboring towns as well. We are grateful because today we have achieved our goal, but we had to work hard during the past three years for it,” tells István Károly Nagy.

The municipality of Kesznyéten and the neighboring towns also joined in donating to the church, the Reformed people of the neighboring city called Tiszaújváros lent their own church for a charity organ concert that the people in Kesznyéten could not organize. Also, the same congregation hosted the traditional pancake and doughnut cooking of Kesznyéten, and the income went towards the renovation. Many secular organizations have also donated ingredients with the help of the workers of the municipality. Besides local supporters, thanks to the quick actions of the pastor, one of the well-known commercial chain stores gave milk, oil and yeast for the making of goodies. The locals also organized charity balls and second-hand markets in the congregation house, and the income from these events also went to the renovation of the church. “These are great occasions to be together and to talk with one another,” says Auntie Esztike. According to her, through these events, they are also able to reach out to the Roma population as well.  The Roma are mostly Catholic, so they do not attend Reformed worship services, with the exception of a few occasions, such as marriage or baptism, during which the congregations is able to welcome some Roma families. Kati Kádárné smiles when she thinks about a local community event when they formed a living-chain embracing the church. “We were so excited about making it all around and nervous whether we had enough people for this – and we did it!” she says. Ever since, the people in Kesznyéten have not let go of their church; instead, they cherish it with their love, faith and solidarity.

The Reformed Congregation in Kesznyéten is also one of the beneficiaries of the Gustav Adolf Werk (GAW) Aid organisation responsible for the Diasporawork of the Protestant Church in Germany (EKD). The GAW is a long-standing partner of the RCH regarding construction work in local churches. Every year, on the last Sunday of October, the RCH church members dedicate an offering to support one congregation. Last year the support of church members contributed to a project of completely new church in Nyíregyháza.