RCH continues in partnership with HEKS/EPER to support the work of Reformed churches in the Middle East.

The Scholarship for Church Schools in Syria Program by HEKS/EPER encourages and strengthens the inclusive environment of the schools, allowing a safe space for Muslims and Christians to learn and live together. 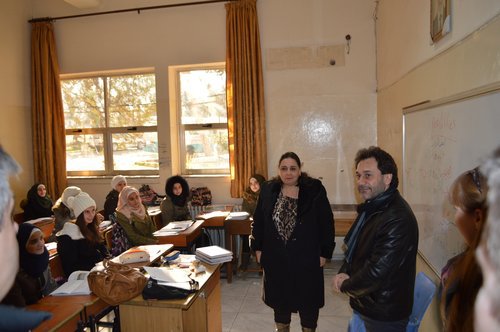 The schools run by the Reformed Churches in Syria serve as an important instrument in promoting love, inclusivity, and mutual understanding. The ten private schools of the National Evangelical Synod of Lebanon and Syria (NESSL) and the Union of Armenian Evangelical Churches in the Near East (UAECNE) take pride in the quality education provided for their 3 756 students. These church schools are well-known and greatly appreciated by their communities and the state. However, due to the war, school fees are becoming harder and harder for parents to pay, causing the church schools to be put into difficult financial situations. HEKS/EPER created the scholarship project in 2016 as a relief for the parents, allowing them to continue to send their children to the schools.

In Syria the state provides school for everyone and free of charge. Beside of the educational system of the state, there are private schools, for which the parents of the students have to pay a school fee.

Since the protestant churches were founded in Syria in the 19th century, they were also involved in education (as later on also churches of other denominations). Even today, many of their local churches have own schools. They are stately recognized and well known by their high educational level, but as private schools they have to be financed by fees of the parents or other donations. The church schools are an important part of the identity of the

Protestant churches in Syria and institutions, which are well known and appreciated by a wider part of the population. The ten schools of NESSL and UAECNE are attended by 3’756 students, out of them 65% are Muslims.

The General Convent of the Hungarian Reformed Church gifted 7 000 USD to the Scholarship for the Church Schools in Syria through the HEKS/EPER Aid Organization of the Swiss Reformed Churches. The grant will allow for the continuing support of 1 500 students through scholarships of 50 and 100 USD during the 2017-2018 school year. Through the scholarship project, the General Convent supports the hard work and dedication of the ten church schools to provide education to children and promote inclusivity within the schools.

Christians are in Syria a strong minority and made up before the war about 10% of Syria's 22 million people. The vast majority of Syrian Christians belong to Eastern denominations as the Greek Orthodox Church (about 503,000 members) or the Armenian Apostolic Church (between 112,000 and 160,000 members). Among the Churches, which are in communion with Rome, the largest is the Melkite Greek Catholic Church (118,000 and 240,000 members). Protestant churches of different denominations gather some around 50'000 followers in Syria.