The Synod Council of the Reformed Christian Church in Serbia (RCCS) has decided on the appeals process regarding the recent bishop election in Serbia. The Council met on 4 February regarding the appeals and voted to repeal the result of the election, said Erzsébet Csányi, Deputy Bishop of the RCCS, who at this meeting assumed the former bishop's position and responsibilities. She evaluated the circumstances, adding, "This is a situation that will not be easy to solve." To accomplish this, the Synod Council initiated the convening of a Synod meeting.

Two appeals were received during the election’s two-week-long appeal period that began after voting envelopes were opened on 12 January. One from Attila Orosz, Dean of Bacska Presbytery and one of the nominees for the bishop seat and the other from András Molnar, Church Legal Counselor. Orosz doubts that the other nominee, Béla Halász’s pastoral degree, which he received in Budapest, Hungary, is recognized in Serbia. The other appeal from Molnár disapproves the validity of two congregations’ votes – Bacskossuthfalva and Maradék. On 4 February, the Synod Council, which has 12 members including the Church Legal Counsel and two bishop nominees, met and voted on the election results. Aside from one abstention, they voted 6:5 to accept the appeals and repeal the results of the election.

After this voting, Csete-Szemesi – who, according to unofficial sources, voted to repeal the election results - handed in his resignation to the Synod Council. Deputy Bishop Csányi will assume the bishop's responsibilities from the departing church leader. She was asked why the bishop's resignation was necessary if his term ended last October when he reached retirement age of 75. The other question to her was upon what legal grounds he was able to participate and vote in Council meetings from October until now, if he was no longer a member of the Council. She replied, that she could not say anything else, except that this is a situation that will not be easy to solve. 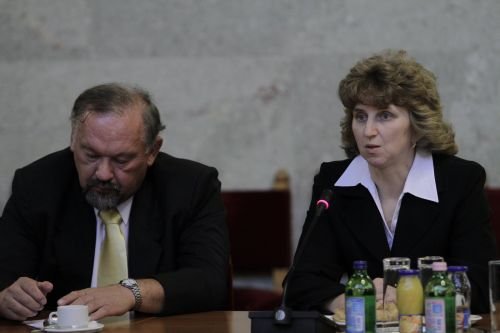 The Synod Council decided to convene a Synod Meeting. Csányi said, "It is a difficult case, which was drawn out for too long and became very messy, and unfortunately our regulations do not provide clear guidance for a situation like this. My aim is to close it as soon as possible. We think the best way to do this is the convening of a Synod meeting because it can create a clearer situation and guide us to a peaceful solution." She added that there is a 15-day period to appeal against the Council's decision, which includes submission to the Synod Council, the church's decision-making body. She also said the convening of the Synod meeting, hopefully to be held this spring, can only happen after that period. At that time, there will be a possibility to review the decisions of the Synod Council.

It came to light from previous interviews that Béla Halász would support the invitation of observers or a mediator from sister churches to the Synod meeting, but Attila Orosz thinks it is not necessary. Csányi does oppose the possibility of outside assistance, but she added that she is not able to decide alone. Before the Synod meeting, they are planning a conference for the pastors to prepare for the meeting together.

After the Synod Council decision, Halász was asked about the validity of his pastoral degree. He said he would look for the certificate, but assured that he had passed the exam to be officially recognized in Serbia, which was not questioned by anyone throughout his 25-year pastoral service in Hertelendvfalva and as Mission Consultant in the Synod Council. Furthermore, Halász raised two questions regarding this case. First, how it is possible that several pastors' certificate of degree recognition in Serbia are going missing from the church archive, and also why the other candidate, Orosz, voiced his uncertainty about Halász's nomination at the end of the voting process instead of during the nomination period.