In celebration of the 175th Anniversary of the Scottish Mission in Budapest, the RCH talks with Rev Bertalan Tamás, former Minister at the Mission, to hear about his time in the congregation. Rev Tamás was the Minister at the Mission from 1976 until 2005, a time filled with uncertainty, community building, and interfaith relations.

In celebration of the 175th Anniversary of the Scottish Mission in Budapest, the RCH is interviewing various ministers, past and present, to hear the stories about their service at the mission. Today, we talk with Rev Bertalan Tamás, former Minister at the Mission from 1976 to 2005, to discuss the roles that the Scottish Mission has played over time, the importance of interfaith relationships, and the Mission’s focus on ecumenical relationships. The following is an edited portion of the interview – the full text can be read here.

The Scottish mission was, during the time of the war, a kind of refugee place and saving place of the persecuted people. I was nominated to be the pastor in 1976 and when I was ordained to be the minister of the congregation I thought it would be good, somehow, to find those that were former pupils of the Mission School who survived the horrible times, the Holocaust. We got more than 200 names together and they were old ladies already. This was my charge somehow, to hold meetings for them where we invited them to get together maybe two times a year. It was very moving, they were very happy with the invitation, and came into the church. It was interesting that some of them, during the persecution, converted to the Christian faith while some of them kept their Jewish tradition.

When we invited them, a great number of them came and they told me it was a difficult time but they felt always the love in the school. This was the time when I started to raise awareness to the memory and martyrdom of Miss Jane Haining. The survivors remembered how much love she gave to them. You can understand the fear, but this is what they still remember – that they were really shown the love of God. Therefore, it was really relevant for me that the Scottish congregating was not just a congregation in Budapest but, especially in those difficult days, the persecution and everything, they really tried to say something about the love of God. 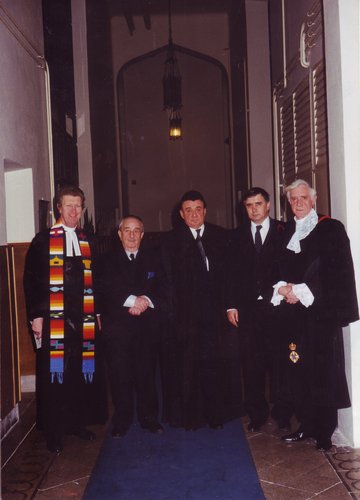 I was nominated in 1976 to be the pastor of the congregation and at that time we were allowed to have an English service once a month but in Hungarian we had services every Sunday. Therefore it was not an easy time, especially if you are allowed to have a church service only one Sunday – nobody can keep in their mind what Sunday is which. It’s impossible to keep track of it. After the changes in 1990, the new door opened and the main task for me was to revitalize the congregation. We started to reorganize the congregational life, especially the English one, because a lot of English speaking people came to Hungary. My wife, Elizabeth was also a great help. She was a real people’s person, and she had an important role in building up the new congregation. She was very active in the coffee fellowship, and created a warm, friendly atmosphere. I used to say jokingly that nobody did as much dishwashing for the ecumene as she did. She passed away two years ago and I was truly moved that St.Columba's was present at her funeral. Rev.Aaron Stevens, who made a loving tribute. It is good to know that she was loved in Scotland.

For instance, the Anglican Church didn’t have any chapel; they had one before the war that was located in the castle, but it was bombed and so they worshiped in the embassy building. I was later asked to go to the embassy building and have the Anglican service. Thanks to God, the Church of Scotland [CofS] said to me, “You can do it because we believe in the open communion table,” because in the Anglican tradition it was very important to have the Eucharist during every service. I talked to the embassy people and told them that it was impossible to keep coming to the embassy for services. You know, for security reasons they had video cameras and metal detectors and more. At the British Embassy, attaché Nicolas Davies, who was an Anglican, organized Sunday services, once a month. He and I thought up together that it would be good to combine the Presbyterian and Anglican congregations. He was an excellent partner in this work.

I told the Anglicans that they should come to the CofS and so it was a great thing that the Anglicans and the Presbyterians ended up worshiping together. We agreed one Sunday Anglican, the next Sunday Presbyterian. It went well. Unfortunately, later, the Anglican priest, very high up, decided to separate from us and become an independent congregation. There was a kind of fear that we couldn’t manage on our own, but thanks to God the congregation developed very positively even though the Anglicans were gone. We have really grown.

The other important thing was that during the time of the changes many fundamentalists and others came to Hungary. This was the new territory to convert the people, you know, the thinking was that we have to convert them. Therefore it was really important in the Scottish congregation to keep together these two historical lines of the church – the Anglicans and the Presbyterians and it worked well. Thanks to God it was a growing and nice congregation. This was the so called revitalization of the congregation.

The main task was that in 1976, when I was nominated to be the pastor of the congregation, the RCH and the CofS had a conference about what would be the future of the congregation and thanks to God both churches very much supported the openness of the Scottish congregation here in Budapest.

One time I went with Chief Rabbi Jozsef Schweitzer and Rabbi Istvan Doman to Spain for a Jewish-Christian dialogue event and we sat in the evening and old Hungarian Jews who lived abroad came to our table and they said, “Oh, if we had had this beautiful brotherhood we never would have left Hungary!” With the Jewish community we had a strong friendship and relationship and this was one of the main things.

The other was to organize the congregational life, which was very important. This is the way of God, how He works. For instance, there was a very devoted Christian couple, where the man was the ambassador from Chile and his wife was a very devoted Christian and they both loved to come. After a few services they said, “Minister, We will help you,” and that was it. The members of the congregation, these new English people, they felt that they needed a home and they wanted a place where they could meet and I provided that for them. Another important step was that we introduced the coffee fellowship time. It was always longer than the whole service because the people loved to get together. With the time of the changes there was a new openness and these people could find a place they felt at home in, where they found their Christian place. The other thing is that in the sermons they were really glad to hear something about the past in them, they really liked it, so I always had to include a bit of history.

In the CofS at that time there was a great interest in what will be the future and what will be the life of the congregation in Hungary. In the CofS we had a lot of good friends, some of them in influential positions, who really supported the goals of the congregation here in Budapest and they really gave it their best to help us. This was something that was not just our responsibility and commitment to build up this congregation, but also the CofS was really a partner together with the RCH. Therefore, it was a mutual thing and this is what I really experienced – that both churches were very open and supportive.

In Budapest, two ministers shared the work, a Scottish, and a Hungarian one. Primarily, this was because of the school, where teaching was in Hungarian. After the political changes in 1989, Bishop Károly Tóth and I asked the Church of Scotland to send a Scottish helper to Hungary. The then Secretary for Europe, the lovely Andrew Morton, listened to this request, and sent Rev Alison McDonald to us. She was great help. She was really European minded .Besides congregational work, she also helped our work at the ecumenical department in the Synoda Office. What is more, she taught at the Budapest Theological Seminar. Amongst others, she taught Zoltan Tarr and Otto Pecsuk, who were later assistants in the CofS. They also gave interviews for this jubilee publication.

Thanks to God in my time four moderators of the CofS visited the Scottish Mission in Budapest in shows of public support. It was a kind of encouragement from the CofS to express that we were not alone; they were walking next to us, together with us. In many cases, I experienced the help of the CofS as an ecumenical minister. When I spoke with church leaders here in Hungary and I said we discussed this with the CofS, what do you think, they were always open to it. It was a really, really deep brotherhood and friendship. This is what I experienced on a church leadership level.

To read the rest of the interview with Rev Bertalan Tamás as he talks about being both the RCH’s Ecumenical Officer as well as being the lead pastor at the Scottish Mission, his work on the Jewish-Christian council, as well as his current connections to the CofS’s International Presbytery, you can click here.