The Roma Ministry of RCH and the reformed congregation in Kecskemét held a joint event to honor the Roma victims of the Holocaust in the courtyard of the Hajnalcsillag (Morning Star) Roma Afterchool.

“Na bistrav“ – “We don’t forget”. This was the motto of the silent procession held in remembrance of the Roma people deported and murdered in Hungary during the Second World War. The commemoration was also an opportunity to promote reconciliation between different nationalities and ethnic groups. The National Reformed Roma Ministry has been organising commemorations since 2019, and this year the participants gathered in the courtyard of the afterschool run by the reformed congregation in Kecskemét.

Photo Gallery of the event:

Europe’s Roma and Sinti people (often labelled as ‘Gypsies’ historically) were targeted by the Nazis for total destruction. The Porrajmos, or Porajmos, which translates to 'the Devouring', is the term used to describe the Nazi genocide of Europe’s Roma and Sinti population. Historians estimate that between 200,000 and 500,000 Roma and Sinti people were murdered by the Nazis and their collaborators. Many more were imprisoned, used as forced labour or subject to forced sterilisation and medical experimentation.

Even to Read We Must Perish is Dreadful

It was 75 years ago, on the night between 2 and 3 August, 1944 that Nazi Germany closed down the Gypsy camp in Auschwitz-Birkenau, exterminating some three thousand Roma men, women and children – since 1972, this day has been the International Roma Holocaust Memorial Day. Initiated by the founder and artistic director of Madách Dance and Theatre Secondary School and Primary School of Arts, a physical theatre performance was created in the spring that deals with the tragedy of the Roma Holocaust. The piece has recently been performed at Starpoint Reformed Youth Festival. We sat down with Gyula Sárközi to discuss the background of the performance, the title of which roughly translates as ‘The Lurking Plague of the Past’, as well as the still relevant legacy of the past events.

The students of the Afterschool spoke to the hearts of participants reciting poems and stories about the history of the so called “Gipsy town” of Kecskemét, but the audience could also learn about the long and colorful history of the Roma communities living in the city. Parts of Ágota Varga's documentary “Porrajmos” (Gypsy Holocaust) showing Hungarian Roma survivors recalling their memories of 1944, helped understand the historical context.

The documentary contains series of interviews with Roma Holocaust survivors as they talk about their experience. The film also shows them walking together in Komarom, to the site where many were kept in inhumane conditions. The film is unique in allowing for many emotions and memories to emerge, as well as the director's effort to confront Roma survivors with persons who were related to the oppressive regime.

Béla Bán, the dean of the local Presbytery led the worship. “At first, I wanted to open the book of the Lamentations of Jeremiah to remember the terrible events, but I thought it would be better to quote from the Gospels that gives encouragement and points to Jesus Christ,” said the pastor, who offered a biblical reflection based on the story of the Canaanite woman.

The so-called Cigányváros (‘Gypsy Town’) was a separate area in Kecskemét. The ﬁrst written record of the Gypsies in Kecskemét dates from the late sixteenth century. Some of them had houses (and even vineyards) in the following decades. During the eighteenth century, more and more of them bought or built houses in the inner town. Their population grew rapidly. Between 1768 and 1838, the number of their households increased by about a quarter. The gravity of the problem is demonstrated by the fact that almost one third of the Gypsy families were in a desperate situation. In order to reduce tensions caused by cohabitation, the town council (partly referring to ﬁre safety reasons) allocated the abovementioned new residential area for Gypsy families next to the cemetery in 1804. 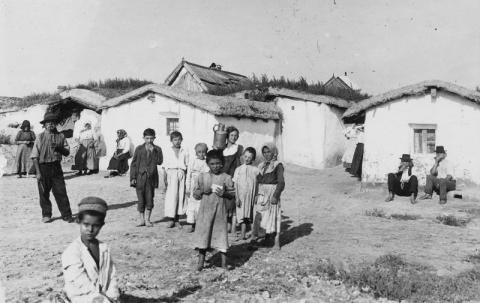 During the 1956 revolution, several people fell victim to fires during the protests, the first on October 26th. The next day, on October 27, the Gypsy town of Kecskemét was destroyed by tanks, and two MiG-15 fighter jets also machine-guned the gypsy settlement. Witnesses and historians say there were many injured and several fatalities in the brutal action.

"This commemoration was actually the closing event of the Reconciliation Among the Nations seminar organised in Kecskemét on August 8th," said Mrs. Gondi, host of the Hajnalcsillag Roma Aftercshool of the city, awarded as reformed Roma pedagogical assistant of the year. "It is important that we can demonstrate our wounds in Christ, and that revenge does not dominate our lives, but we seek peaceful coexistence and follow Jesus," she added.

The memorial service for the Roma victims of the Holocaust was closed with prayers and blessings by Béla Bán, dean of the presbytery, József Kuti, reformed pastor, and the Lutheran minister János Kis.

Identity and Service Fulfilled in Christ

Anita Tóth has been serving as the National Roma Mission Coordinator since September 2018. In this interview, we discussed the importance of family and traditions, the work of the Holy Spirit, and her way leading to the Synod Office.

Translated and edited by Réka Komáromi