Each year since 1997, a group of students from Calvin College, a reformed Christian university in Grand Rapids, Michigan, USA, comes to Hungary for a semester abroad at Károli Gáspár University of the Reformed Church in Hungary. The students immerse themselves in Hungarian life and studies, while being transformed through vital service learning placements.

During their semester here, the Calvin College students had a plethora of opportunities for growth and change, including being part of an international church, traveling around the region, learning more about Budapest, and getting involved in service learning projects. The students took classes during their time here at Károli Gáspár University of the Reformed Church in Hungary, but much of their learning was experiential and was gained outside of the classroom. Each year the Calvin College group is led by a different faculty director, who is in charge of coordinating the semester abroad. Dr. Jeff Bouman, the Director of Calvin’s Service-Learning Center, says that, ”The focus of the semester for the Calvin students has always been a blend of the culture and history of Eastern Europe, along with the particular expertise of the faculty director. I had the opportunity to direct in 2011 and 2014, and my contribution to the experience has been the service-learning practicum that has been developing.” It is this in-the-field component, coupled with the opportunity to live in a vibrant city like Budapest, which many students find to be so life-changing. 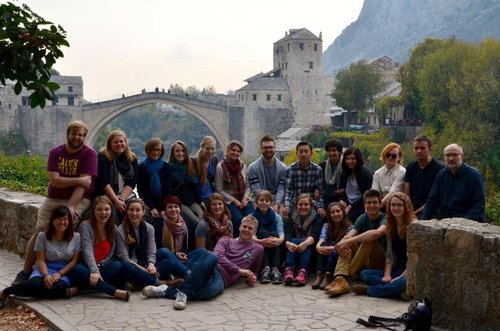 As their semester came to a close, the RCH spoke to some of the students about their experiences here in Hungary and how they feel they have been impacted during their time abroad. Their insights highlight the importance of cross cultural learning and how crucial it is in today’s constantly connected world.

What kind of an effect has being part of an international church had on you?

Courtney Mills: Being part of an international church has greatly expanded my understanding of the different ways people worship and love the Lord, whilst being a part of the same Christian religion.

Emily Peters: The beautiful collection of so many nationalities on any given week granted me a greater idea of what heaven will look like.

Julia LaPlaca: I have really loved being a part of an international congregation – it’s a dynamic worship experience.

Maaike Mudde: It is meaningful to me that the fact that St. Columba’s was international – and thus a community of diverse perspectives – made it unique in the RCH, and more open to social justice work, such as an engaged response to the refugee crisis in Keleti station and housing Kalunba. The fact that St. Columba’s is international made me feel welcome and like I belonged. It is a hospitable place.

Trey Tirpak: [It provided a] great instant community, so welcoming. [It’s such a] great way to get to know people from all over the world.

In what ways have your studies and service in Budapest been transformative for you, both personally and professionally?

Courtney: My studies and service in Budapest greatly expanded my understanding of the culture of Budapest. I believe I have become much more perceptive and aware of my actions in regards to the radically different culture I am a part of here.

Michala: I feel less tied to my identity as an American and feel primarily like a global citizen. Service learning has provided me with a way to bridge cultures and compare the geopolitical issues related to social justice across continents.

Julia: I don’t think I have ever learned so much in a semester. I’m really glad I did service learning in a school because I’m interested in pursuing a teacher career. I got valuable professional experience at service learning.

Maaike: During my time in Budapest, I’ve been close to ‘the headlines.’ I was in Keleti station when Budapest was in world news as a part of the path for refugees toward Germany and other countries, and in Istanbul soon after Erdogan was reelected and Paris a week after the terrorist attacks. While this might seem ‘flashy,’ what it taught me more than anything is the simple fact that the stories behind the headlines are real.

Trey: New contexts [give you a] different ‘look’ on things, especially when we reflect together or at church. [I] would love to know more about the church in Hungary though [because] I also think it’s really good for us to see that ‘church’ can be done differently. 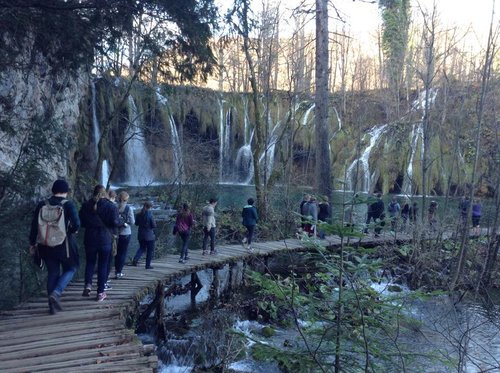 How do you think your time here will impact you upon your return to the United States?

Courtney: I very strongly believe that my time here will give me a greater understanding of what it is like to be placed in a culture I am unfamiliar with.

Michala: I will return to the United States with a hunger to learn about global politics and how to bridge cultures. Studying social narrative and collective memory in the context of Hungarian culture and history has caused me to reflect on my own culture and consider the ways Americans use rhetoric and language to further our American identity.

Emily: I have gained greater cultural and historical understanding. I can see the world through a different perspective than I did four months ago.

Julia: When I return to the US, I will have a more vested interest in Europe and Budapest. I think I also have a more nuanced view of the United States. I also think I will come back.

Maaike: During this time here in Budapest, I have made a dear friend named Bayram – he is a Turkish student who is a Muslim (former Imam, actually) and he has taught me so much about Islam and given me new questions and passion for my own Christian faith while wholly respecting his.

Trey: [It has given me a] greater appreciation for our culture (Not that Hungarian and European culture is bad! It’s just that I think we Americans forget that we have culture.) [Due to this experience, I will also] find a way to get involved in the creation of our communities.

The students from Calvin College are now back in Grand Rapids, Michigan, USA; some are beginning their January term where they are joined by five Károli students for the month (this is another feature of the partnership – in exchange for KGRE hosting Calvin students in each fall term, Calvin now hosts 3-5 Károli students each January) and others are resting before the start of their next semester. The RCH sends well wishes to all of those who have been transformed through their time in Budapest and also holds the Károli students in our hearts as they begin their American experience! This global partnership is truly something to be cherished.

Read about the history of the Calvin College Program here.