On November 22-23, the Synod Meeting of the Reformed Church in Hungary (RCH) was held in the in Budapest. The agenda of the meeting included a report on the Starpoint Youth Festival and the celebration of the 20th Anniversary of the Voluntary Diaconal Year Program. The beneficiary congregation of the 2018 National Collection was also announced. 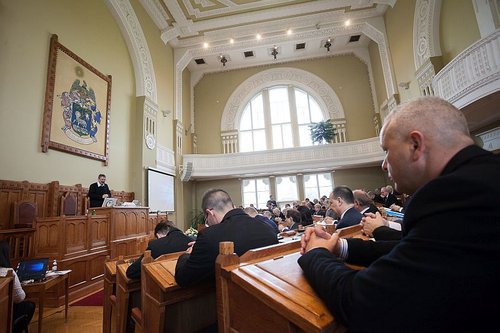 In his opening remarks, Presiding Bishop István Szabó recalled the various festive celebrations held in this memorial year of the Reformation. He referred to John Calvin saying that if we witness Christ and preach on His words, then the celebration of 500th anniversary of the Reformation is not in vain, instead, it brings blessings. Listing some of the events of the Reformation year, the Bishop referred to the Common Synod of the HRC in Debrecen, the Theological Conference of the Doctoral Collegium, as well as the participation of the RCH delegation at the General Council Meeting of the World Communion of Reformed Churches. The Presiding Bishop also highlighted the Starpoint Youth Festival and expressed joy in the presence of the four young delegates from the Middle East at that the festival.  Important events were mentioned by Bishop Szabó including the National Reformation Celebration held on October 31st at the Papp László Sports Arena organized by the Reformation Memorial Committee as well as the Comprehensive Agreement signed between the Hungarian Government and the RCH. This agreement was approved by the RCH Synod on the 22nd November. 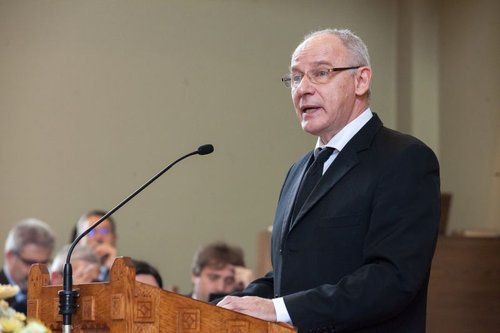 During the meeting, ecumenical questions were also raised by the Presiding Bishop, who expressed concern regarding the Open Letter of the Conference of European Churches titled, What future for Europe? The Presidium of the General Convent had also discussed this document at its recent meeting in Rimaszombat, Slovakia. The Bishop shared his disappointment that the document did not reflect neither the experiences of the Eastern European region nor the current status of Christianity in the world; no words were mentioned on the persecution of Christians. In addition, the concerns expressed regarding the common Europe in the Open Letter, reminds us, Hungarians, of the so called “theology of service,” which was the former theological approach represented by church officials in the Communist era. Bishop István Szabó was dismayed about the WCRC’s association to the Joint Declaration of the Doctrine of Justification this past summer. He added that although our ecumenical relations are strong, it is moments like this that we feel there is a lack in mutuality of our relationships.

A report on the recent Starpoint Youth Festival, held this summer in Debrecen, was presented to the Synod. Every two years, thousands of young people around the Carpathian Basin gather to worship, praise, and develop in faith together at the Starpoint reformed youth festival. This year’s festival was held from July 25-29 in Debrecen, Hungary. Over 3,500 people were present for Starpoint’s Opening Worship on Wednesday July 25.

The Synod members also received a report on the Voluntary Diaconate Year (ÖDE) program of RCH. Twenty years ago, the Diaconal Year program started with eleven young people in Hungary, and now there are between 1000 and 3000 young people taking part. The program provides a one-year term volunteer service opportunities for young adults between 17 and 30 years of age, either abroad or in Carpathian Basin Hungarian communities. Within the year, volunteers help charity services, mission programs, or congregational tasks. The RCH celebrates the 20 years anniversary of this program and the Synod members were also listening to the personal testimony of a young volunteer, who spent a year abroad through ÖDE and this experience made him more involved into the Roma ministry of RCH after he returned home. 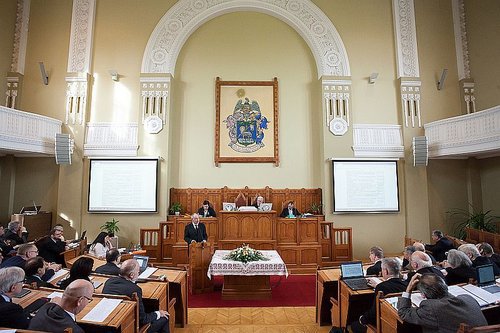 After the Synod Meeting, at the Press Conference at the Synod Building, Bishop Károly Fekete on behalf of the Reformed Church in Hungary talked about the different campaignes of the Hungarian Reformed Church Aid starting this December and he also highlighted the donation campaign dedicated to supporting the Syrian Sunday School programs.