The delegation of the Reformed Church in Hungary (RCH) continued its travel from Lebanon into Syria. The delegation visited local congregations in Damascus, Homs, and Aleppo to learn more of the ministries of the National Evangelical Synod of Syria and Lebanon (NESSL) and the Armenian Evangelical Community in Syria. Short account of a challenging journey.

In the footsteps of Apostle Paul

In Damascus the delegation of the Reformed Church in Hungary (RCH) visited a school run by the Union of Armenian Evangelical Churches in the Near East (UAECNE) in the city, which is planning to be renovated soon thanks to the Hungarian funds. 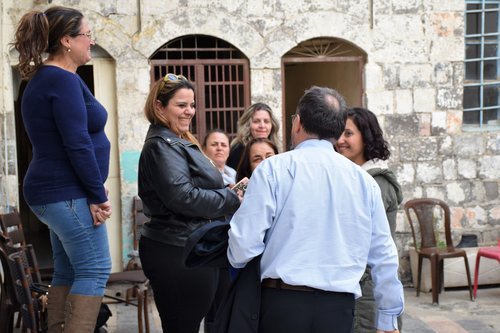 The delegation was received by Bishop Armash Nalbandian, primate of the Armenian St. Sarkis Church in Damascus, who talked about the active ecumenical relationship between the Armenian Orthodox and Evangelical Communities in Damascus, which often hold celebrations together. 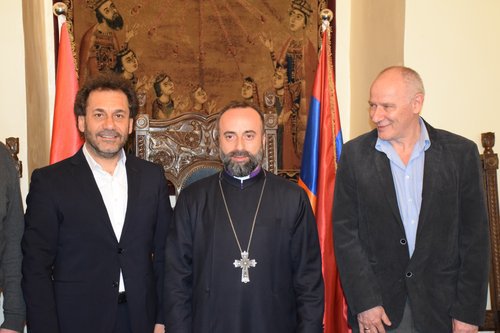 In Damascus, the delegation visited the Evangelical Church of Damascus, where Rev. Butros Zaour, moderator of the National Evangelical Synod of Syria and Lebanon (NESSL) and pastor of the local church, shared stories on the life of the community which had suffered from the war as the church building was hit by multiple missiles. 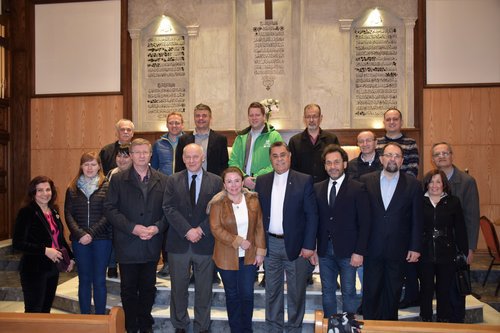 Due to the war, many children could not go to school in the city, and many people, including pastors, left the country. Hatred and fear spread which was not characteristic in Syria; Moderator Zaour said that the church sees its mission in healing the wounds of society and working towards reconciliation through the education ministry.

Listening to the situation in Damascus, the city where the eyes of Apostle Paul were opened, Bishop Fekete reflected, “It is encouraging to see that the eyes of the church community in Damascus have opened. They want not only to restore the past, but also welcome a new beginning. They paid a big price but they understand the importance of building the future on healing the souls of the children. I see a community of strong spiritual endurance, which even in its weakness empowers us, Hungarian Reformed people.” 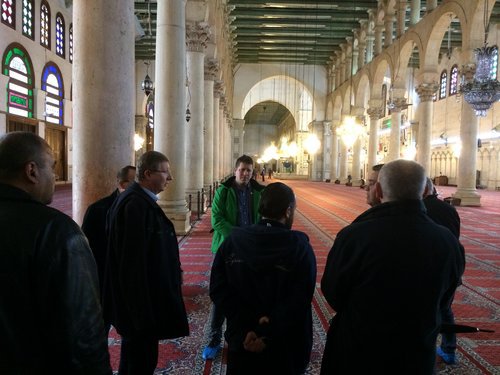 The time spent in Damascus involved a short visit to the ancient underground Chapel of Saint Ananias, and Rev. Zaour also arranged a visit to the Great Mosque of Damascus and a meeting with the leader of the religious community. The Imam, close friend of the moderator, himself was kidnapped and mutilated by the rebels. 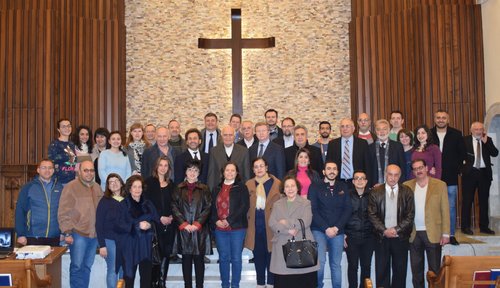 The congregation runs youth services for different age groups, including Sunday school. The community is also strongly dedicated to the work for reconciliation of society by running a program called Space for Hope. This project, in addition to bringing together young people from different religious backgrounds, offers workshops and training programs to enhance the social awareness and address crucial topics. The congregation also opened a library to give space for cultural events in the city of Homs. All these activities aim to help and support the Christian community to stay in their homeland.

The Bishop thanked the congregation for the kind welcome and talked of the connection he sees between the Syrian and Hungarian community, referring to the Hungarian diaspora. He said that here in this congregation, he sees hope and what it means to believe and keep hope alive despite the tragedies. The Bishop continued, “In Hungary, Reformed pastors are praying for all countries, and the Syrian community is also being lifted in these prayers.” He also assured the congregation of the continuous support for all efforts to preserve the Christian presence in the region.

The delegation also visited the Jesuit Community in Homs and remembered the Dutch martyr, Father Frans van der Lugt, who had gained recognition for insisting on staying in besieged Homs despite the daily shelling and dwindling supplies. He was shot and killed in 2014. 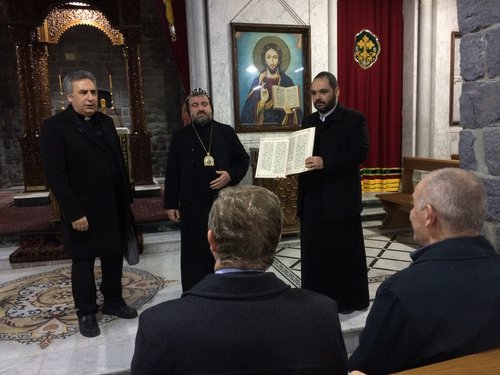 An oasis in the desert

The last days of the visit were spent in the city of Aleppo visiting both NESSL and Armenian Evangelical programs and activities with special attention to major construction projects of both churches. 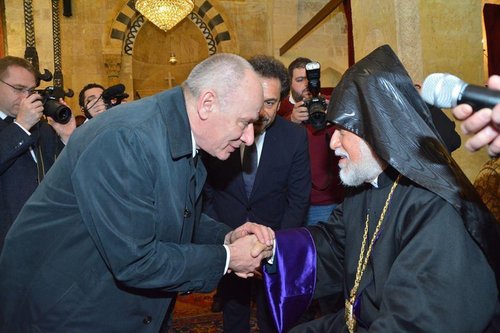 For a special moment, the RCH delegation attended the rededication service of the Armenian Orthodox Forty Martyrs Church in Aleppo. Armenians in Aleppo gathered in the centuries-old church for the first mass since its restoration began more than a year ago. At the end of the service, Catholicos Aram I. personally welcomed the delegation.

The RCH has been giving special attention to the history and situation of the Armenian community in the world. In 2013, former RCH Presiding Bishop, Gusztáv Bölcskei met Catholicos Karekin II of All Armenians, the supreme head of the Armenian Apostolic Church, at the World Council of Churches General Assembly. In 2015, the RCH Synod issued a declaration on the 100th anniversary of the Armenian Genocide, and since 2016 the RCH treasures the partnership with the Armenian Evangelicals in the Middle East.

The schools encourage and strengthen the inclusive environment, allowing a safe space for Muslims and Christians to learn and live together. The schools run by the Reformed Churches in Syria serve as an important instrument in promoting love, inclusivity, and mutual understanding. The ten private schools of NESSL and the UAECNE take pride in the quality education provided for their 3 756 students. These church schools are well- known and greatly appreciated by their communities and the state. RCH has been supporting in cooperation with HEKS/EPER the operation of the schools through the Scholarship program dedicated to help the most vulnerable students. 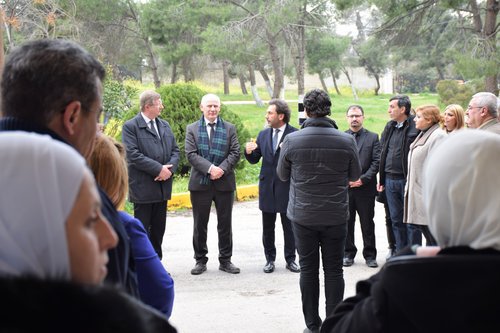 “Having seen all of this, three memories come to mind: my mother taught me to speak, my grandmother taught me to pray, and my first teacher taught me the alphabet. You are teaching all three to these children. May God give you strength and blessing in the work you do,” said Bishop Szabó to the teachers while visiting the Aleppo College for Girls of the Armenian Evangelical Community.

The delegation also visited the demolished Evangelical Church in Aleppo and the Armenian Evangelical Emmanuel Church. Both reconstruction and renovation projects of these churches have received Hungarian support. 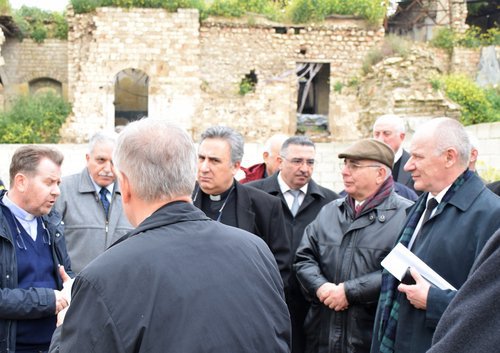 Rev. Joseph Kassab, general secretary of NESSL, and Rev. Ibrahim Nseir, local pastor, with the engineers responsible for the project, explained the reconstruction that will place in the Old City of Aleppo. During the siege, the building of the NESSL Church of Aleppo was hit by missiles and completely destroyed by rebels by an underground explosion. Thankfully no one was in the building. After the bombings, the community worshipped in an apartment and then moved to a new church building. NESSL plans to build a community conference center in place of the former church, giving space for various activities. The funds from the Hungarian Government are contributing to the construction plans.

The Hungarian government funds are also to be used for the renovation and extension of the Armenian girl’s dormitory in Aleppo, and the boy’s dormitory run by the Arab-speaking church. Furthermore, some of the funds are allocated for the renovation of Bethel’s church centre, and for the extension of the doctor’s offices operated by them. The Armenian community’s school buses that have been destroyed during the war are also to be replaced, and the humanitarian programmes of both churches are also to be financed this way.

In 2017, the RCH delegation visited the Armenian Evangelical Emmanuel Church which was also suffering major damages. Through the German Aid organization, Gustav Adolf Werk, the RCH also contributed to the renovation project of the Armenian Evangelical Church in Aleppo. Along with the funds from the Hungarian Government, the renovation was completed, allowing the church community to worship in their church building once again. 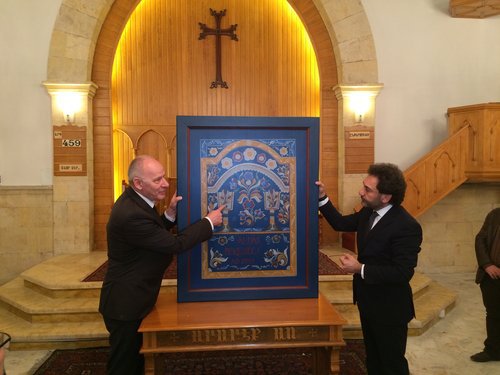 The RCH delegation joined in the thanksgiving service with the congregation of the Emmanuel Church. Bishop Szabó presented the community with a painted wooden panel depicting a pattern typical in a Southern Transdanubian village, Kórógy, with the sign saying ‘Áldás, békesség,’ the customary greeting among members of the Reformed community in Hungary, meaning ‘Blessing and peace’.

When the delegation visited the Old City of Aleppo, they saw the ruined churches, mosques, and other sites of cultural heritage. As the local hosts said, terror did not select among religions: it targeted civilization, as Christianity and Islam is part of it, terror worked to demolish both.

The delegation enjoyed the hospitality of both the Evangelical Church in Aleppo and the Armenian Evangelical Bethel Church. Concluding the program in Aleppo, the delegation worshiped in both congregations on Sunday. 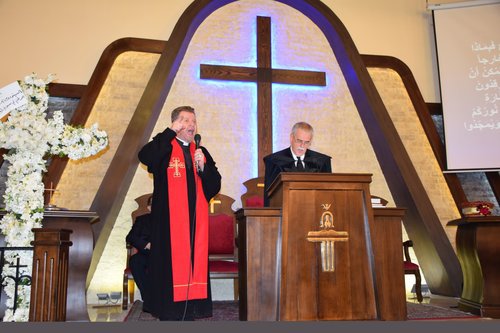 In the Evangelical Church in Aleppo, Dean Zsigmond Vad gave a sermon on Matthew encouraging the congregation to continue to be the light of the world and salt of the earth as it has been doing through its dedicated service in their educational ministry, the Sunday school project, and the planning of a policlinic in the near future.

Bishop István Szabó gave a sermon in the Armenian Evangelical Bethel Church. On Isaiah and Luke, he spoke of the resurrection that gives hope in the midst of hardships.

“We believed that God also threw Him away – but He bore our pains! We hoped in vain that He would resurrect His people – but God resurrected Him! We thought that we hoped for peace and blessing in vain – but He conquered death through His own death! We thought we could never return home – but God turns our misery into something good. We thought that evil would never end – but God has kept all of His promises. We thought one thing – but God thought another. We cannot stop thinking about evil – but God has ensured that there is good in this world.”- Read the full sermon of Bishop Szabó

The worship celebration in the Bethel Church concluded with a presentation from the Sunday school kids. Márton Juhász, CEO of the Hungarian Reformed Church Aid (HRCA), talked of the relaunching of the HRCA campaign for the Sunday school project. He emphasized that by supporting this project, they are also supporting the future generation of Syria. 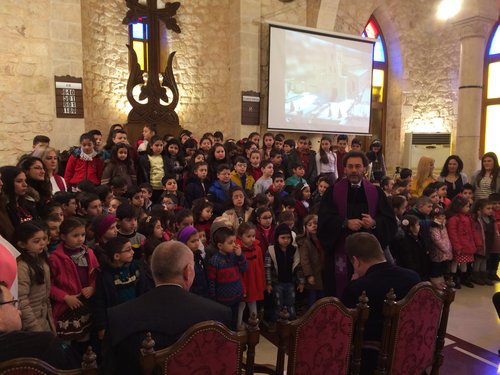 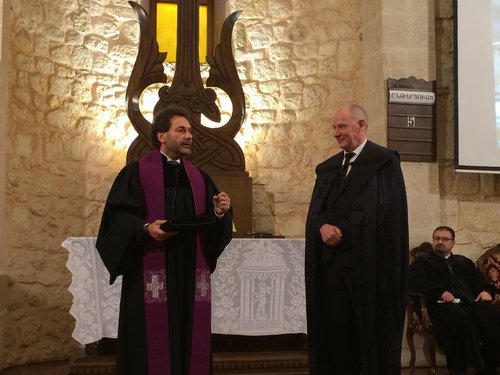 After worship, Rev. Harout Selimian and Bishop István Szabó paid tribute to the memory of the martyrs of the Armenian Genocide by laying wreaths by the memorial monument of the Bethel Church.

During fellowship with the three Armenian Evangelical churches, Rev. Selimian introduced the different ministries of the Armenian Evangelical Bethel Church such as the educational ministries and the policlinic. Gyula Sümeghy, the director of International Relations at Károli Gáspár Reformed University, gave a short presentation on the study programs at the University and the scholarship opportunities for Syrian young people made possible by the Hungarian Government. 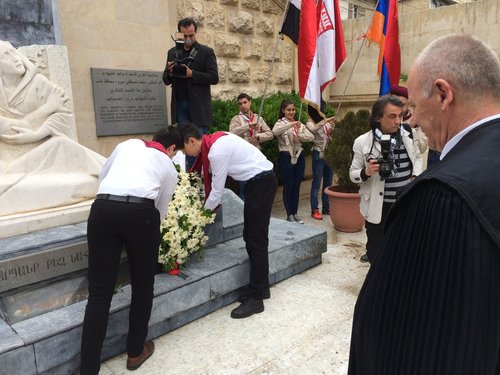 The solidarity visit, with all its challenges, deeply inspired and moved the delegation members. This provided them with the opportunity to meet, carefully listen, and engage in conversations with local people from different denominations and religions on burning issues such as migration, minority situations of the Christian churches in the region and the RCH church leaders were able to experience and receive first-hand impressions. Throughout the journey, the delegation was accompanied by Rev. Harout Selimian, President of the Armenian Evangelical Community in Syria and pastor of the Armenian Evangelical Bethel Church.

The Armenian Evangelical Community in Syria, the National Evangelical Synod of Syria and Lebanon, and the Reformed Church in Hungary wish to see this partnership, affirmed by the signed memorandums of commitment, grow further in various levels.

The RCH delegation included representatives from various levels of church life both men and women, lay and ordained and young people: