The Scottish Mission in Budapest recently celebrated its 175th anniversary and members of the RCH and the Church of Scotland participated in the Jubilee. A delegation from Scotland traveled to Budapest to join in the festivities and even stayed for the following week to tour the city and see the church’s historic connections.

The Church of Scotland (CofS) and the Reformed Church in Hungary (RCH) have links going back to the early days of the Reformation. Beginning in 1841, with the arrival of the first missionaries, a special relationship developed between the two churches, manifested in the Scottish Mission in Budapest (more recently referred to as St Columba’s Church). The 175th Anniversary Jubilee of the Scottish Mission in Budapest was, at its core, a celebration of continued community and solidarity between the two churches.

In preparation for the Jubilee, the RCH and the Scottish Mission worked together to build two new websites for the event. One site is fully dedicated to the Jubilee celebration and spotlights the history of the Mission and its impact in Budapest, while the other website serves as renewed homepage for the congregation itself. 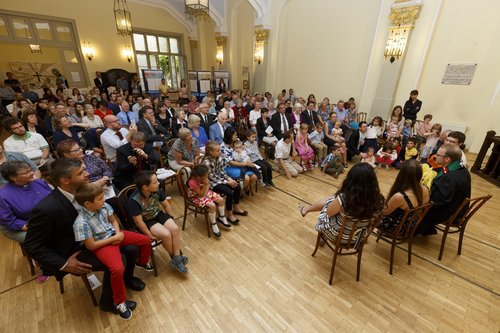 Given the historical and contemporary importance of the partnership, prominent members of both the RCH and the CofS were in attendance for various celebrations throughout the week. The delegation from the CofS included members of the World Mission Council, a former Moderator of the General Assembly, the current Moderator of the National Youth Assembly, as well as CofS members who are connected with the International Presbytery. Those representing the RCH included the Presiding Bishop Dr. István Szabó, former Hungarian ministers from the Scottish Mission, as well as former bursary students who studied in Scotland due to generous support from the CofS. Associations, communities, and congregations whose history connects to the Mission were also in attendance.

The main celebration of the Jubilee was held at the Scottish Mission on Sunday September 18 and involved a full day of programming coordinated by Rev Aaron Stevens, Minister at the Mission. The day began with a worship service at St. Columba’s in which the Very Rev. Angus Morrison, Moderator of the 2015 CofS General Assembly, gave a sermon. Others involved in the worship service included Rev. Iain Cunningham, Convener of the CofS World Mission Council, and Dr. István Szabó, RCH Presiding Bishop.

Rev. Ian Alexander, Secretary of the CofS World Mission Council; Susan Brown, Convener of the World Mission Council Europe Committee; and Andrew MacPherson, Moderator of the National Youth Assembly, were also active participants in Sunday’s events – bringing greetings and gifts to the congregation during the Jubilee. 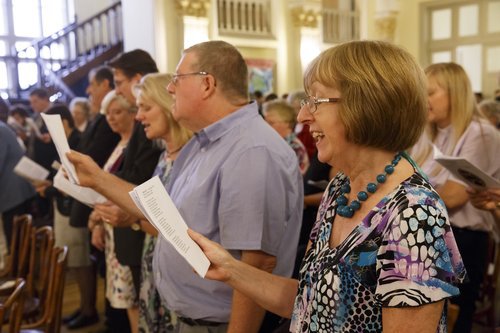 Following the worship service, Mr. Iain Lindsay, UK Ambassador to Hungary, gave words of welcome to the guests and then officially opened the multimedia exhibit about the history of the mission with the help of RCH Presiding Bishop Dr. István Szabó. Once the exhibit was open, participants milled around the room reading banners on topics such as spiritual renewal in the Scottish Mission, community outreach, the Mission School where Jane Haining spent her days, and what it means for a church to be a place of welcome those on the margins. With all these topics in mind, participants then broke up into smaller groups for more in-depth discussions on the history of the Scottish Mission and how its story of welcome is still applicable in our lives today. 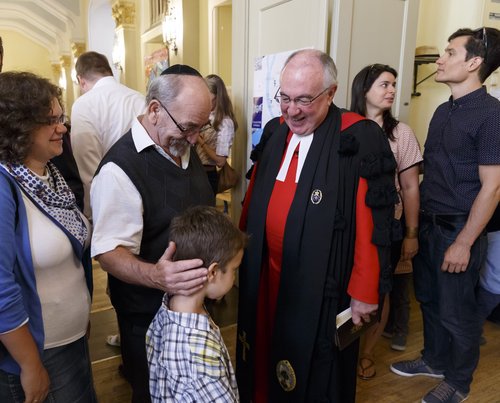 Sunday evening was filled with dancing and a showcasing of talents as the congregation hosted a traditional Scottish ceilidh. Members of the church, Scottish guests, clients of the RCH Refugee Ministry, and the wider Budapest community all gathered together to dance the night away in the perfect embodiment of how the Scottish Mission continues to carry out its work to this day. 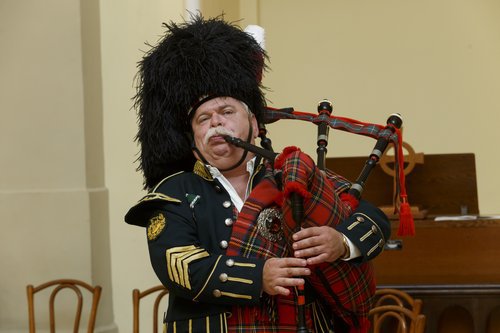 The following week was a chance for those Scottish visitors who extended their stay in Budapest to really get a sense for the city and all of its connections to the Scottish Mission. Members of the congregation came together to provide the Scottish delegation with an in-depth experience of the Mission in Budapest.

Visitors had the chance to visit many important sights around the city that have a historical connection to the Mission, including the Chain Bridge, the Jane Haining Embankment, and Vörösmarty Mihály Elementary School.

The Scottish Mission in Budapest has a long and rich history in the city. Since its founding in 1841, the Mission has formed connections and relationships with people all over Budapest. Check out the Mission’s Jubilee website to see an interactive map of these connections and learn more about them.

Beyond these sights, visitors from the CofS also had the opportunity to speak with prominent members of the Budapest community who are connected to the Mission. Rev Imre Bence, Dean of Buda Lutheran Presbytery and pastor of the Lutheran Church on the Buda Hill and Miklós Czenthe, Director of the National Archive of the Lutheran Church in Hungary, and spoke to the group about the connections between the Mission and the Lutheran Church on Buda Hill as they were both supported by the  Archduchess Maria Dorothea. The group also had the chance to speak with Ms Heni Kiss, Vice President of The Federation of Hungarian Jewish Communities (MAZSIHISZ), about the current state of Jewish-Christian relations in Budapest and the ways in which the Jewish community honors the memory of Jane Haining, a Scottish missionary who was taken to Auschwitz for her work with Jewish and Christian girls at the Mission School. On the same day, the CofS delegation also got to hear first-hand about the life of Jane Haining as former pupils of the Mission School gathered together to speak with the group about their experiences with the Scottish Mission. 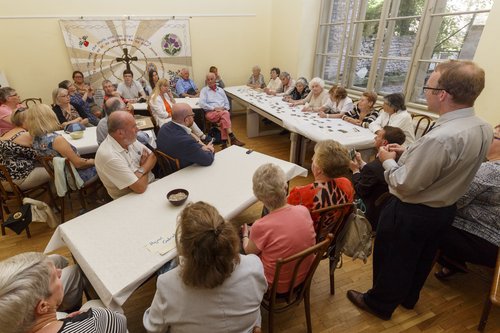 The group’s final day in Hungary was spent in the city of Debrecen, often called the Reformed Rome, where they met with Rector Bishop Bölcskei, heard a lecture from Dr Ábrahám Kovács, the preeminent scholar in issues pertaining to the Scottish Mission in Budapest, and attended a wreath laying ceremony at the Memorial Plaque the 150th anniversary of the CofS Bursary Scheme. Visitors also had the pleasure of visiting the Great Church and meeting with former Bursary students, including Professor Dr Botond Gaál, from Debrecen Reformed Theological University, and Zsigmond Vad, Dean of the Debrecen Reformed Presbytery.

The Jubilee celebration aimed to draw the attention of the wider community to the full story of the Mission. Oftentimes, people have only heard the stories of Jane Haining – they have seen her face many times and knew of her bravery in the face of danger and of her fierce loyalty to her girls at the Scottish Mission School. Over the week, however, visitors at the Jubilee learned that Jane’s story is one important piece of the picture of the Scottish Mission and that work to promote tolerance and justice is still being done at the church to this day. Those who participated in the celebrations learned more in-depth information about the saga of the Mission, including its vital diaconal work over the years, how it has been a place of shelter for those in need, and the role it played in fostering spiritual renewal in the RCH. The story of the Mission is rich and the Jubilee celebrations were an excellent way to highlight contributions from both the RCH and the CofS that have paved the way for the current Mission.

To keep the 175th Jubilee celebration going through the end of the year, the Scottish Mission is inviting former Hungarian pastors at the mission to preach for one weekend each month. Rev Bertalan Tamáspreached a service in October, Rev Dr. Ottó Pecsuk will preach one Sunday in November, and Rev Zoltán Tarr will preach in December.